As he held the MIAA A Conference lacrosse championship plaque late Friday evening, McDonogh School coach Andy Hilgartner wasn’t thinking about finally having the thing that’s eluded him and the program for more than a decade.

Hilgartner’s top-ranked squad brought a huge collective smile to Eagle Nation, winning the MIAA A crown with an 8-5 victory over No. 2 Boys’ Latin School in front of 4,825 at Johns Hopkins University’s Homewood Field.

McDonogh, ranked No. 3 in the nation by Inside Lacrosse, itched away from the Lakers in the second half to win its first MIAA A championship since 2005. The Eagles lost to St. Mary’s in the final at Homewood last year.

The last thing was on the board was 13-8 St. Mary’s over McDonogh. That’s really ate at us.”

With an experienced returning nucleus, McDonogh was considered the favorite, although its had heartbreak in the postseason the last several seasons. This year, the Eagles had a steely resolve – going wire-to-wire in the MIAA A, including a 10-9 double OT decision over Boys’ Latin a couple of weeks ago at John W. McDonogh Stadium.

McDonogh trailed 7-3 entering the fourth, and 9-7 in the latter stages of regulation.

“It pushed us to the brink. It was a big game for us,” said Hilgartner.

No comeback was needed in the highly antipicated rematch Friday. The Eagles never trailed, opening up a 7-3 advantage in the fourth.

Sarro, one of 14 seniors, started the Eagles’ path to the crown. He scored twice inside of 40 seconds, turning a 4-3 halftime advantage into 6-3 midway through the third quarter.

“We were just playing fundamentally sound offense. They were playing good defense – a zone the entire game. We just played our game – move the ball fast, move our feet fast and we were able to put the ball in the net.”

“Everybody stepped up including myself. We had guys come out nowhere putting up goals every game,” said Lanier. “To be honest, our six guys on defense are the six best in the country. We communicate with each other. Nobody can stop us when we play our game.”

McDonogh won its final 14 decisions, including three overtime decisions. Monday, the Eagles posted one of the most lopsided decisions in MIAA A semifinal history – a 20-6 victory over Loyola Blakefield.

After receiving the championship plaque, McDonogh players ran over to the sidelines and gave it Senft, a junior, who was left paralyzed after a swimming accident in New Jersey two summers ago. The words “Archer Strong” are at the bottom of the Eagles’ uniform jerseys.

Friday, it was “McDonogh Strong.”

“It’s been a lot of years of hard work by our program. There are lot of guys who have say in this championship, the alums and especially the guys that’s been playing since 2009,” said Hilgartner, who became coach in 2009. “…This team earned it, but without the foundation that’s been built by the teams before, it wouldn’t had happen.” 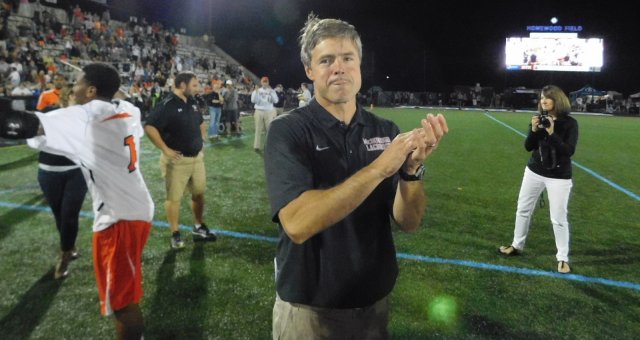 MSJ makes three in a row