McDonogh School and Notre Dame Prep would have been hard pressed to produce a game with more of a dramatic conclusion than the one they staged in the final game of the Interscholastic Athletic Association of Maryland A Conference regular season just over a week ago.

That’s when freshman attacker Blake Cunneen scored with 23 seconds left in regulation to give McDonogh a taut 1-0 victory over the Blazers. But the rivals outdid themselves in the league championship game Friday night at Stevenson University’s Mustang Stadium.

In a wild finish on an untimed penalty corner after the final seconds ticked off the scoreboard clock, sophomore attacker Katelyn Whittle slapped in a shot on an assist from senior midfielder Andie Aldave to give the fifth-ranked Eagles (15-4, 9-4 conference) another 1-0 triumph and their second title in three years.

Whittle said that she couldn’t remember much about the play, other than it was the game winner.

“It’s amazing,” she said. “I barely remember it, but it’s just so awesome.”

What she does recall is how McDonogh (15-4 overall) was able to overcome No. 2 Archbishop Spalding, the tournament’s top seed and defending champ (in semifinals), and Notre Dame Prep (14-5) in back-to-back matches to take the title.

“We were getting tired in the first half (against NDP). We just fought as hard as we could in the second half,” Whittle added. “We worked so hard, we pushed so hard. This is all we’ve been playing for this season.”

McDonogh’s best chance in the opening period was thwarted by NDP senior goalie Lucy Lowe, who bolted out of the cage to kick a ball skidding toward the goal out of harm’s way .

In the second half, Lowe was also up to the task when she stopped a high and hard backhander by senior Parker Wolf with six minutes left in regulation. Earlier in the period, Cunneen barely missed wide from a sever angle near the goal.

The Blazers (14-5) had a couple of near-misses as well, including a wicked drive by sophomore midfielder Rachel Borzymowski that caromed  off the pads of McDonogh senior goalie Nadia Hyatt.

In the first five minutes of the opening half, NDP was forcing the issue by earning three of their eight penalty corners. Still, for the second game in a row, the Blazers came up empty against McDonogh’s tough defense.

“Our front line is so fast, and we control the ball so well,” McDonogh coach Denise Wolf said, noting that although Eagles were wary of NDP senior scoring threat Grace Haus, they needed to concentrate on other Blazers as well. “We doubled effectively all over the field, so we didn’t have to single out one player.”

“They have a very good corner unit,” she said.

She added that, despite the loss, the Blazers’ program is on the rise after vying for the school’s first IAAM crown.

“The hockey at this level just doesn’t get any better than this,” she said about the game and her team’s performance. “I inherited a lot of very talented veteran players and we have a lot of young hockey heads, too. They meshed and gelled. For us to come from being unranked to the being ranked in the top 10….we just had a great season.” 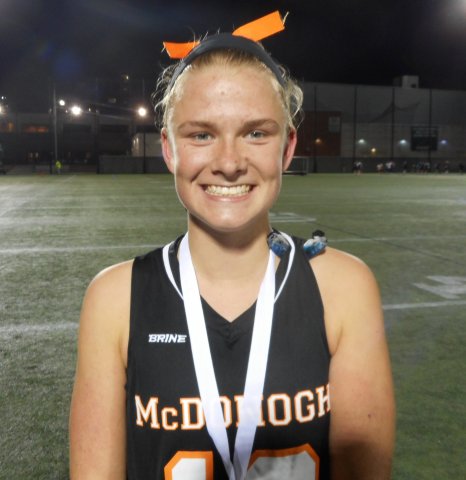 So did McDonogh, which welcomed a new coach this season in Wolf, its third in as many seasons. The Eagles, who’ve been in the final the last four seasons, lost to Spalding in the 2015 title match.

Whittle said that there was nothing fancy about her team’s effort Friday.

“We stuck to our game, and played good, fundamental defense,” Whittle said. “We all ran our hearts out. We did everything we could.”