Archbishop Spalding, facing a pitcher who had dominated them one week ago and trailing 2-0 in the third inning of Monday’s MIAA A Conference baseball finals, dug deep to push past a red-hot John Carroll squad and go on to a 7-2 victory at Harford Community College.

The victory clinched the Cavaliers’ fifth league title and their first since completing a three-peat in 2016. It also allowed them to complete a 17-0 season against MIAA A Conference competition (league and playoffs) becoming the first A Conference to club do so since the 2007 Calvert Hall team. 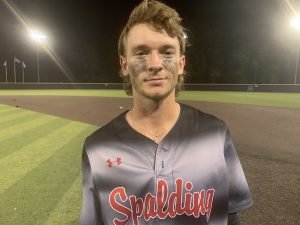 Archbishop Spalding senior ace Eddie Sargent went the distance in the MIAA A Conference finals, striking out 12 batters and leading the Cavaliers to a 7-2 win over John Carroll for their fifth A Conference title.

Senior pitcher Eddie Sargent went the distance for Spalding, throwing 96 pitches and allowing just two hits, while striking out 12. He overcame a brief bout with wildness, in the second inning, but was unthreatened the rest of the way.

“They got a base hit, I couldn’t find the zone for a little while and they squeaked one through,” said Sargent of the third inning where he surrendered his only two runs of the night. “I tried to find the fastball. The fastball command sets the tone for me to be able to throw the curveball off of the fastball. Once I found the fastball again I was back dealing.”

Sargent allowed just two hits and one of those was of the infield variety and he had two strikeouts or more in five of the seven innings.

With Sargent and John’s Carroll’s Matt Archibald breezing through the first two innings, it appeared as if the game might be heading to a similar outcome as the Cavaliers’ 1-0 win over the Patriots one week ago in the second round of the tournament. In that contest, Archibald threw six shutout innings, with 12 strikeouts and he allowed just three hits before leaving the game. Spalding won the game with a run in the bottom of the seventh.

After that loss, John Carroll battled its way back to the finals with consecutive wins over Loyola, Archbishop Curley and Calvert Hall and sent Archibald to the bump in hopes of forcing a second game and a chance at the title on Tuesday. Things appeared to be going according to plan when the Patriots (16-12) jumped on top with two runs in the top of the third.

Matt Bishop legged out an infield hit to start the rally. Griffin Shirk followed by drawing his second walk of the game and Archibald also drew a free pass to load the bases. Ethan Ruiz then stepped up and banged a sharp single through the right side to plate a pair of runs.

Still not out of trouble, Sargent issued an intentional walk to Frank Adamski to reload the bases and then escaped without further damage with a strikeout of William Rhine, his fifth of the game.

Spalding (26-4 overall) answered right back in the bottom of the third, finally getting to Archibald who, like Sargent, battled a momentary loss of his command.

The Patriots’ ace walked the first three batters in the inning, before striking out Braeden Piotrowski for the first out. Caleb Estes, however, ripped a shot past the third-base bag and into the left-field corner for a two-run double, before Archibald rebounded with a strikeout and a ground out to keep the game tied, 2-2.

“It would be easy for our guys to say we’re not going to score off of him because we haven’t done it in eight innings and we can come back tomorrow and try again, but that’s not this group,” said Spalding head coach Joe Palumbo in describing the importance of those two runs at that point in the game and their impact on Sargent.

“I think he knew he was battling another great arm over there and he had to find another gear. Our guys gave him a lot of confidence by scoring those two runs. It was a reset for him and he found another gear in that reset and started working in his slider a little bit more and spotting up his fastball. He has prepared for this game for four years. He wanted the ball and he wanted the ball for seven innings and he was awesome today.” 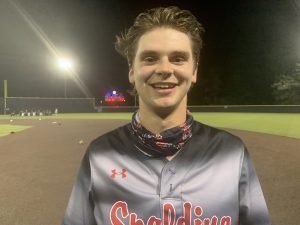 The Cavaliers edged in front in the third on a two-out bloop RBI single to right off the bat of Brady Hannon. Kyle Garrett, who legged out a one-out infield hit and later stole second, scored on the play.

Archibald departed prior to the Spalding sixth, after throwing 93 pitches, and the Cavaliers took advantage of his departure to tack on four more runs.

Reliever Ben Pierce hit Matt Gormley and walked Kyle Garrett. Pierce then went to a 3-1 count against Hannon before being pulled in favor of Kyle McCracken. Against McCracken, Hannon executed a sac bunt to move both runners into scoring position with one out.

Ethan McNally was then hit by a pitch to load the bases and Sargent walked to chase home Spalding’s fifth run. McCracken got Piotrowski to pop out to second and appeared to get out of the inning when Estes skied out to center. However, a balk was called on the play and Estes got a second chance as both runners advanced. Estes then bounded a ball to short and was safe as the ball skipped past Patriot first-baseman Frank Adamski, allowing the final two Spalding runs to score.

With the victory close at hand, Palumbo sent Sargent back out for the seventh to close things out. He responded with a 1-2-3 inning with two strikeouts, including a swinging third strike on Austin Hoffman to end the game, before he was mobbed for a wild celebration on the mound.

Sargent was grateful for the opportunity to finish what he started.

“It means a lot,” said the senior. “Coach had the confidence in me. Especially to send me out for the last inning even though he knew my pitch count was getting up there. It just meant a lot and these guys trusted me. That gave me a lot confidence. Those guys mean a lot to me.”

Estes, a senior headed to play at the University of Maryland next year, said his team had been pointing towards this moment since losing to Gilman in last year’s tournament finals.

“For 364 days we prepared for this very moment,” said Estes. “It was a gut-check that quarterfinal game, that 0-0 game. It was a great game. You just have to commend John Carroll, especially fighting off the loser’s bracket like that. They worked their tales off. It’s been two phenomenal games with them during this playoff run and we just didn’t want to have that feeling again and man did we not.

“It’s hard to beat a team four times, let alone beat the best guy we faced all season twice in a week’s span. This is just an unbelievable experience. I’m happy for my guys. Words cannot describe how I am feeling right now.”

“It’s a credit to Joe and the Spalding team,” said Siler. “They are a phenomenal group of young men, a really tough group of ballplayers who play the game really well.

“We got the two runs and we couldn’t get the goose egg after that, which is very important. Sometimes you give away a little bit too much and teams which are well coached and have discipline are going to make you pay for it, and they did that.”

He also expressed great pride in this team.

“We scrapped, we scrapped,” said Siler. “Our motto is selfless relentless pride. Everything we do is built around those three things. We try to pass it on to the next guy or do something to help out the team and never give up.”

Palumbo pointed to unity as one of the key ingredients to his club’s rare success this season.

“This group is a special one for a lot of different reasons. They are close. They are best friends. They love each other and I think that was evident throughout our entire season.

“This league is tough to win one game, to be honest, and to win 17 and lose none is a testament to their hard work. They are willing to sacrifice and they deserve every bit of this. They’ve earned it.”