Archbishop Spalding basketball senior Ty Peterson said he didn’t have a great warmup before Wednesday evening’’s game against Our Lady of Mount Carmel. 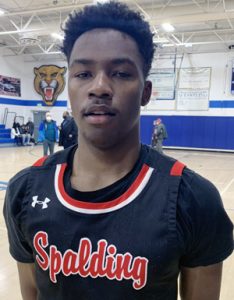 Ty Peterson had his finest hour for Archbishop Spalding basketball Wednesday evening. The senior guard scored a career-high 47 points as the No. 2 Cavaliers defeated third-ranked Mount Carmel in a MIAA A Conference/Baltimore Catholic League contest in Baltimore County.

By game’s end, Peterson had a performance for the ages. The guard scored a career-high 47 points, powering the second-ranked Cavaliers to a 96-74 decision over the No. 3 Cougars in a MIAA A Conference/Baltimore Catholic League contest in Essex.

In claiming sole possession of first in the MIAA A’s Black Division, Spalding (4-0 MIAA A) maintains its share of the top spot in the BCL (4-0) with No. 1 St. Frances Academy (4-0). The Panthers visit Severn Friday evening to settle, at least for now, who’s the best in the MIAA A, BCL, and the area.

There was little debate who was the best player on court on Old Eastern Avenue Wednesday evening. The 6-foot Peterson dropped eight 3-pointers.

His six-of-seven effort from the free throw line in the second half was just as important for the Cavaliers, who weathered a Mount Carmel rally.

After getting mobbed by his teammates before the postgame handshakes, Peterson said he was more impressed with the win.

“Obviously they’re (Mount Carmel) a well-coached team. We haven’t beaten them in a while so it feels good on this stage,” said Peterson.

“I appreciate my teammate for encouraging me. I’ve struggled at the beginning of the season,” he added. “If anyone had scored 47, it would be the same reaction. This is a brotherhood.”

Though Whitmore, the area’s top prospect headed to Villanova University, is often the center of attention, Spalding coach Josh Pratt said every player has had an equal stake in the team’s success.

“I’m so proud of Ty…sometimes he gets lost in the shuffle and he’s a very very good basketball player,” said Pratt.

Peterson had 26 points in a frenetic opening 16 minutes as Spalding, which trailed 5-0 in the opening seconds after being assessed a technical foul for a pregame dunk, led 51-32 at halftime. Peterson accounted for six of the Cavaliers’ 11 “splashes” from behind the arc.

Spalding cooled to start the second half and Mount Carmel (5-1 MIAA A Black, 4-2 BCL) took advantage. The Cougars scored the first 15 points, capped with Andrew Dixon’s runner, closing to 51-47 with 5:15 remaining in the third quarter.

Peterson, weaving through traffic to the foul line, dropped a bounced pass inside to Whitmore, who finished with a one-handed dunk, making it 53-47. The Cavaliers pushed the lead back to double-digits, 63-53, late in the third as Scott got a pass from Peterson and converted a baseline drive.

Seconds later, Peterson drove to the basket and got an off-balance attempt to fall off the glass.

“It’s not a situation we haven’t been in before,” said Peterson. “It’s trust in our game and doing what we can do individually to bring it all together.”

It fell into place for the Cavaliers, who pulled away in the fourth with 33 points. Peterson capped his record night with a layup with 10 seconds left.

Perry, one of the area’s elite backcourt performers headed to Loyola University, tipped his hat.

“We weren’t expecting him (Peterson) to score that many points, good on his end,” said Perry. “He took what we gave him and did what he had to do.”

“They (Mount Carmel) shot the ball unbelievably…that’s really not their forte, but they took advantage,” said Cougars coach Trevor Quinn, whose team’s nine-game winning streak was snapped. “We got it down to four twice, but every time we got close, momentum was taken away.”

“We haven’t beaten St. Frances since my freshman year so I’m definitely looking forward to it,” said Peterson. “Hopefully, we can do the same things we did tonight, even better.”