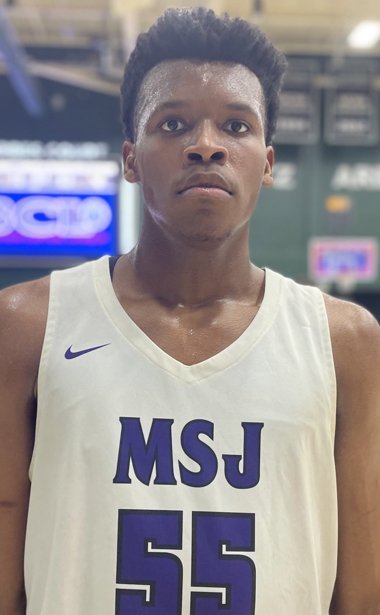 PLAYER OF THE YEAR

When Amani Hansberry decided last summer to transfer to Mount St. Joseph, many high school basketball pundits in the DMV (District-Maryland-Northern Virginia region) believed the versatile post would have an impact.

Hansberry, the VSN’s Boys Basketball Player of the Year, surpassed expectations. The St. John’s College (D.C.) transplant powered the Irvington school to its first final No. 1 ranking since 2017.

The 6-foot-7 junior averaged 20.3 points, 13.6 rebounds and 4.3 assists this past season for the Gaels (32-7 overall), who won the MIAA A Conference and Baltimore Catholic League Tournament championship crowns.

“Once he got entrenched, he became an inner force,” said Strickler. “Passing the ball, playing strong at the rim…he became the leader over time.

Hansberry, arguably the top junior in the DMV, felt a connection with Mount St. Joseph.

“The relationship, the family, the brotherhood,” said Hansberry, a Montgomery County resident. “It’s not fun if you’re not with a family. Why not be with a family and do big things.”

Hansberry was ginormous as Mount St. Joseph became the first team to sweep the MIAA A/BCL postseason events for the first time since 2015 (Calvert Hall College).

In the terse closing seconds against Our Lady of Mount Carmel in the MIAA A final at Harford Community College, Hansberry methodically worked a defender in the paint to score the go-ahead basket with 23 seconds left in a 63-60 victory. Hansberry finished with 15 points as the Gaels claimed their seventh MIAA A title.

In the BCL Tournament final at Loyola University, Hansberry posted 12 points and 21 rebounds in a 66-56 victory over St. Frances Academy, which swept Mount St. Joseph during the regular season.

Hansberry, who totaled 61 points and 52 rebounds in three games, was named the BCL tourney’s Most Valuable Player. He was the Most Outstanding Player at the Alhambra Catholic Invitational Tournament at Frostburg State, and MVP at the Benedictine Christmas Classic in Richmond.

“Amani’s just a factor on both ends of the floor, the rebounds, his defensive presence, his ability to pass and score,” said longtime Mount St. Joseph coach Pat Clatchey. “Terrific player.”

Hansberry, who has nearly two dozen early scholarship offers, including from Maryland, Kansas, Miami and Providence, is the first Gael selected VSN Player of the Year since Jalen Smith (Maryland/Milwaukee Bucks) in 2018.