The table has turned

After going undefeated in league play during the 2015-16 season, including a pair of wins over Saints Peter & Paul, Key School suffered a heart-breaking loss to the Sabres in last winter’s MIAA C Conference championship game.

This disappointment of that loss lingered into this season, as the Obezags twice surrendered large leads to Saints Peter & Paul, losing both contests by a combined total of four points. On Sunday afternoon, at Harford Community College’s APGFCU Arena, all was made well in the Key School basketball universe as the Obezags avenged their previous losses to the Sabres with a 53-42 victory in the MIAA C Conference title game.

The Zags certainly had a few tense moments, as once again SPP chased down a big lead by Key, coming from eight back to tie the contest, 22-22, in the third quarter. This time, however, the Obezags had the finishing kick, closing the third quarter with a 10-4 surge and never looking back until they had pocketed the title. It was Key’s second MIAA C Conference crown and its first since the 2007-2008 season. 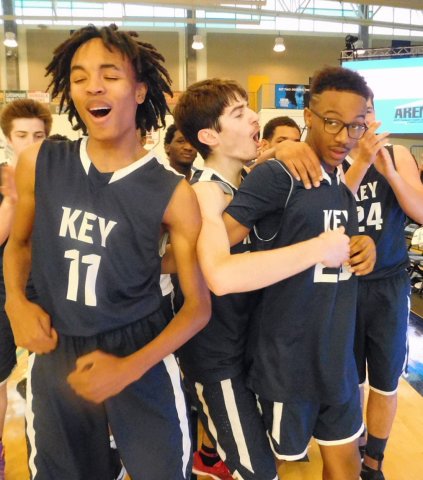 The victory sent nine Obezag seniors out on top, including Jimmy Holland, who paced Key with 15 points, including seven in the final quarter.

Holland, who missed last season’s title game with a knee injury, hit a three-pointer with 6 minutes, 50 seconds to play to start an 8-0 run by the Obezags (14-5) that turned a five-point ballgame into a 42-29 lead for Key. Holland scored five points in the surge from which Saints Peter & Paul never recovered.

Holland did recover from his lost opportunity of a year ago and proved to be his team’s decisive ingredient.

“I had to sit out last year,” said Holland. “I injured my knee. Our team went undefeated. It was amazing, but we missed the ‘chip. We lost in the big game. I felt bad, I wasn’t able to be out there with my friends. So, I worked hard this season to come back.”

The last obstacle to overcome was Saints Peter & Paul.

“We lost to this team twice,” added Holland. “They were close games. Both times we felt like we had them and just let it slip away. We had the whole week off this week to prepare and coming in here, we had confidence.

“This is amazing. Four years in this, with nine seniors on our team. This is the last game for more than half the team. We couldn’t got out any better way.”

Another senior, guard Jelani Reid scored all five of his points in the opening quarter to help the Obezags got out to an earlier 13-7 lead. Things evened out in the second quarter, as the two squads combined for just 16 points, but Key grew its lead slightly, leading 22-14 at the halftime break.

In the third quarter, some of those old ghosts reared their head as Saints Peter & Paul came out of the break on an 8-0 run, fueled by a pair of three-pointers for sophomore Lamont Powell, Jr., to tie the contest at 22-22. However, a basket by Holland pushed Key back in front by two and the Zags closed the period with a 10-4 spurt to build a 32-26 lead heading into the final stanza.

Powell scored 10 fourth quarter points for the Sabres (14-10), including a three-pointer that pulled his team within 34-29 early in the fourth, and finished with a game-high 19. But, the Obezags responded with an 8-0 run to take a 42-29 lead with 4 minutes, 7 seconds to play and were never seriously challenged again. The Sabres clawed back with nine, with a little more than a minute remaining, but Key drained 5-of-7 free throws to go back up by 14, at 53-39, before emptying the bench.

“It’s been a long time coming.” said Key coach Joe Matthews. “We’ve worked hard. We were here last year. We beat them twice last year; they came back and beat us in the championship, so it’s nice for us to turn the tables. We’ve worked really hard over the course of multiple years to put the program in a place where we could win a game like that, and find a way to get over the mountain.”

According to Matthews, the difference this time was sustained defensive intensity.

“We have a tendency to get a lead,” added Matthews. “We pressure and then play conservative in the zone. Today, we kept the pressure up all the way though. Even with a  lead, with two minutes left, we were making them make decisions.”

In addition to the offensive production provided by Holland, Key got a dozen points from sophomore Elijah Jenkins and junior Amari Kelly.

Jenkins was happy the team could send the seniors out on top.

“It’s not really about me,” said Jenkins. “We have nine senior on the team who are leaving next year, so to come out here and get a win for them was pretty cool.”

Matthews felt the same way about the seniors.

“To the credit of [our] nine seniors, that’s a great group of guys,” said Matthews. “We did it the right way. They all went to middle school at Key. We didn’t bring in two or three recruits, junior, senior years. These guys know how to play together and I think they showed that today.”

Saints Peter & Paul coach Jeff Hollis felt his team gave the effort, but were just outplayed on this day.

“We never got it going,” said Saints Peter & Paul coach Jeff Hollis. “We made the run in the second half to tie it up. I thought it was a different game for us, but we didn’t get over the hump. Our first two games were really tight. I knew this was going to be a struggle and they just made way more plays than us.”