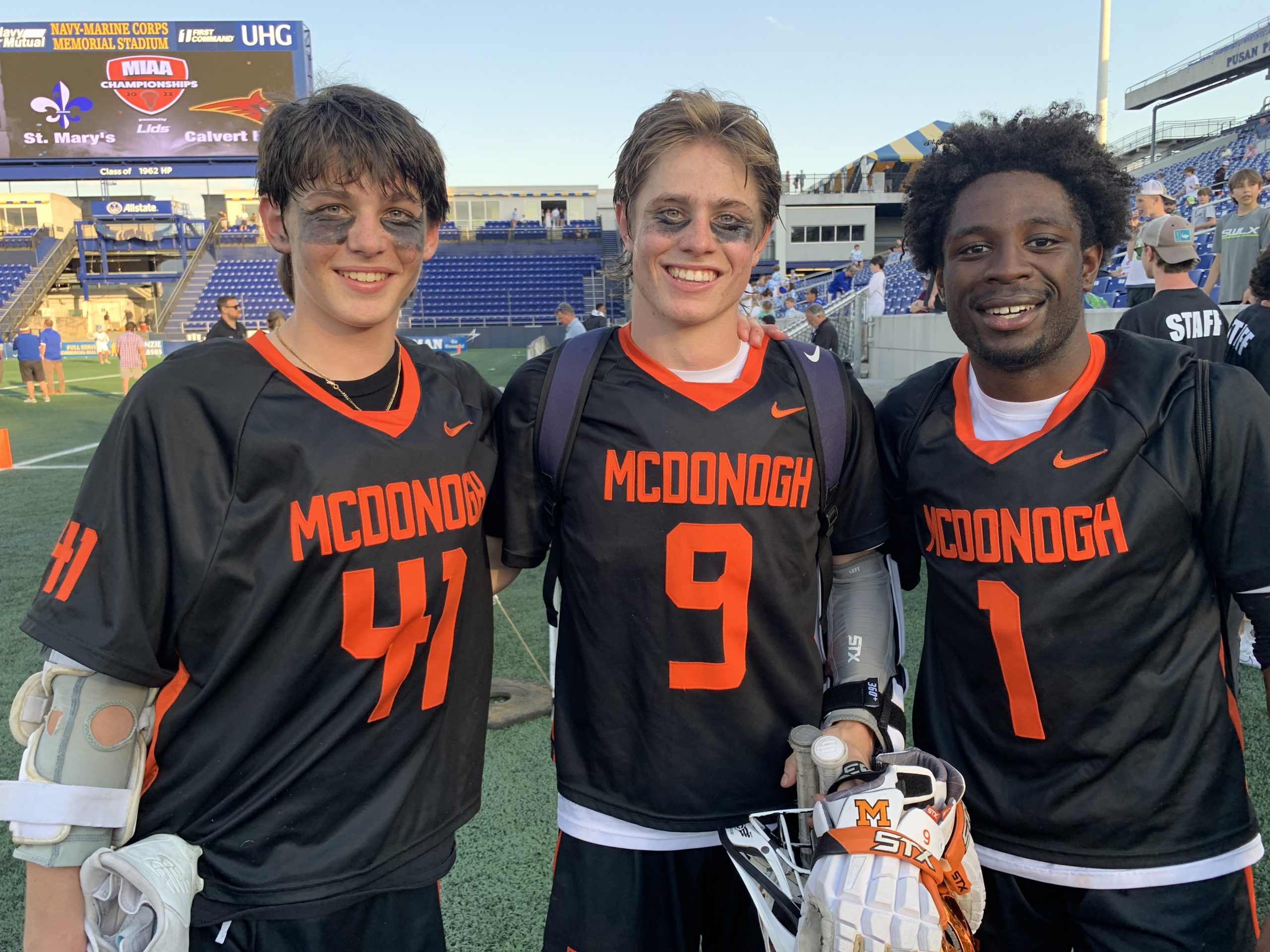 Millon, recently inserted into the lineup, is finding his way. Tuesday, the freshman provided the biggest highlight of the Eagles’ season.

His goal as time expired in regulation gave No. 5 McDonogh a thrilling 11-10 victory over second-ranked Boys’ Latin School in a MIAA A Conference semifinal match at Navy-Marine Corps Stadium in Annapolis.

The fifth-seeded Eagles (11-6 overall) will play No. 3 St. Mary’s, Friday evening at 7:30 p.m. in Annapolis. The second-seeded Saints knocked off top-ranked Calvert Hall College in the other semifinal Tuesday.

Floundering two weeks ago, McDonogh is now a win away from claiming ownership of the nation’s toughest boys lacrosse league for the first time since 2016.

Tuesday, the Eagles overcame a two-goal deficit in the final 6:34 to reach their first championship round since 2017.

“Our guys never gave up,”  said McDonogh coach Andy Hilgartner. “Boys’ Latin kept taking it to us, but I’m so proud of the guys after going down and coming back…we kept battling back and that’s the way our whole season’s been.”

“There’s something different about this team,” said McCabe Millon.

The Eagles trailed 10-8 after a bad clear resulted in Tyler Owings’ goal. The Owings Mills school got an extra-man chance, and Brendan Millon found Brown, whose goal closed the margin to 10-9 with 2:52 to play.

After a McDonogh timeout with 1:27 left, McCabe Millon planted a shot top shelf past Lakers goalie Cardin Stoller, tying the game with 53.8 remaining in regulation.

“They (BL) were zoned up on that possession. We tried to run a couple of zone looks and didn’t really get anything. He (McCabe) did what he does best, he make plays.”

The Eagles got the ball back with 11.5 seconds, setting the stage for the younger Millon. McCabe sent a pass to Brendan, who got past his defender and flicked the ball, as the horn sounded, wide of Stoller into the corner of the net for the game-winner.

“That was unbelievable,” said Brendan, who played his first match last week against Gilman. “Coming back from the injury I didn’t know if I’d be able to find my role with the team, but I definitely fit in. I’m so proud of the guys.”

“I’m speechless,” said McCabe. “Earlier in the year, we thought his injury was season-ending and didn’t know we’d get this opportunity together. I couldn’t be more grateful to share this with him.”

A year ago, Boys’ Latin ended McDonogh’s bid for a perfect season in the MIAA A semifinals. The top-seeded Lakers got out to a 3-0 first quarter advantage Tuesday, but the Eagles got off the mat.

Brown put the Lakers (13-4) up 9-8 with 8:59 left in regulation. The Lake Avenue school advanced the lead to 10-8 as McDonogh ace defender Malachi Jones’ clearing pass sailed high over goalie Anthony Wilson’s head and Owings got the ball and stuffed it in the net.

After the Eagles battled back to tie at 10, Boys’ Latin won the ensuing face-off, but turned the ball over with 11.5 seconds left.

Then, BL’s reign came to a shocking end on Brendan Millon’s shot.

Lakers coach Brian Farrell lauded his seniors for leading the squad back to Navy-Marine Corps Memorial Stadium and a chance at a second straight championship.

“They left a legacy,” said a disappointed Farrell.

Last year, Boys’ Latin as the fifth-seed rallied at Loyola before taking down McDonogh and Archbishop Spalding for the crown.

Now, it’s the Eagles spinning some No. 5 magic after being at  ground zero after a 10-4 home loss to St. Paul’s School two weeks ago.

“I think all the adversity faced, specifically against St. Paul’s, allowed us to come out here.” said McCabe Millon, “and ride and die for each other.”