The number 71 and the sixth inning proved to be the magical for the Loyola Dons of Blakefield —  7 runs in the sixth to make them No. 1 in the MIAA A Conference in 2017. The frustration of 71 years without a championship is history.

They were all there – parents, fans, administration personnel and alumni, including 89-year old Larry Smith from the 1946 Loyola Blakefield baseball team that last won an MSA or now MIAA title.

It didn’t look good after five innings on a dreary day at Harford Community College. After the Dons had upset the top two seeds in Calvert Hall College High School and Archbishop Spalding, they advanced to the MIAA A Conference finals of the double-elimination tournament but on Sunday Calvert Hall had dominated with a 9-0 victory to force the extra game yesterday. 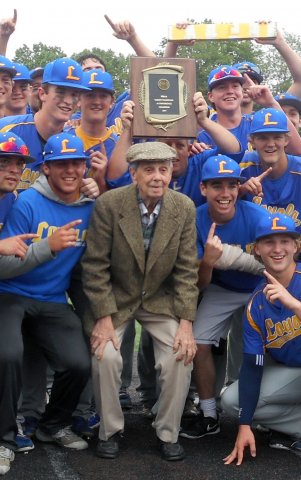 The Hall looked like a cinch to win their 28th MSA/MIAA title prior to the playback on Monday, but the Dons had other ideas.

Calvert Hall carried the 3-1 lead they had taken in the first inning to the sixth with righ-thander Andy Rosso in command. Then, it happened. After an out, Will Glock drew the first of what would be four walks and AJ Holcomb doubled off the left-field wall to put runners on second and third. The rally was on as the Dons scored seven runs on the way to an 8-3 victory to give the Loyola its first MSA/MIAA A Conference baseball championship in 71 years.

All four players who walked off Rosso and two other relievers, Brendan Maher and Dan O’Connor, scored and RBI’s came from Chris McDonald, Brent Peterson, Dom Dinoto, Jack Glock (2) and Jack Reinhardt. Another run came home on an error. The Dons scored the seven runs on five hits. They had not had a hit since the first inning when Will Glock knocked In Miguel Mateo who had doubled to the start the game.

The wild, crucial inning dealt Maher his first loss of the season (7-1).

Will Glock went the first five innings throwing 105 pitches to pick up the win, his first of the season. Glock gave up three hits, walked five and struck out six before giving way to Matt Wyatt who pitched the last two innings. Wyatt loaded the bases in the bottom of the sixth, walking two and yielding a single to pinch-hitter Justin Kerr, but escaped unscathed and then set the Cardinals down in order in the seventh.

The ’46 team also rallied from behind in the top of the sixth inning to defeat Patterson, 7-5, in the final to win the Dons’ first MSA crown since 1939.

It’s an understatement to say that the players and everyone associated with Loyola celebrated when Calvert Hall designated hitter Parker Landerwehr, who knocked in two runs in the Redbirds’ three-run first, popped up to second baseman Dom Dinoto in short right field to end the game and 71 years of frustration.

“This was great. These guys are better organized than we were back then,” said Smith, one of five living members from the 1946 team who really enjoyed being there to witness the big moment.  Brian Plunkett, former Loyola basketball playerwho works in the Development office at the school rounded up some of the survivors from that team of yesteryear that had a second baseman named Thomas D’Alesandro – yes, the former Baltimore City mayor.

But that was yesteryear and the 2017 team now has the honors of champion.

“We believed in each other even when we had some rough times and we put it together at the end,” said Holcomb, an outstanding junior hitter and third baseman who has committed to Virgina Tech.

Loyola is believed to be the first team with an overall losing record (13-14) to win the MIAA A Conference or MSA championship.

“The whole school wanted this so bad,” said first year head coach Mike Kelly, who had been an assistant to Jimmy Crowley for four years before the latter stepped down.  “There were guys here from the ’84 team that lost to Calvert Hall in the finals. We kept it close going into the sixth inning and when AJ doubled off the wall, it ignited our offense. AJ opened the flood gates and then Wyatt came on and did a good job.

“We were competitive with everybody in the league, had some ups and downs, but then put it all together at the end.”

The Dons went 9-9 in the MIAA A regular season defeating ranked teams such as Archbishop Spalding, Gilman and St. Mary’s twice and lost one-run games to Calvert Hall and Gilman. It wasn’t a great regular season, but it was a great tournament for the Dons.

Calvert Hall finished 27-4 overall – the most wins in the metro area – but coach Lou Eckerl’s Cardinals have no championship to cap it off thanks to their utmost arch-rival. That may be as frustrating as going 71 years without winning.

Aces of the diamond