Players and coaches introduced at Ravens’ Under Armour Performance Center

by Gary Adornato & Derek Toney
Team Maryland, entering its seventh year in its second stint as a participant in the Big 33 Classic with Pennsylvania, announced its 2019 roster on Saturday morning during a press conference at the Baltimore Ravens’ Under Armour Performance Center in Owings Mills.
The roster is a diverse mix from across the state with Baltimore County leading the way with eight players. Frederick County is represented by six players, while the MIAA and Howard County each have five players on the team. Four players are from Montgomery County. Anne Arundel, Prince Georges and Harford Counties, as well as Baltimore City, have two players each, while Carroll and Washington Counties have one each.
Thirty-four have already made college commitments, with two – Isaiah Hazel of Henry A. Wise High and Deonte Banks of Edgewood – headed to the University of Maryland. Collin Schlee, a 6-foot-4 quarterback and Kent State commit who guided Oakdale High School to the Class 2A state championship last fall, is one of the team’s two signal callers. Linganore’s Ryan Leyh (Shippensburg University) is the other. 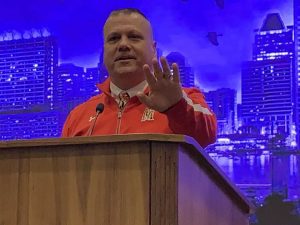 St. Paul’s School coach Scott Ripley will be the head coach for Team Maryland in the 2019 Big 33 Classic.

St. Paul’s School coach Scott Ripley, who has served as Team Maryland’s Executive Director since Maryland returned to the game, was also formerly introduced as the team’s head coach for the 2019 game. His staff will include Elwood Townsend (Woodlawn), Justin Cunningham (DeMatha Catholic), Russell Wrenn (Gilman School), Steve Rapp (Wise), Steven Erxleben (South River), Ken Brinkman (John Carroll School) and Mike Kraus (South Carroll).
Several of the players named to the team were on hand, as were members of the coaching staff, and game administrators from both Maryland and Pennsylvania. The Big 33, which has been contested since 1957, is the only all-star game which can boast that every NFL Super Bowl ever played has included at least one Big 33 alumni and there have been 52 Super Bowls.
Gary Cathell, Executive Director of both the Pennsylvania Scholastic Football Coaches Association (PSFCA) and the Big 33, spoke of the outstanding partnership that has developed with Maryland over the last six years.
“This is a partnership. We are a team,” said Cathell. “We had a 20-year run with Ohio, but we ultimately thought the best interest of the game was to get back involved with Maryland.”
Cathell also briefed the players and parents on hand for the press conference on what they can expect the week of the game, including their experiences with the host families and the community service projects in which they will take part.
Doug Duvall, President of the Baltimore Touchdown Club spoke of the impact Maryland’s participation in the Big 33 has had on high school football in the state.
“The Big 33 game, for the state of Maryland, is a huge thing,” said Duvall, who won five state titles during an illustrious 36-year stint at Wilde Lake before retiring after the 2008 season. “We have some great friends we’ve met up in Pennsylvania. It has really improved the quality of high school football in the state of Maryland. By playing, and beating Pennsylvania some times, it created greater notoriety for our players throughout the nation and it is a big honor for us.”
Also on hand for the press conference was Ravens’ offensive tackle Ronnie Stanley, a former 1st round draft pick, who greeted the players and provided a few words of encouragement. 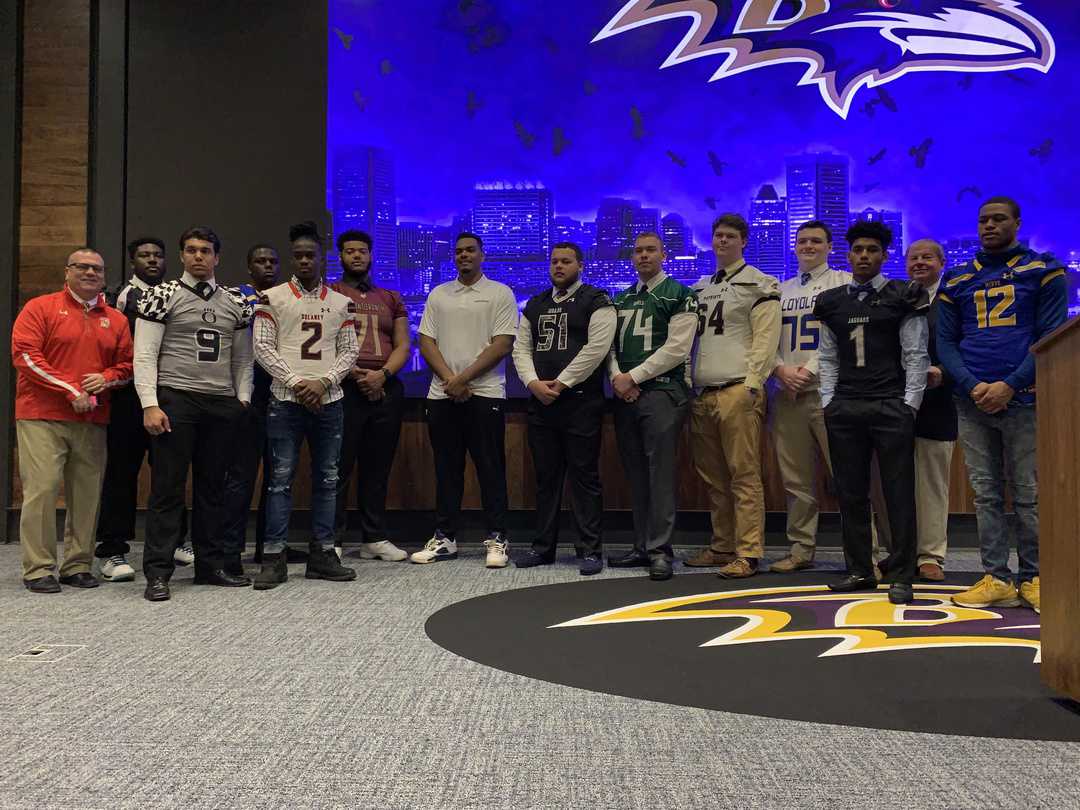 “High school football to me was definitely the most positive and fun time I had playing a sport,” said Stanley. “You are with all of your friends. My friends from my high school football team are actually my closest friends now. Those values I learned in high school, I’ve carried on to this day. I hope to see you guys playing on the next level, but down the line there will be some tough times, when you will have to rely on something deep inside you, and some of those things you learned in high school.”
Ripley, who joked that he was appointed head coach when he missed a meeting, expressed his pride on the growth in stature the game has received in Maryland.
“This is a great, exciting day,” said Ripley. “We’re at a point, finally, where everybody (in Maryland) knows this is a big game. I’m excited about being the head coach. I’m excited about the roster we have. I am excited about everything that has gone before.”
The 2019 game has been moved up from its traditional mid-June date to Monday, May 27th, which is Memorial Day. The change was made to accommodate the top players in both states who have early reporting dates for their new college programs.
This year’s contest will again take place at Landis Field in Lower Paxton Township in Harrisburg, with a 2 p.m. kickoff. Maryland is 2-4 since returning to the game in 2012, including a 9-6 win last year.
Here is the complete 2019 Team Maryland Big 33 Roster: