No. 3 Calvert Hall dispatches No. 2 Spalding as the Cardinals remain hot 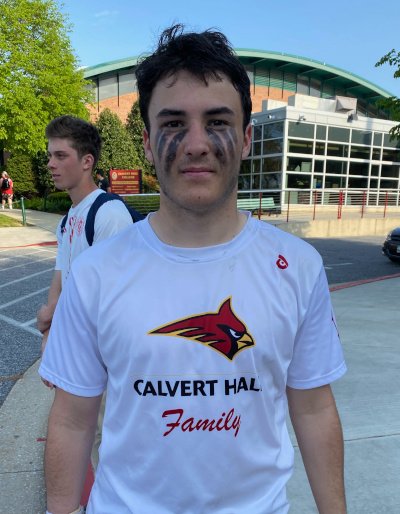 Back from a nagging wrist injury, Shuey Kelly has been a big piece of Calvert Hall’s recent surge. He scored four times and added an assist in Tuesday’s 13-8 win over No. 2 Archbishop Spalding.

The resurgent Cardinals used a potent offense, smooth transitions, and a smothering defense to race out to a 7-0 halftime lead. The defense was so dominant in the first half, the visiting Cavaliers suffered three first quarter shot clock violations and didn’t record a shot on goal until the second quarter.

Spalding rallied gamely in the second half, using back-to-back goals from senior middie Michael Weisshaar (Towson), the reigning C. Markland Kelly award winner, to cut the deficit to 9-6 with just over 10 minutes left in the game.

Third-ranked Calvert Hall called a timeout, won the ensuing face-off, and got the ball into the stick of junior attackman Shuey Kelly. The Georgetown commit, back from an early season wrist injury, sprinted across the top of the crease and unleashed a left-handed blur that tickled the twine, stemmed the tide, and got the Cards back on track.

The impact of his goal was not lost on Kelly.

“We’ve been in this situation too many times, and we’ve let up this lead, so we knew we just had to take it one play at a time,” said Kelly. “That’s a very talented Spalding team. They can come back at any time.”

Kelly was elated that he could once again contribute to his team after missing several weeks nursing that nagging wrist injury.

“It feels awesome. It feels great to be back on the field with everyone, it’s a lot of fun,” said Kelly, who has been key in helping the Cards regain their offensive swagger. “We’re clicking at the right time. I don’t think it’s because of me, I just think we’re all buying in. We’ve become more unselfish. It’s all about the team, the team, the team.”

The Cards (11-4 overall) followed up with unassisted goals from senior midfielder Jordan Wray (Georgetown) and junior middie Davis Provost (Penn) to put the game on ice and add to the momentum the Cards hope to ride into the playoffs.

Head coach Bryan Kelly was pleased with his team’s effort.

“Our kids are playing hard and they’re competing,” said Coach Kelly. “I just wanted them to go out and play with competitive greatness today.”

When asked about the importance of Shuey Kelly’s 4th quarter goal he replied, “That was huge. It was 9-6, and if they get it to 9-7… they were getting momentum. We got a great goal when we needed a goal.”

On the defensive end Calvert Hall was buoyed by an outstanding effort from senior defenseman Luke McAuliffe (Lehigh), who found himself continually matched up with the always explosive Weisshaar.

“It wasn’t exactly an assignment,” said McAuliffe. “We had some play calls where I would switch up to him and get him in the midfield. He played down in the attack a lot, so I was able to stay with him. He’s a really good player. He’s really smart with his dodges. I don’t think there’s anyone really like him who does what he does.”

“Going against a good team, if you don’t come ready to go, it’s going to be a tough uphill battle from the start,” said Phipps. “Give credit to them for being ready from the first jump, and they capitalized on their opportunities.

“We said at halftime that we were going to treat everything going forward as a playoff game. We challenged our guys and they came out and played a lot harder, played together and played as a team. We won the second half, so we’ll keep that momentum going forward.”

With identical league records of 5-3, and with two games remaining in the regular season, both squads could secure a playoff berth with one more victory. Calvert Hall entertains Severn (also 5-3) Friday night and finishes up with arch-rival Loyola Blakefield (4-5) next Tuesday.

The MIAA playoffs get underway a week from Friday, and finish up the following Friday at Navy – Marine Corp Memorial Stadium in Annapolis.