Surging at the plate, Spalding wins at Calvert Hall

Although its streak of double-digit runs scored ended at three games, No. 2 Archbishop Spalding continued to swing its bats productively, Monday, as the visiting Cavaliers toppled No. 1 Calvert Hall, 5-2, at Carlo Crispino Stadium in Towson.

While junior pitcher Tyler Blohm kept the Cardinal lineup at bay with a crafty four-hit effort, over six innings, with nine strikeouts, the Spalding bats packed most of their punch into a decisive fifth inning rally.

Trailing 2-1 entering the fifth, the Cavs (13-3, 6-3) started their rally with back-to-back walks from Ezio Rebechi and Kevin Heiss off Cardinal starter Bradley Weber. Following a sac bunt by Billy Godrick, which advanced both runners, right-fielder LaVale Hodges crushed a fly-ball to deep, straight-away centerfield, which landed on the warning track for a triple, driving in both runners to give Spalding a 3-2 lead.

According to Hodges, who also made an outstanding lounging catch to save a run in the fifth inning, he got a tip in his previous at bat as to what to look for in the fourth.

“In my last at bat he threw me a curve-ball down the middle on the first pitch and I knew that was probably going to come again in my next at bat and it was right there,” said Hodges, who jumped on that first pitch and drove it out of the reach of Calvert Hall center-fielder Mike Finn.

After Weber got the second out with a strikeout, he was hurt by a looping fly-ball to right, off the bat of Aaron Barclay, which eluded a diving attempt by freshman J.P. Murphy, for a RBI double. It was Barclay’s second double of the game, as he laced a rocket into the left-center gap in the second, and scored the first run of the game on a RBI fielder’s choice grounder by Godrick. He also scored in the fifth when Godrick laced a sharp single to right.

Despite three Calvert Hall errors, all five Spalding runs were earned. Weber struck out four and walked four in his five innings of work and suffered the loss. Matt Hentschel tossed the final two innings for the Cardinals and retired all six batters he faced.

“We’ve loosened up a little bit. Before that we were tight, everyone was tight, no one was hitting well,” said Barclay of his team’s early season offensive woes. “After that, we got the bats hot and we’re swinging well.”

“I think our guys have loosened up at the plate a little bit. We’ve had three games in a row with double digit runs and that gave our guys a lot of confidence at the plate,” said Palumbo. “The weather has been helping, obviously; it’s easier to swing the bat. I have to say it makes pitching and playing defense easier, when we’re putting runs up on the board and it’s kind of vaulted us back in the conversation.” 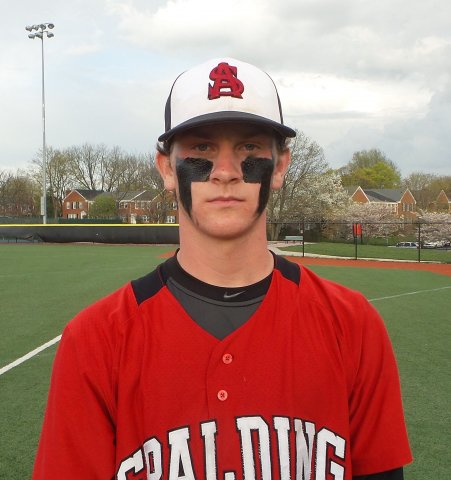 The Cavaliers, who averaged less than three-and-a-half runs per game as they got off to a 2-3 start in defense of their MIAA A Conference title, are now swinging confident bats. In their last four games, the Cavs have averaged 10-and-half runs per contest, winning all four and climbing back into the thick of the race for first place. In gaining a split of the regular season series with the Cardinals (13-6, 8-2), Spalding moved within one-and-half games of first place. The Cavs also trail second place Gilman (8-3), which was upset by McDonogh, 5-2, on Monday, by a half game.

According to Blohm, the surging offense makes it easier to pitch.

“We started off slow, but we’ve hit the ball really well lately and, of course, it gives you more confidence on the mound and helps you perform,” said Blohm, who did a masterful job of keeping the Cardinals off balance. “Today I was throwing all three pitches for strikes. The curveball, I would drop in there beautifully, and the change-up was there too. That kept the hitters off balance all game and I was able to blow the fast-ball by them.”

Blohm’s only tough patch came in the bottom of the fourth inning when he allowed a one-out double to deep left by Murphy and a line drive home run, drilled over the left-field wall by Mike Finn, with two down in the inning, to plate both Cardinal runs. In his six innings, he allowed two walks and hit one batter, to go with his nine K’s. Zach Thompson pitched a scoreless seventh to perserve the victory.

Palumbo was impressed with the way his junior lefty battled.

“He showed toughness in my opinion. They squared some balls up early, but he didn’t back down,” said Palumbo. “He still threw the ball over the plate and challenged those guys and let them put the ball in play. Our defense made some nice plays behind him.”

Murphy came into the game in the second inning after a scary collision in shallow right-field between Calvert Hall second-baseman Gabriel Nieto and outfielder Nate Bosse. Both players took several minutes to get off the turf and Bosse eventually had to leave the contest with a slight concussion and a cut on the bridge of his nose. The Cardinals were already without two of their top hitters, as Nick Delp continues to recover from a foul ball to his face, earlier this season, and slugging third-baseman Brandon Dorsey, who did not start due to a shoulder injury suffered last week. Dorsey did, however, pinch hit in the seventh and flew out to left.

Calvert Hall coach Lou Eckerl said he expected to battle Spalding all season and into the playoffs.

“We played a very good team today. They jumped up ahead of us, we came back and got ahead, and then they had a big inning,” said Eckerl. “We had opportunities and they played a little bit better than we did today.”