The junior scored two goals, including the game-winner with 1 minutes, 55 seconds left in the second overtime, lifting the top-ranked Eagles to a 9-8 decision over the No. 3 Cardinals in a MIAA A Conference lacrosse match at John W. McDonogh Stadium in Owings Mills.

Parr got a pass from Jack Simmons and ripped a low shot past Calvert Hall coach Jack McSorley, keeping the Eagles perfect (5-0) in the nation’s toughest boys’ lacrosse league. McDonogh is tied with Boys’ Latin School, an 18-8 victory over Mount St. Joseph Tuesday.

Eagles coach Andy Hilgartner was ecstatic by his team’s resilience after blowing a three-goal lead.

“I was just so impressed with our guys, every time they (Calvert Hall) pushed us we answered,” said Hilgartner. “I think that says a lot about the character of the team and it’s really encouraging moving forward, too, knowing that when we get ourselves in these tough situations – after being up 5-2 and giving up four straight goals, we answer, they go up again and we answer again – so just really proud of our guys.”

“A key theme during our huddles is just fighting back and coming back with an answer,” said Parr. “So throughout the game, we really got some quality looks through our regular offense, but the problem was they just weren’t falling. So once we started shooting a little better, our offense started running smoothly and our defense really shut it down today.”

The Eagles’ defense was resolute in critical moments against Calvert Hall, which owned possession at the start of both overtime sessions and had the ball late in regulation. Sean Lanier, who came up with five of six saves between the final period of regulation and both overtimes, got J.T. Bugliosi’s shot with 2:47 left in the second overtime.

McDonogh worked the ball around and Simmons, a sophomore midfielder, found Parr. He had enough space to get his shot past McSorley, who was brilliant Tuesday. The Boston University recruit stopped 15 shots, helping the Cardinals rally in the second half.

“We ran a couple of set looks and it didn’t work out today so at the end of the day we just wanted to run our regular motion offense,” said Hilgartner. “We dodged hard, drew a slide. Matt Woodson did a good job moving the ball and got the hockey assist, moving the ball to Simmons. We were able to finally get one past him (McSorley).”

The Eagles jumped on McSorley early, scoring twice inside the first 50 seconds and led 3-0 inside the first three minutes after Woodson scored unassisted. McSorley, headed to Boston University in the fall, found a rhythm and the Cardinals worked their way back into contention.

Trailing 5-2, The Hall scored four unanswered goals, capped by Jacob Kelly’s unassisted score to claim a 6-5 advantage with 8:42 left in the third. Calvert Hall was up 7-6 with 1:57 remaining in the frame after Green’s first tally.

The Cardinals were primed to carry and or add to the lead going into fourth after forcing a McDonogh turnover with 27 seconds left. Calvert Hall lost the ball and Parr scored with 3.7 seconds remaining in the third, tying the game at 7.

The Eagles capitalized on an extra-man opportunity as Sarro finished a Morrill pass to regain the lead, 8-7, with 9:33 left in regulation. Green answered for Calvert Hall with his second goal with 5:06 remaining.

The Cardinals had possession with 1:41 left in regulation, but Jacob Kelly’s rushed shot went wide with about five seconds left. The Towson school gained the ball to start overtime, only to turn it over on a procedure call.

“We felt we matched up pretty well, but obviously, they’re going to score goals,” said McDonogh senior longstick Arman Medghalchi. “We decided to go zone at the end and that’s really helped us.”

Meghalchi added the Eagles’ pre-MIAA A itinerary helped them Tuesday. It was McDonogh’s third overtime victory this season.

“We’ve been there before and know how to fight back,” said Meghalchi. 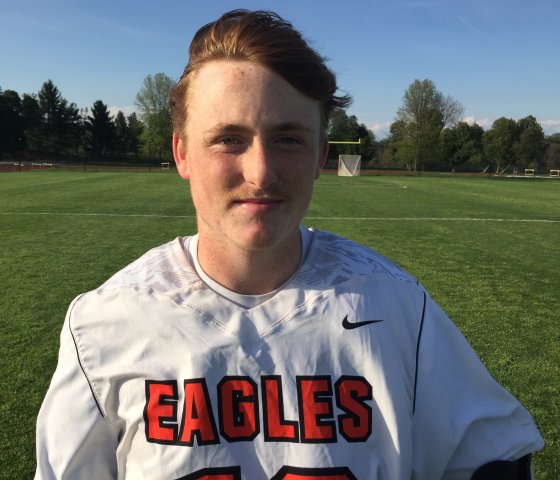 The Eagles have won eight straight decisions over Calvert Hall and are 8-0 in MIAA A regular season play, dating back to last spring. McDonogh has a MIAA A final rematch with St. Mary’s Friday evening in Annapolis before welcoming second-ranked Boys’ Latin Tuesday.

“I don’t think we’ve played a complete game, top to bottom,” said Parr, whose team is ranked No. 3 nationally by Inside Lacrosse. “But being 5-0 in this league is just huge accomplishment, but we got to look forward to the game because there’s always a tough opponent coming two days later.”

Merlo gets Gilman on the board and in the win column