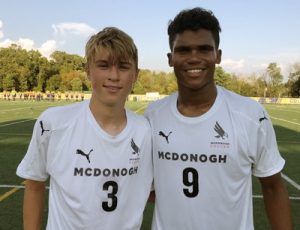 Ethan Glaser (left) and Mason Christian each scored for top-ranked McDonogh in the Eagles 3-1 win over St. Paul’s.

After 35 scoreless minutes in 90 degree heat, the Eagles (2-0 overall, 1-0 MIAA A) broke on top with a goal from Mason Christian on a nifty feed from Richie Nichols. Nichols’ long feed created a one-on-one opportunity for Christian, who re-directed a low shot inside the right post.
The underdog Crusaders (0-2, 0-1 MIAA A) answered, however, less than a minute later when Tim Knott drilled a penalty kick into the twine, after the Eagles were whistled for a foul in the box, to tie the game 1-1.
As the first half wore on, cramps began to take their toll on several McDonogh players, but Ethan Glaser persevered to provide another goal, scoring with a right-footed blast from about 25 yards, with 7 minutes, 47 seconds to go in the first half. The tally gave coach Brandon Quaranta’s squad a 2-1 lead which they would never relinquish, despite a very determined effort from the Crusaders for all 80 minutes of play.
The Eagles got an insurance goal with three minutes to go in regulation when Vince Petrera drilled a penalty kick past Crusader keeper Brian Hoskins.
Christian gave the credit for his goal to the talented Richie Nichols.
“Richie got the ball in a good spot, and he took the ball over top,” said Christian. “I was lucky to get a good bounce, and I just ran onto it and put it away. It was a classic center-forward goal.”
Glaser’s tally came on a great touch from Kyle Brown.
“Kyle got the ball in a great position,” said Glaser. “He beat his man; he slotted it through to me, a perfect ball, and I took a touch inside. I saw the keeper move to the far post, and I hit it to the near post.”
Glazer also said it wasn’t an easy game. “St. Paul’s came at us the whole game and gave us a fight.”
Hoskins, who made seven saves, had an excellent game to keep the Crusaders in the contest. His best work came when he stopped crucial penalty kick by Christian with 8:26 to go in the second half.
“That save kept us in the game,” said Crusader coach Eric Washington, who had high praise for Hoskins, and for his team in general.
“We’re creating a culture where our players are committed to winning. We’ll build from this. I’m proud of what the guys put forth on the field today.”
Washington said he will be looking for key contributions this season from Jalen Thomas, Vincent “Zill” Hill, Lawrence Aydlette and Bobby Sagis as the season progresses.
Quaranta praised Washington’s club.
“They did a great job,” said the youthful yet veteran McDonogh head coach. “They have a great coaching staff and they have great players. Hats off to St Paul’s. I think they worked really hard today. There were segments in both halves where they outplayed us.”
Quaranta said he will count on Nichols, Matt Owusu, Jacob Murrell, and Jackson Ruckman, along with Kyle Brown, Mason, Petrera and Joel Brown to help the Eagles defend their A conference crown.
Quaranta also expects a major contribution from his outstanding keeper, Connor Smith.
“It’s early and we’ll build, as we move into the season and prepare for the playoffs which are always a challenge in this conference.”
NO. 1 MCDONOGH SCHOOL 3, ST. PAUL’S SCHOOL 1
MCD 2 1 — 3
SP 1 0 — 1
GOALS: MCD-Mason Christian, Ethan Glaser, Vince Petrera; SP-Tim Knott.
ASSISTS: MCD-Richie Nichols, Kyle Brown, Joel Brown.
SAVES: McD-Connor Smith 5; SP-Brian Hoskins 7.