Mount St. Joseph ruled the wrestling world for many years, but in the late 2000s things started to turn downward. Harry Barnabae took over the reigns in 2012. At that point in time, the Gaels were no longer in the state rankings. On Saturday at Harford Community College’s APG Federal Credit Union Arena, Barnabae and the Gaels reclaimed their position in the wrestling hierarchy, capturing the state title by 38.5 points, 309.5-271, over McDonogh.

St. Joe came into the Maryland Independent Schools State Tournament as the No. 1 team in the Maryland State Wrestling Association’s latest rankings. They solidified that standing with an impressive performance that saw all 14 of their wrestlers place in the top six, and therefore, qualify for next weekend’s National Prep tournament at Lehigh University.

“For the team to come together as it did this week showed their resolve,” St. Joe coach Harry Barnabae said. “Your greatest challenge is remaining healthy at this point this season. We had several wrestlers come down with illnesses this week, yet they managed to pull it together and wrestle well. The team’s goal was to take all 14 wrestlers to the National Preps. In doing so we were confident that we could capture the State title. It didn’t come easy as the competition this year was very tough in all the weight classes. We cherish this accomplishment and look forward to next week as we compete in the National Prep tournament.”

The Gaels crowned three champions, Connor Strong (113), Shawn Orem (132), and Neil Schuster (152). Strong, a freshman, and Schuster, a senior won their first titles. Orem captured his second title when McDonogh’s Caden Mareno had to default in their finals match with an ankle injury. Orem had beaten Mareno in their previous three meetings.

“It (the second title) feels pretty good,” said Orem. “Nothing else I can say about that. (I) definitely got to give all the credit to Coach Barnabae. Especially when he got here, the team was not very good at all. I don’t think we were ranked in the state. To get us all the way back here definitely proves he’s the best coach in the state. Even before all my matches, coach just came up to me, and told me go out and wrestle, go after people, try to dominate and just wrestle.”

Schuster was also facing a McDonogh opponent, Dominic Solis, for the fourth time this year. He walked away with a 6-2 win.

“I think it’s awesome I was able to put a state championship into the Schuster family name,” Schuster continued. “It’s been 12 years of high school wrestling that we have never had a state champ, so that felt pretty good. Doing it for the team. That was big. We had the momentum rolling. We had a pretty big lead I think going into the finals. So, I just wanted to keep that going. It’s awesome (helping build the program back up). Honestly, it just gives me chills just thinking about it. Coming in, I had guys like Dan Hawkins, Zeke Salvo, to look up to. It’s just awesome that I can kinda call myself one of those guys that my current teammates will look up to.”

Strong represents part of Mt. St. Joe’s promising future. The Gaels have seven freshman or sophomores in their starting lineup. Strong, who missed the beginning of the season with a shoulder injury, edged St. Paul’s Will Guida for the state title, 4-3.

“My mindset was don’t take any opponent lightly,” said Mustipher. “I knew I could be at the top this year. I was so close last year, I just tried to remember that feeling before every match. And last year, you know, just not feeling good about losing the way I lost. I worked so hard this season so I was just prepared. I was thinking, you gotta win it by any means necessary. I took two shots, couldn’t finish either one. But I felt good with those shots so I knew if I had to go into overtime I could probably take him down. It felt good. He shot, I sprawled, you know it just shows the hard work. I scored a lot of points this weekend. I woulda liked to finish those two shots. But I feel I performed great. My conditioning is way better than it was in December so I felt great.”

Falling short in their title quests for the Eagles were, Ray Kable (126), Mareno, Quinn Devaney (145), and Solis.

St. Paul’s duplicated their feat at the MIAA tournament of having the most champions, this time the Crusaders saw five grapplers bring home state titles.

Kalishman, a senior, won his title, 7-0, over St. Joe’s Stith. It was his third win over Stith this year.

“It felt good to get another win,” Kalishman said. “I didn’t wrestle my best match and there is always plenty of room for improvement. I’m looking forward to next weekend and competing at Preps, and finishing the season strong. Thanks to everyone who helped me along the way. It felt amazing holding him down in those final seconds knowing I had the win.”

“I felt good about my performance throughout (the tournament),” Tiongson said. “I did exactly what I wanted to, and that’s to wrestle hard and enjoy the competition. It was a good last states and I’m feeling confident heading into National Preps next week.”

“I don’t really have much to say,” Bailey added. “I just went out and wrestled. It’s the best that I could hope for. Mostly through the entire tournament I was just thinking I gotta score points, I gotta get on my offense, and let things take care of themselves. Last match, I wanted to score eight points, and then I just went out and all I thought about was I’m scoring points. I’m scoring those eight points. It’s definitely sweet being senior year, having a state championship, but they’re (the two state titles) about the same. It feels good.”

Brady Daniel (220) won his third straight state crown, his second for Good Counsel. The first championship came as a sophomore for River Hill. The senior went into overtime to win this title as St. Paul’s John Urban came to battle. Daniel earned a takedown in the first overtime period to claim the victory, 7-5.

At 126lbs, DeMatha’s Nathanil White, who recently dropped down from 132, brought home his first state crown with a hard fought 5-3 win over McDonogh’s Kable.

“I’m really proud of our seniors finishing with state titles, Neil Schuster and Shawn Orem.  Shawn captured his second straight title. Neil has been focused all year on winning this tournament after finishing second last year. I know this means a lot to him. Freshman, Connor Strong also was very impressive, pinning his first three opponents before his decision over Guida in the finals at 113.

“You have to feel for Ryan Leventhal (120), and Caden Mareno from McDonogh. Both went down with ankle injuries during the matches with our wrestlers. They are tough competitors and we wish them a quick recovery.” 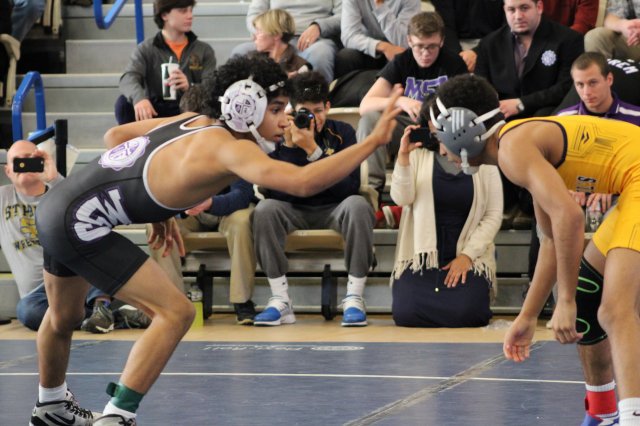 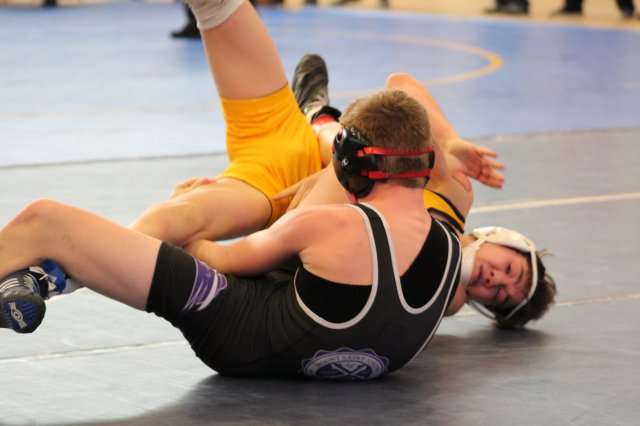 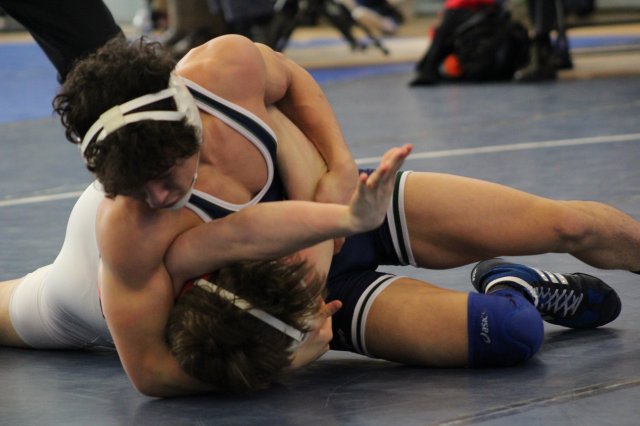 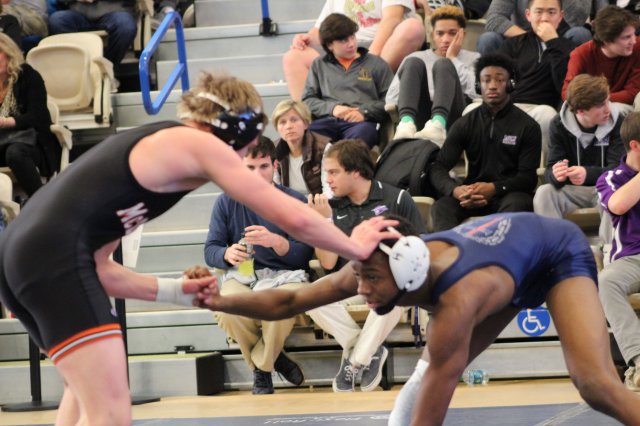 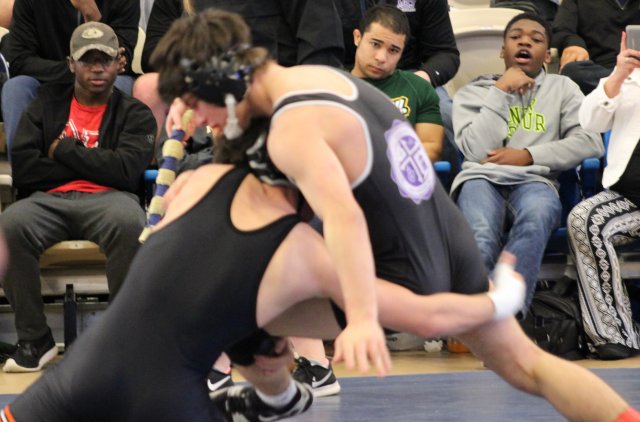 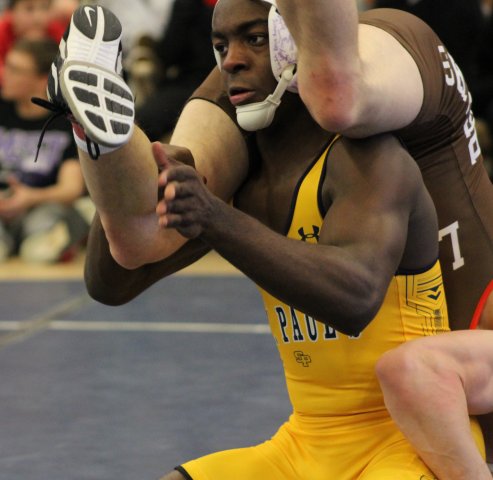 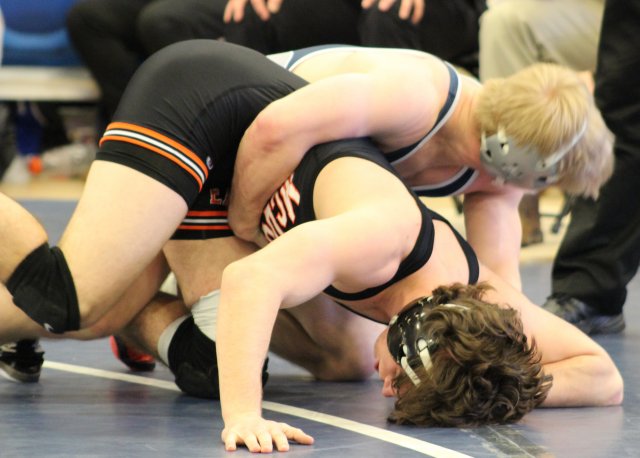 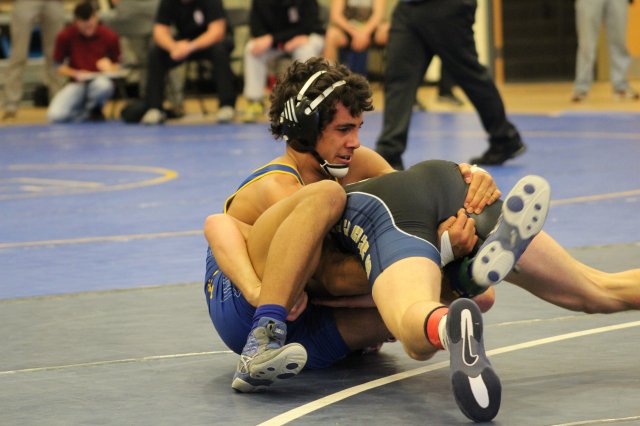 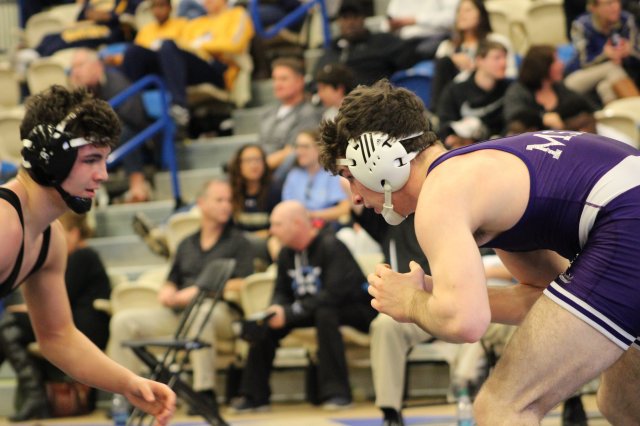 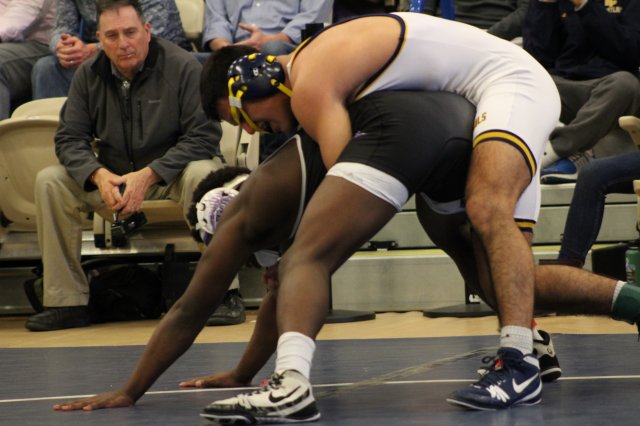 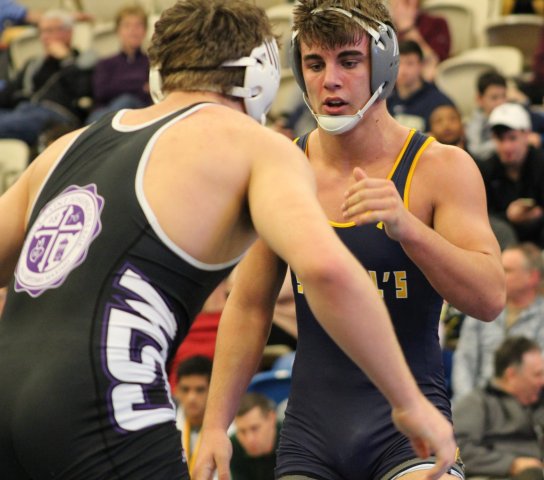 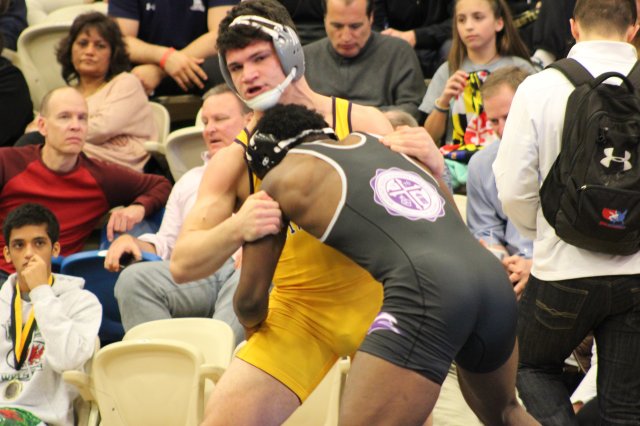 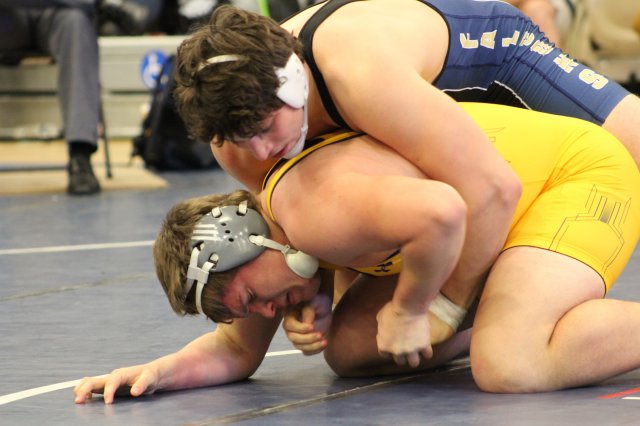 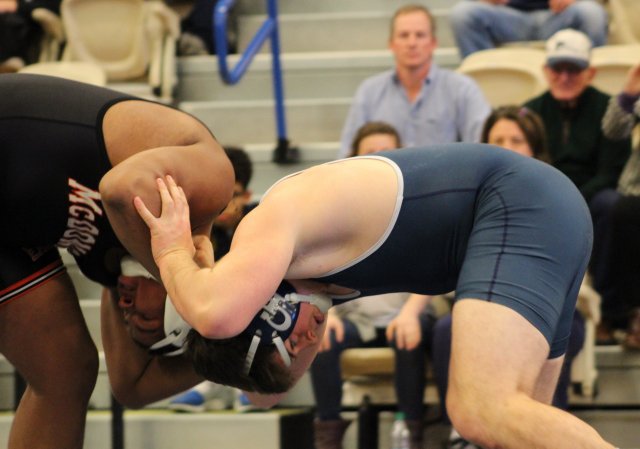 McDonogh hits its stride in a 4-0 win at Loyola