Sunday afternoon games in the Baltimore Catholic League are not as common as they once were, but on Sunday in Bel Air, top-ranked Mount St. Joseph and No. 7 John Carroll played what St. Joe coach Pat Clatchey called an “Old School Sunday Classic.”

With big performances from each of his starters and a 10-0 fourth quarter surge, Clatchey’s Gaels outlasted the host Patriots, 77-71, in an entertaining, up-tempo BCL contest played before a sold out, standing room only crowd of 1,400. It was the first meeting of the season between the rivals, who produced a classic BCL Tournament final match last year at SECU Arena.

As testament to the magnitude of the contest, not to mention the big-time talent on the floor, many high profile college coaches, including Miami’s Jim Larrananga, Virginia’s Tony Bennett and Kentucky’s John Calipari, were on hand to witness the action.

The Gaels (20-1 overall) saw an eight-point half time lead dwindle to two midway through the final quarter. St. Joe, however, showed the mettle of a battle-tested top-ranked squad, as they answered with a 10-0 run to push the lead back to 12 and regain control of the contest.

Junior Jalen Smith, one of the top uncommitted players in the class of 2018, started the surge with a put-back of his own miss. He added a monster two-handed jam later in the spurt and finished with a team-high 24 points for the Gaels.

According to Morsell, the Gaels aren’t intimidated when the pressure is on.

“In practice, we practice a lot of game situations, a lot of situations when we are down and have to come back,” said Morsell. “We’re just built for this. When we get into those situations in games, we are ready.”

Clatchey was especially impressed with the work of Robinson, not only for his offense, but for his second half defensive effort against John Carroll junior star Immanuel Quickley.

“In the second half, I thought our defense on Immanuel got a lot better. It was a great defensive effort by Jaden Robinson and Darryl, combining on him,” said Clatchey. “I thought Jaden Robinson had a great game. Against Calvert Hall the other night he went 6-for-6 from the floor and 4-for-5 from the line, today he was 5-for-5 and 4-for-5; a great effort. He has just really stepped up this year, he played terrific and I thought Jalen Smith was just tremendous.”

Quickley, the primary object of affection for many of the college coaches on hand, had a game-high 25 points. But the reigning VSN Player of  the Year was limited to just a pair of field goals in the second half as the defense tightened.

The Patriots, however, were playing without their other junior star, Montez Mathis, who missed the game with an illness. Nigel Haughton picked up some of the slack, scoring 20 points for John Carroll.

“I thought we just ran out of gas towards the end,” said first-year John Carroll coach John Zito. “We were missing two guys who are important to our rotation. Obviously, missing Montez hurts, but I loved our effort today.”

St. Joe pushed out to a 17-11 lead in the first quarter and then went on a 10-2 run to build a 14-point advantage, its biggest of the contest. Three-pointers by Haughton and Quickley, however, fueled an 8-2 spurt by the Patriots as they closed within eight at the end of one quarter.

The Patriots (13-6) got as close as five in the second quarter, but the Gaels drove the lead back to eight at the half. In the third quarter, back-to-back baskets by junior Qadir Ismail (9 points) pulled John Carroll within four, but the Gaels followed with a 9-2 run to go up by 11. John Carroll countered with its own run to get back within six at the break.

“In this league you need everybody contributing. You need guys to play their roles,” said Clatchey. “Guys made plays and smart decisions. There is a very small margin between winning and losing in this league. We have seven losses in the last two years and five of them are by one point. We talk to our guys all of the time about how important each possession is.” 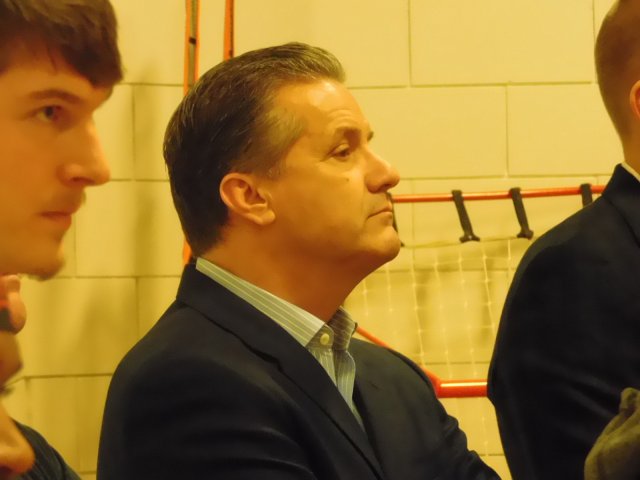 St. Joe is now 11-0 in the MIAA A Conference where it’s running away with the Black Division. John Carroll is the next closest pursuer at 5-2 in the league. The Gaels also improved to 7-1 in the BCL where they sit in second place behind St. Maria Goretti (6-0), the only team to defeat St. Joe this season. John Carroll is 4-2 in the BCL and in third place in the standings.

High drama in the MIAA

Mt. St. Joe repeats as state champs and No.1 team in the state

Settleman nets a pair as No. 3 McDonogh wins