Spalding subdues No. 10 Loyola with a flurry of big plays

Football coaches love to talk about explosive plays and for three quarters they were detonating all over Loyola the Blakefield’s Hargaden Field, Friday afternoon, as No. 2 Archbishop Spalding had its hands full with No. 10 Loyola Blakefield, in the MIAA A Conference football opener for both squads.

Once the final quarter got underway, however, only the visiting Cavaliers were able to sustain the bombardment as they turned a tenuous 28-24 lead into a 63-24 blowout, under gray and misty skies in Towson.

No one made more big plays than Spalding star quarterback Evan Fochtman, who burned the Dons with his arm and his legs, scoring on a pair of long touchdown runs and passing for four scores. He was not alone, however.

Junior Larry Brown was on the receiving end for three of Fochtman’s TD passes, including long ones of 58 and 55 yards. Junior Julius Chestnut ripped off a 63-yard touchdown run and sophomore Brevin Easton capped the scoring with a 31-yard pick six, his second interception of the contest.

According to Spalding head coach Kyle Schmitt, the big play is a focus for the Cavaliers (5-1 overall, 1-0 MIAA)

Loyola (4-1, 0-1 MIAA A), which entered the contest undefeated, went toe-to-toe with the Cavs and delivered some big plays of its own, especially junior quarterback Will Koras, who rushed for two touchdowns and threw for another.

Down 21-10 at the half, Loyola got a defensive stop on the first series of the second half and then promptly drove 77 yards in 10 plays to pull within four, 21-17, with a 2-yard touchdown run by Koras. Spalding countered with a 58-yard touchdown throw from Fochtman to Brown to go up 28-17, with 6 minutes, 1 second to play in the third quarter. Unfazed, Loyola marched right back down the field, going 80 yards in eight plays, pulling within 28-24 when Koras hit senior Jason Smith up the seam for a 36-yard touchdown pass.

When the Loyola defense followed with a three-and-out, it appeared that the Dons were on the verge of claiming command of the momentum. Seconds later, the Cavaliers changed that, for good.

It started with a 59-yard punt by Spalding’s Jake Brady, drastically flipping field position. Then Easton came up with his first interception of Koras, setting the Cavaliers up at the Loyola 16 with 17 seconds to play in the quarter. On the first play of the series, Fochtman fired a tight spiral at a slanting Brown, who made a beautiful diving grab as he crossed the goal line.

The turnaround took all of the wind out of the Dons sails and Spalding moved quickly to close it out. In the fourth, Fochtman and Brown connected for their third score and Fochtman raced 40 yards for a touchdown, before Chestnut and Easton delivered the final two scoring blows. In the final quarter, the Cavalier defense also stepped up its game, sacking Koras five times.

Loyola head coach Brant Hall, who announced earlier this week that this will be his final season on the Dons’ sideline, thought the late third quarter interception took a lot out of his team.

“I’m proud of our guys because we came out here and put forth an effort. I’m kind of a disappointed, after we threw an interception in the third quarter, how the game changed,” said Hall. “With the experience we have, we can’t have that happen. We can’t give up 30 points in a quarter. Certainly proud of our guys, glad they came out here and represented well, but we have to learn how to finish and play four quarters of football.”

Fochtman said his team was not satisfied with its first half effort.

“At halftime we were a little shocked. We thought we would be up by a little more. We were expecting to be up,” said Fochtman, who rushed for 149 yards on 15 carries and was 12-of-18 passing for 290 yards. “During halftime people really stepped it up. Our line solidified and I really think we all stepped up in the second half. We weren’t going to get beat by Loyola. We just had that mentality.”

Brown, who had 130-yards on his three catches, said he took it upon himself to make something positive happen.

“I felt I played well today,” said Brown. “We needed a spark offensively to get things going in the second half and I felt like I needed to be that person to make a play and things would follow behind it.”

In his post-game interview, Schmitt knew his club got a challenge.

“It was much closer than the score, clearly. They battled us really hard. I am really impressed with Loyola. Brant’s doing a great job,” said Schmitt. “It got away from them. We got some turnovers late and broke a couple of plays.

“I thought our kids finished well. Overall, we’re really happy with the way we finished. We coach them for four quarters, regardless. I thought our kids played really well and handled some adversity, which we haven’t seen much of, other than the Good Counsel game this year.”

Schmitt also took a moment to reflect on Hall’s decision to step down at season’s end.

“With Brant’s last year, we’re losing a great coach in the league, a guy I have tremendous respect for and I love coaching against. You hug before the game and hug after the game and we compete like hell in between.”

Hall also took a moment to address his decision. 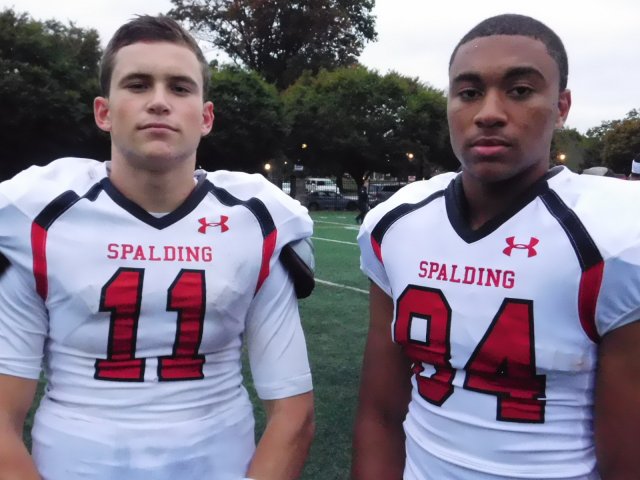 “It wasn’t an easy decision to make. As I have told everyone who has asked me the question, my number one priority is my family,” said Hall. “I have done this for 14 years and now I think it’s time for my sons, who are getting older, for me to be there. It’s certainly bitter sweet, but I’m going to enjoy it. I’m not going anywhere. I’ll be at Loyola. I’ll still be in our guys’ lives, but I’m looking forward to the new challenges.”

10 Years of Excellence: VSN’s No. 3 Pitcher of the Decade