The Cavaliers came in at 9-0, and the Hall at 4-0, and both teams sent their top pitchers to the mound.

Spalding lefty Jordan Carr went five strong innings for the Cavs, surrendering just two hits, but he ran the count to 3-2 on a lot of Hall hitters, and finally gave way to Darrien Ragins in the sixth inning after his pitch count reached 84.

Carr left with a 4-0 lead, but the Hall battled back in the bottom of the seventh inning against Ragins to tie the game. The Cardinals came within inches of winning during their spirited last-inning comeback before Spalding right-fielder Jon Lane gunned down Hall pinch-runner Mike Finn at the plate to stop the Hall short.

In the top of the eighth, a perfect suicide squeeze bunt by Spalding’s Ryan Hunt allowed Billy Godrick to score from third for what proved to be the winning run as the Cavs grabbed the victory. Andrew Kitzman,who came on in relief of Ragins in the 7th, kept the Cards off the board in the bottom of the eight to notch the win for coach Joe Palumbo.

After the Hall comeback, which was keyed by a two-run pinch single by Jack Finn, Palumbo said he told his team, “That’s why they are champions, and if we want to be a championship team, we’ve got to respond, and they did.”

Palumbo praised the performance of Carr. “Jordan Carr was outstanding. His had his fast-ball spotting up, and his cutter was important. He gave us five great innings, and gave us a chance to win.”

Palumbo was also pleased with Kitzman. “Andrew came on in a tough spot. He executed some great pitches in the last inning.”

Lane’s throw saved the day for Spalding.  The Hall had the winning run on third with one away in the bottom of the seventh when David Gately lifted a fly ball to right. Lane camped under it, and made a perfect throw to catcher Carter Sears to cut down Finn, and send the game to extra innings.

“Before the play started, you’ve got to think about what you’re going to do with the ball. That was a major league pop-up. I came in on it and threw straight through my cut-off man; a bang-bang play and in the end we got the out, and came through in the eighth,” said Lane. 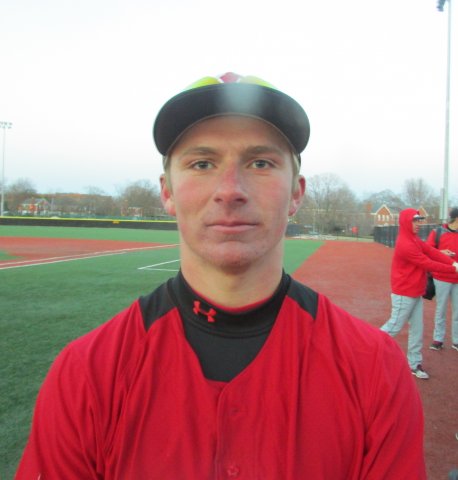 Palumbo said “Jon has a great arm; he made a great throw, and Carter (Sears) made a great play at the plate.”

Kitzman made the lead stand up in the bottom of the eighth.  “Coach Joe and I were on the same page with pitches. I established the change-up earlier that inning, and we were both expecting the call for the change-up early on in that at bat. That put extra pressure on me, to make the pitch, and I came through tonight,” said Kitzman.

Aaron Barclay led the Cavs at the plate with a double, triple and a RBI, and Paul Diven had two hits and a RBI.

Greg Carter paced the Hall at the plate with three hits, including a double and an RBI,and Brandon Dorsey had a single and a double for coach Lou Eckerl.

The Cavs took a 2-0 lead in the third when Barclay and Kevin Heiss both doubled, and they added single runs in the fifth and sixth innings to carry their 4-0 lead into the bottom of the seventh.