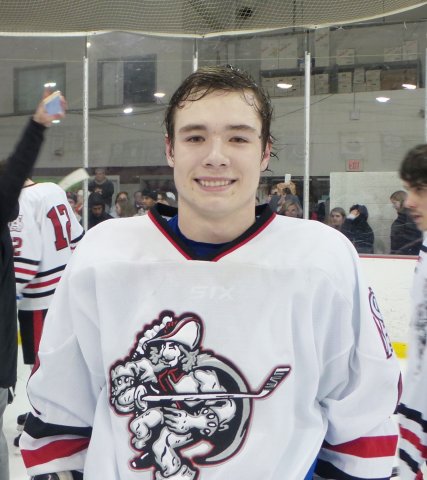 In a game that had all the drama and excitement you could wish for in a championship showdown, Archbishop Spalding rallied from a pair of two goal deficits, Friday night at Piney Orchard Ice Arena, and defeated Calvert Hall, 4-3, in the MIAA A Conference ice hockey championship game.

Senior Conor Sullivan was the hero for the Cavaliers as he scored twice, including the sudden death game-winner in overtime, and added an assist.

In overtime, the teams were reduced to just three skaters on a side and Sullivan took advantage of the open space.

“[It was] just kind of a break on the 3-on-3, so it was a 2-on-1 and I got a nice pass from a great player and I just went in, deeked him, and it was wide open,” said Sullivan of his game-winning score which came at the 2:42 mark of the overtime.

During the regular season the teams played to a 2-2 tie and Spalding won the second meeting, 3-0, just one week ago. Friday, however, Calvert Hall came out hot, scoring twice in the opening period and going to the first break with a 2-0 advantage.

The Cardinals’ extremely gifted Russian forward Ivan Yuryev scored all three Calvert Hall goals and nearly had a handful of others, as the Cavs had a tough time matching his power and speed.

Sullivan, however, got Spalding on the board at the 4:50 mark of the second period. “I was in front, got a little deflection and it went right in,” he said of his first score.

According to Sullivan that was the spark his club needed.

“We just had to get the energy flowing,” said Sullivan. “We got to get back in it and, you know, we just kept on battling. We never quit.”

With Spalding just starting a second period power play, Yuryev intercepted a pass in the defensive end and out-raced everyone up ice and buried an unassisted short-handed score to re-establish a two-goal Calvert Hall lead, at the 9:54 mark of the second period.

Spalding respond by converting the power play as Sullivan fed Jacob Hess at the 11:10 mark. Twenty-five seconds later, the Cavaliers tied the contest on an unassisted tally by Brandon Knopf.

Spalding coach Rob Trantin praised Paprcka’s performance Friday and throughout the year, stating that his sophomore net minder carried the club all season. He also said his team’s youth was a factor in their early struggles in the title game.

“We started a little slow. I thought, maybe nerves. We have a very young team. We’re working with six freshmen on our varsity team,” said Trantin. “It was a slow start for us, but I’ll tell you what, the resolve of this team is just phenomenal. They bounced right back.”

“They are a fantastic team. They do a great job and they have been fantastic for the last four years,” added Trantin. “We’ve seen them here four years in a row now. It’s become a great rivalry. They make us better; I hope we make them better at the same time.”

Three Eagles soar above 20 points in a rout of Spalding

Top of the Lake