The challenge was real and formidable, as upstart Gilman School battled top-ranked Archbishop Spalding to the end, winning one game in the MIAA A Conference baseball finals and getting the tying runs on base in the 7th inning of Wednesday’s “if” game, played at Loyola Blakefield.

The Cavaliers, however, showed their championship mettle, scoring three runs in the top of the first inning and riding the right arm of senior pitcher Zach Thompson, who tossed a gutsy complete game to lead Spalding to a 5-3 victory over the Greyhounds, clinching their third consecutive league crown. 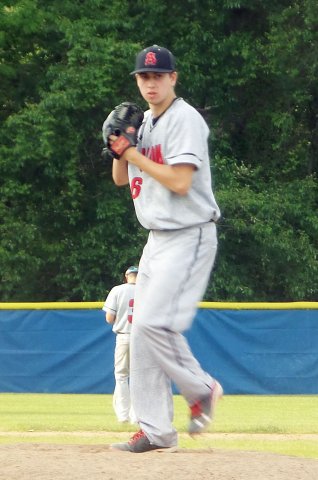 Less than 20 hours after the conclusion of an exhausting 9 inning, 6-5, loss to Gilman in the first game of the finals, Tuesday evening at Ripken Stadium, the Cavs (27-5 overall) knew they needed a fast start on Wednesday to regain the momentum. That is exactly what they got.

Spalding collected four hits in the top of the first inning, including 3 doubles to score 3 runs and the Cavaliers never trailed in the contest.

Spalding carried a 5-2 lead into the bottom of the seventh, but Gilman (18-13) put on the pressure.

Sophomore Max Costes reached on an error and pinch runner Charlie Mather moved to second on a wild pitch. Thompson struck out Drew Ehrlich, Tuesday’s Gilman star, for the fist out and got Alex Slodzinski on a groundout to third to put Spalding on the brink. Ever resilient, Gilman got a RBI single from freshman Pierce Bennett to stay alive, followed by a walk by Braxton, putting the tying runs on base.

That brought Emmanuel Engermann to the plate and the powerfully built senior put a charge into a fly-ball, launching it towards deep left-field. The large crowd ringing the Blakefield diamond held its collective breath at the crack of the bat, but centerfielder Billy Godrick easily settled under it, 15-feet in front of the fence, to seal the win and the championship.

“Getting on top early, that was big. It set the tone. Last night they beat us with some small ball, but having a 3-run lead, maybe changed their game plan a little bit,” said Spalding manager Joe Palumbo. “Zach gave us, obviously, an outstanding outing, to be able to hold that offense to 3 runs is huge. The hot start really helped with his confidence on the mound.”

In the first, senior David Harding started a big day with a one out single and scored when LaVale Hodges followed with a ringing double into the left-center gap. Barrett Smith made it three consecutive hits off Gilman starter Alex Shafer, taking a pitch the opposite way down the right-field line for a RBI double. After Shafer got the second out on a come-backer, catcher Carter Sears laced a liner into centerfield for yet another RBI double.

Gilman responded with its first run in the home half of the inning, as Isaiah Braxton led-off with a single and moved to second on a walk by Engermann. Junior Charlie Darby advanced both runners with a sac bunt and John Fitzgerald drove in Braxton with ground-out to short.

Thompson got the Hounds in order in the second, but Engermann started a 2-out rally with a single in the bottom of the third. He moved up on a wild pitch and, after Darby drew a walk, Fitzgerald came through again, driving a hard hit grounder through the middle for a RBI single.

At this point, Thompson really bore down, retiring the next 8 hitters he faced and seemed to still have something in the tank when the game ended. According to Thompson, it was all about competition.

“I was very prepared. Obviously I had complete confidence in our guys to get the job done every time we step out on the field, but I was definitely ready to pitch whenever coach put me in,” said Thompson. “Our guys are mentally tough. We bounced back hard and I knew we would. I just needed a mound and a catcher.”

In the Spalding fourth, Godrick started things with a single and scored all the way from first-base when Harding laced a wicked liner into the left field corner for a triple. Spalding’s final run came in the top of the sixth when Tyler Blohm connected for his team’s fifth extra-base hit and fourth double, before scoring on a RBI single by catcher Carter Sears.

“Coming back (from Tuesday) we knew we had another battle. Gilman was ready to play to,” said Harding. “Juicy (Thompson) came out and gave us a really good start out there. Our defense did really well. That’s all we needed was five runs.”

One of the reasons they did not need more was Harding’s glove. In the Gilman sixth, Shafer hit a hard smash up the middle that appeared destined to reach the centerfield grass. Instead, Harding captured it with a headlong dive behind second base, before flipping the ball back to the bag to start a sensational 6-4-3 double-play.

“We played hard and they were the better team today. I am so happy. The battled all year,” said Sheets. “They may not have been the best team. They might not have been the second best team, but they put it together in the second half of the season and we played extremely well. When you look at it and you play Calvert Hall, Spalding and Spalding, three games, back-to-back-to-back, that’s a tough road.”

The victory and championship mean a great deal to Palumbo, who was also beaming with pride.

“That speaks to their character, their mental toughness to be able to bounce back from a game like last night, where its back and forth but really grinding from behind the whole the game,” said Palumbo.

“It’s a special group. I’m beyond excited for them. They deserve this. They worked very hard,” added the skipper of his seniors. “The culture of this program now is what it is because of those guys and their hard work and dedication, their sacrifice and their love for one another. So, for them to go out on top and say they are part of of three championships is special. Not many people can say that on any level.”

Gilman comes from 15 down to edge St. Paul’s

10 Years of Excellence: VSN’s No. 1 Upper-Weight Wrestler of the Decade