No. 6 Severna Park left no doubt that the road to the 4A/3A crown runs through it, posting a 12-5 decision over the 17th-ranked Lions in a non-league match in Ellicott City. UMBC recruit Trevor Patschorke had four goals for the Falcons (9-0), and Josh Coffman added a hat trick and an assist.

The Falcons avenged the loss with a come-from-behind 10-9 victory over the Cavaliers from the MIAA A Conference. Last Thursday at Spalding, Severna Park bested neighborhood rival and last season’s MIAA A semifinalist Severn School at the Andy Eser Memorial Tournament.

“Those are great wins for our program, but, in the grand scheme of things, they don’t mean a lot in terms of accomplishing our goal,” said Severna Park coach David Earl, whose won its first state title since 2010 last spring. “It did help us with the goal of getting better…the message to the kids was anybody can jump up and get you, especially a team like Howard.”

The Lions, who won the 2015 title before Severna Park claimed the belt with a 9-3 decision at Stevenson University last May, struck first within the first 90 seconds Wednesday and trailed 3-2 early in the second. The Falcons amped their defensive pressure and suffocated Howard’s ability to run its offense.

“We brought our guys between the first and second quarter and talked about putting our foot on the gas and putting them away,” said Severna Park defensemen Cullen Joyce. “We have a saying, “No hope,” and we had to make that happen.”

The Falcons closed the half with four tallies, including two from Patschorke and Josh Thomas finished a pass from Coffman with 57 seconds left before halftime for a 7-2 advantage. Chase Cope ripped a shot into the top-right corner, making it 8-2 with 7 minutes, 43 seconds left in the third.

Coffman got an empty net score after Howard goalie Devin Bradley lost the ball while running the ball out. Joyce, who’s headed to Towson University in the fall, started a scoop-break and Patschorke finished, making it 10-2.

Mark Bruner stopped the run for the Lions (6-3), slipping a low shot past Falcon goalie after a Lion man-up opportunity expired. Severna Park, with longsticks Joyce, Ty Ward. Reed Schaller and Griffin Patrick, kept Howard off the board for nearly 23 minutes.

Joyce said the Falcons defensive unit aims to allow no more than five goals a match.

“If believe if we can do that and get our talented offensive guys like Josh and Chase, we know we can put away teams,” said Joyce.

“They took advantage of mistakes we made in the clearing game, turned them into quick transition goals which really put us behind the eight ball,” said Howard coach Jimmy Creighton. “I think they are fast and athletic at every position on the field, something you do not see often from a public school.” 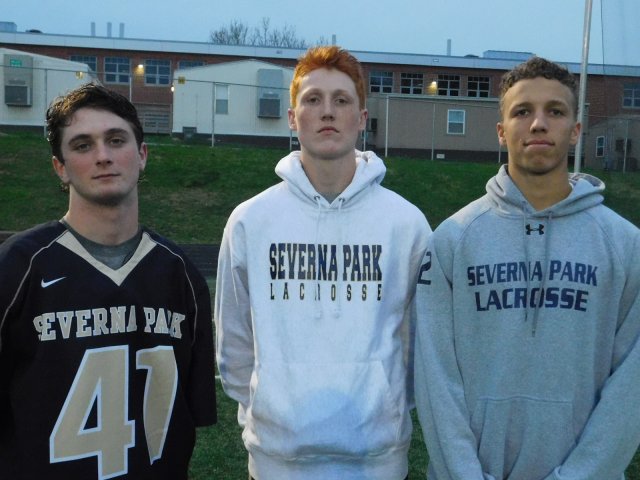 “The target is getting a lot bigger…we’re looking to get better, get one more,” said Coffman. “We know we have some pretty good wins, but we have to look forward to the harder teams and what’s coming up later in the season.”

No. 3 Mount St. Joe hangs on at Gilman

A good day at the office