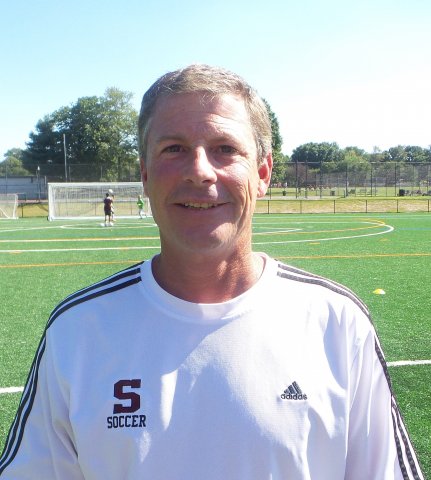 Severn and Boys’ Latin usually play tight, nail-biting soccer games, but with a chance to deliver career win number 100 for their coach, Mike McCarthy, during Homecoming on Saturday, the Severn side dominated the visiting Lakers in a 7-0 MIAA B Conference victory.

“To me, sure, it’s a momentous milestone, but more importantly it’s been about being a part of, and having the opportunity to coach and teach and an incredible school and being able help foster a successful program,” said McCarthy, who has guided the Admirals to the last two MIAA B Conference championships. “It’s truly not about the wins, it’s about the experiences of being part of something very special at Severn while being very fortunate to have been able to work with such an amazing group of kid’s year over year.”

Severn waisted little time taking control, as it built a 3-0 first half lead. Taz Taczak led the way with a hat-trick, while Henry Reed, Nate Gauthier, Phil Bartholomew and Kevin Rainey all had one goal each.

McCarthy’s son Jack pitched in with a pair of assists and Gauthier also had two helpers, while Everett Cortes, Mitch Hattar and Spencer Wright had one each.

Severn could be headed to a third straight B Conference crown as it currently leads the league with a 10-1 record (13-3 overall). Boys’ Latin (6-6, 5-5) remains in playoff contention as the Lakers are currently in sixth place.

Finish lines not crossed: Part I – MIAA B Conference

Loyola locks up a second seed for MIAA A playoffs

Reaching out and hitting someone