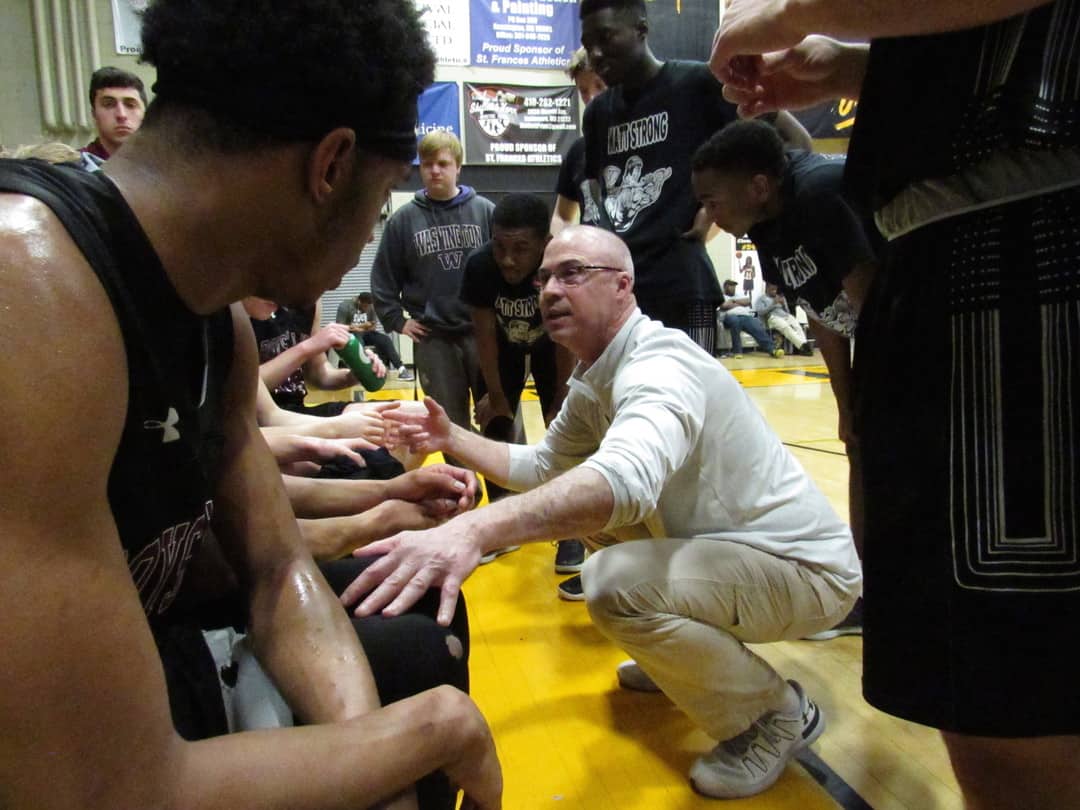 Cliff Rees wasn’t sure he was qualified when the Boys’ Latin School basketball coach position opened up a decade ago. A former star at the Naval Academy in the 1980s, Rees’ coaching experience was mainly on the youth travel level.

But Michael Thomas wasn’t necessary focused on Rees’ knowledge of X’s and O’s.

“We sought an individual who knew our school, our boys and our philosophy,” said Thomas, BL’s athletic director.

The Roland Park school confidently gave Rees the position and he didn’t disappoint. After nine seasons, Rees has stepped down as Lakers coach.

“It was incredible,” said Rees. “I was more than lucky to get the opportunity.”

Rees handed his resignation to Thomas Monday. With Boys’ Latin opting out of playing this season because of the COVID-19 pandemic, Rees felt it was time to leave the bench.

Rees, who is vice president of field services for Hughes Network Services in Germantown, said balancing work and coaching was becoming more difficult.

Rees went 173-91 at the Roland Park school, winning the MIAA B Conference championship in 2015 after losing to rival St. Paul’s School the season before in the final.

“I had a bunch of lacrosse guys and they were all athletic and competitive…the thing besides the talent of the players was the quality of the kids,” said Rees, whose 2011-12 squad finished 10-14. “They were so much fun to hang around with.”

The Lakers made the move to the A Conference in 2015. Boys’ Latin, who saw Kodye Pugh, a highly regarded Division I prospect leave the program before the new venture, won just two games in the area’s premier league (11-19 overall in 2015-16).

“Our tallest player was 6-2, but I knew we would compete,” said Rees, pointing to several promising players like Jaylin Andrews and Cam Spencer.

Boys’ Latin reached the A playoffs in 2017 (20-12; No. 11 in final VSN Top 20 poll), losing to Mount Carmel in the quarterfinals. The next season, Rees and the Lakers enjoyed one of their finest seasons.

Led by Andrews, who would become the program’s all-time leading scorer, and Spencer (both players now at Loyola University), Boys’ Latin shocked then-No. 1 St. Frances Academy in East Baltimore in the semifinals. In the final, the Lakers overcame a double-digit deficit in the second half against John Carroll to force overtime, before falling, 85-80.

Known for its nationally-ranked lacrosse program, Rees brought BL alongside Baltimore’s hardwood blue-bloods with a disciplined and hard-nosed style.

“We might not be the most athletic but if we’re the smartest and hardest working team on the floor, we’re going to have a chance,” said Rees, who had BL in the MIAA A playoffs in 2019 (lost in semifinals) and 2020 (lost in quarterfinals). “They embraced that philosophy, that mentality the entire time.”

Thomas said Rees, whose three sons played for BL, was the perfect choice to resurrect the Lakers program, who had a rich and successful history under former longtime coach Hugh Gelston.

“Coach Rees has demonstrated great leadership throughout his adult life. Knowing that he was a decorated patriot, talented basketball coach, and a great motivator made our decision to hire him an easy one,” said Thomas. “I knew that he would be demanding of his kids and that he had high aspirations for the program.”

“I always look at the passion they show for the kids and game. When you have those things, you’re going to have some success,” said Rees. “They accepted for me from day one. I couldn’t ask for better mentors and friends.”

Rees, who mentored many players during his time at BL, was thrilled to coach his sons. Matthew, a 2012 graduate was on Rees’ first team in 2011-12, followed by Casey (2013 grad) and Spencer (2016). Matthew and Casey played lacrosse at Navy, and Spencer is a senior goalie for the Midshipmen.

Rees is one of the Naval Academy’s all-time basketball players. The Mount Hebron graduate started alongside Basketball Hall of Famer David Robinson and the Midshipmen reached the NCAA Tournament three times.

Rees, who served in the Marines after graduating from the Naval Academy, said coaching his sons’ youth teams rekindled his love for basketball. He’s keeping his hand in coaching, occasionally assisting in McDonogh School girls practices.

Cliff is looking forward to spending his more time with wife Suzie and their sons. He hasn’t ruled out a return to coaching.

But that could be a hard proposition.

“There’s only one place I would want to coach and that’s Boys’ Latin,” Rees said.