As he emerged from a mob of teammates and classmates in the aftermath of Boys’ Latin School’s overtime victory over McDonogh School Friday afternoon, Jake Glatz said just one word.

After a rough first half, Glatz rebounded a big way for second-ranked Boys’ Latin. The Penn State University recruit won the faceoff to start overtime and scored seven seconds in, giving the Lakers a 10-9 win over No. 2 McDonogh at J. Duncan Smith Field.

Freshman attack Brendan Grimes finished with two goals and an assist for Boys’ Latin (10-3 overall) and Greg Ey and Basil Aburn each scored twice. Jack Parr had three goals and two assists for McDonogh (10-3, 2-2 MIAA A) and juniors Jack Sweeney and Jack Simmons each tallied twice.

In a rematch of last year’s league title game, the Lakers remained resolute after a furious fourth quarter Eagle rally to move to 4-0 in the nation’s premier boys’ lacrosse league. BL is tied for first with top-ranked Calvert Hall College.

On a perfect spring day in Roland Park, McDonogh and Boys’ Latin put together the best game of the MIAA A season to date.

“It’s awesome. How great is this day?,” said Lakers coach Brian Farrell, who was a standout defensemen in the league for BL a decade ago. “The league is so much fun to play in. When you have two great teams battling in this venue, there’s nothing better.”

“BL is incredibly well coached and I thought both teams played their butts off,” said McDonogh coach Andy Hilgartner. They played really hard on a hot day and gave everything they had. It’s a tough result to have, but I have a lot of respect for both guys on both sidelines today.”

McDonogh even it up at 9 after Simmons completed a push started with longstick checking the ball away from Chris Brandau with a strike with 1:32 left in regulation. The Eagles appeared on the cusp of thrilling victory when Catlett got his shot past Lakers goalie Chris Brandau with seven seconds left, but were whistled for being offsides and score was disallowed.

“We were all down for a bit because we thought they scored to go up with [seven] seconds left in the game and then when it was waved off [for offsides] our whole sideline was pumped up,” said Glatz.

Locked in a battle with Eagle freshman Gable Braun at the X, Glatz got the ball out from his counterpart and secured it off a bounce. He faked to pass then placed a shot in the lower right corner past McDonogh goalie Evan Long for the sudden victory.

After being out-done 7-2 in the first half, Glatz said leaned on his experience and teammates.

“Nothing against Gable, but he hasn’t been here yet,” said Glatz, who went 10 of 15 in faceoffs in the second half. “I’m more used to the big crowd and my teammates just told me, I’m a senior, it’s my last year and I had to go make it happen.”

The Lakers trailed 4-2 late in the first half, but Ey got the groundball off the faceoff and scored with 59.4 seconds left. The Lake Avenue school put up three scores in less than a minute early in the third quarter to regain the lead.

After an extra-man opportunity expired, finished a pass from Shilling with 4:02 left in the quarter. Less than a minute, Grimes nabbed a rebound out the air and stuffed the ball past Long.

“We weren’t capitalizing on some of our opportunities, but the message was keep playing loose,” said Shilling, who finished with a goal and three assists. “Play our game, don’t tighten anything up, don’t think too much, just play.”

Simmons’ unassisted strike with 33.7 seconds remaining in the third, sparked McDonogh’s comeback. In a little more than three minutes, Sweeney, Liam Powderly and Parr scored to pull the Eagles even.

“The past couple of games, the third quarter has been like Kryptonite to us, but we always want our guys to be resilient and I thought we showed incredible resiliency,” said Hilgartner. “Evan Long had a phemeonal game in goal and Gable Braun battled incredibly hard against the best faceoff guy in our league.”

Braun decisively had the upperhand, winning the first five. Glatz said his coaches to pull him to side and reminded of last year’s 8-5 title game loss to the Eagles at Homewood Field last May.

“He wasn’t having the greatest day, but he stuck with it the whole time and didn’t get in his own head and stepped up like when we needed a leader the most,” said Farrell. 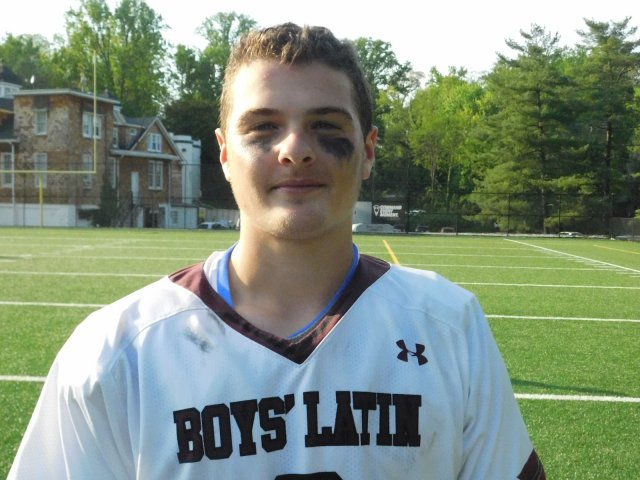 The win eases the sting of last year’s championship game for BL, which lost in double overtime to the Eagles in Owings Mills during the regular season. The Lakers squandered a four-goal fourth quarter lead.

“No one’s guaranteed a win, week in and week out,” said Glatz. “That’s the cool thing about the MIAA A.”

Gaels make it seven in a row