No. 4 Poly and 13th-ranked Woodlawn boys and Roland Park Country girls gained satisfication with victories. The fourth-ranked Reds defeated No. 3 Western, 82-70, in a front of a standing-room only crowd inside the Doves’ gym.

The Reds built an impressive 15-point halftime lead before repelling a Dove second half rally to close their week on a high note. Monday, Roland Park was routed by second-ranked McDonogh School, 72-38.

“Coach emphasized making the extra pass which was a really big,” said Johnson. “We wanted to make it where everyone can in double-digits.”

Johnson, a Long Island University-Brooklyn recruit, added 16 points and Aniyah Carpenter finished with 11. The story was McLean, whose mother Ayanna, was a key part of Western’s powerhouse teams in the late 1980s.

McLean, 5-foot-10, scored 12 points in the opening half, including an offensive rebound and basket, putting Roland Park up 31-21. A 3-pointer from Johnson followed with two free throws and a transition basket by Henson, capped a 29-9 surge that gave a Reds a 38-21 lead late in the half.

Roland Park answered with eight straight, started by Carpenter grabbing a defensive rebound and going end-to-end for a layup. The Doves clawed back to 71-67 with 2:47 remaining in regulation, but Johnson, arguably the area’s top 3-point shooter, reversed momentum with a dagger.

“In the beginning of the season Western was ranked ahead of us, so we wanted to prove something,” said Johnson. “We were excited to play and focused and I think it really showed.”

Hawkins added 11 points for Western and Makayla Pickens had 10. It was the first area loss this season for the Doves, who reached the Class 4A state final last year.

“Too many we didn’t box out and never got any 50-50 balls,” said Townsend. “We gave too many layups and we were rotating enough.” 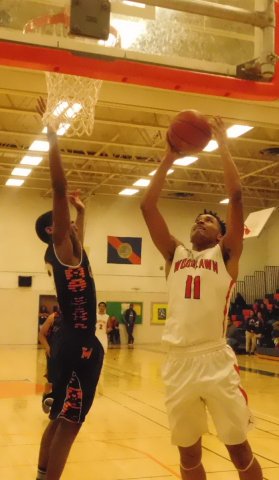 In another Top 20 match, No. 7 Seton Keough (12-10) got 13 points from senior Sydney Mitchell and Brittini Smith added 11 in a 53-39 decision over 13th-ranked Poly inside Augie Waibel Gym. Jade Porter and Cache’ Wilson each had eight points for Poly (11-5).

Jamal Lane needed a couple of days to shake off missing a game-tying shot in the final seconds against Perry Hall a couple of weeks ago. The Woodlawn senior’s basket with 1:05 left in regulation was the difference as the 13th-ranked Warriors defeated No. 8 McDonogh, 49-45, in the first of two boys’ matches.

With the game deadlocked at 45, Lane got a pass from teammate Christon Wright, drove the baseline and put the ball off the glass for the lead. Against Perry Hall, he missed a shot right under the basket as time expired.

“I knew McDonogh was a tough team and I had to step up,” said Lane. “It was a game I had to become a leader and control both ends of the court.”

Tyrique Gather, Lane and Nijelh Redd each hit two free throws in the final 29 seconds for the Baltimore County school, which opened the second half with an 8-0 run to grab its largest lead, 28-23. McDonogh rallied to tie at 35 going into the fourth and had a 45-43 advantage after Locke’s basket with 2:29 left in regulation.

The Eagles didn’t make another shot until Locke’s heave at the buzzer. Since handing then-No. 2 Dunbar its first loss, the Owings Mills school have dropped three straight.

“At the end of the day, we got to hit shots,” said McDonogh coach TJ Jordan. “We’re in a slump.”

The other boys’ match was a mismatch as Poly routed No. 11 Glenelg Country School, 60-30. Junior wing Demetrius Mims scored 20 points for the Engineers, and Temple University commit De’Vondre Perry contributed 17.

The reigning Baltimore City Division I champs smothered the MIAA A Conference program, leading by as many as 33 points in the second half. After a rough non-league stretch in December, Poly has won eight of nine, with the lone loss against nationally-ranked Simeon from Chicago.

“I didn’t expect this tonight because how talented and well-coached they’re, but I was really to see our team consistently play that kind of defense throughout the game,” said Brand. “Eventually, we got some offensive chemistry going in the second half.”

“When we start strong defensively, we can get out in transition, get open dunks, hit threes and do what we like to do, play fast,” said Mims.

Mims opened the fourth with a dunk, and finished a pass from Perry for a 55-22 advantage with 6:09 left in regulation. The Engineers never trailed after Perry’s 3-pointer, put them up 5-4 in the first quarter.

Isaiah Burnett, who had six 3-pointers Friday evening, had six points to lead Glenelg Country Saturday. After scoring 83 points with 14 3-pointers in a non-league rout of IDEA Charter (D.C.) Friday, the Dragons made just 10 baskets Saturday.

Glenelg Country coach Kevin Quinlan said it was the worst performance in his 10 years of coaching. 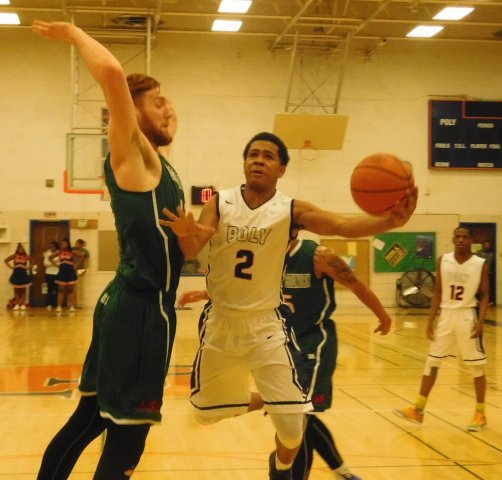 “We just didn’t make any shots. We missed a couple of bunnies early and I think we tighten up a little bit,” said Quinlan. “It’s not a moment of pride for me or the program.”

“I know they’re going to bring a lot, but I’m more worried about that group in there,” said Brand. “As long as they bring what they have, I can live with whatever the outcome is.”