There’s no “I” in Dunbar

The 2016-17 Dunbar High’s boys’ basketball team may not have the star power of teams past, but the Poets’ winning tradition remains. The No. 2 Poets defeated 16th-ranked Friends School at the 21st annual Basketball Academy at Morgan State University’s Hill Field House Saturday.

The Poets used strong defense and solid contributions from their entire lineup to move to 13-0. The east Baltimore school is one of two unbeaten teams (No. 10 Old Mill is other) remaining in the area.

It hasn’t been flashy, like the storied Dunbar teams that won three mythical national titles between 1983 and 1992, but the end result has been the same.

“Our kids are really listening, they’re buying in, they’re playing together and they all want the same thing and that’s basically to win,” said Dunbar coach Cyrus Jones, who starred on the Poets’ 1991-1992 national title squad with Keith Booth, Michael Lloyd, Donta Bright and Paul Banks (currently a Dunbar assistant). “We know who our key guys are but at the same time we have other guys that can make plays and step up as well.”

“It was a total team effort, no one person did it,” said Phillips. Phillips, 6-foot-5, is the Poets’ best and most talented player, but he’s just one of several pieces that’s fitting nicely.

Esguerra, a reserve last year, helped the Poets gain control in the first half. The 5-foot-9 junior guard accounted for the final eight points in a 10-0 run, assisting Tymu Chenery’s basket and dropping back-to-back 3-pointers, giving the Poets a 28-19 advantage late in the first half.

“We just play a simple game. Like Coach said earlier in the locker room, it’s teamwork and having confidence in each other,” said Esguerra. “When you see an open man, pass it, don’t be selfish and play defense.”

“We’re getting it from different angles and as long as we can do that it’s hard for a team to focus on one player,” said Jones.

Friends coach Al Holley said his team didn’t do a good job handling Dunbar’s pressure in the second half. Depsite the loss, Holley thinks playing Dunbar as well as several out-of-area squads have the Quakers ready for a run at the MIAA B Conference title.

“It’s about exposure and preparation,” said Holley, whose team is 4-1 in MIAA B’s Black division. “Playing schools that have similiar talent and athletic ability helps you as you move along. I think we’re prepared and that’s why we’re successful in the league so far.

My bench is a little more athletic and we have a few more kids who can play basketball. My seniors are playing like seniors, so when you have seniors playing to their potential, it helps.” 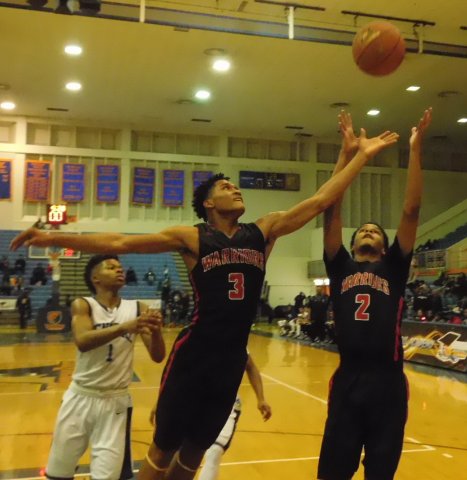 The Poets have another a match with a MIAA school as fifth-ranked McDonogh School visits Dunbar’s Bob Wade Court Monday afternoon. The Eagles are the top team in the MIAA A’s Red Division.

Comebacks were the story of the remainder of the boys’ slate Saturday. No. 3 Patterson and New Town were victorious while 12th-ranked Woodlawn fell short.

Jemauri Warren had 19 points for Woodlawn, which trailed 37-24 at halftime. The Baltimore County school got to within 57-56 on Mark Brinkley’s basket with 2 minutes, 53 seconds left in regulation.

The Falcons came back down and Amar Shivers’ 3-pointer from the corner bounce up off the iron and back through the cylinder. Woodlawn got back within two three times, but wasn’t able to complete the rally.

“No excuses, we spotted them 17. You do the math, and if you don’t that in the beginning, then it’s a closer game,” said Woodlawn coach Bobby Richardson. “This showed what we’re made of, that team [Central] is undefeated. They don’t have a lot of size, but they got guts and shooters.”

After managing just four field goals between the second and third quarters, New Town made five in the final quarter, capturing a 42-40 victory over City College. Rashad Faust’s follow-up with 12 seconds left in regulation was the difference for the Titans (5-10).

Down 15 points in the first half, Patterson stormed back to knock off Prince George’s County’s Potomac, 89-76, in the finale. Daesean Jones scored 22 points for the Clippers (12-2).

The Kane Street school took over in the fourth quarter, getting the lead at 60-58 after Darrion Pitts’ layup off a pass from Isaiah Clemons. The Clippers never trailed again after Gerard Mungo hit back-to-back jumpers for a 67-63 advantage with 5 minutes left.

Mungo and sophomore Marvin Price each finished with 20 points for Patterson, which trailed 44-29 at halftime. The Clippers lost to Prince George’s County’s Riverdale Baptist School last Friday at the Basketball Academy.

“It took us a long time to kind of wake up, I’m not sure if we really woke up, I think we wore them down with our conditioning,” said Patterson coach Harry Martin. “We kept coming at them.”

Riverdale Baptist vs. No. 6 Lake Clifton and fourth-ranked Perry Hall taking on Prince George’s County’s Largo next Saturday at Lake Clifton will complete this year’s Basketball Academy. The annual mixer took place as scheduled Jan. 12th and 13th, but the slate of games on the 14th were postponed because of weather.

Those games, except Riverdale Baptist/Lake Clifton and Perry Hall/Largo, was rescheduled to Saturday.