Paul Bernstorf is named the next Executive Director of the MIAA Long-time St. Paul’s athletic director and coach has deep roots in the conference

The Maryland Interscholastic Athletic Association (MIAA) has announced that Paul Bernstorf will become its new Executive Director, effective Aug. 1. He will succeed Lee Dove, who announced his retirement earlier this year. Dove has served in the position since June of 2013. He followed the only other Executive Director of the MIAA, Rick Diggs, who served from the Association’s inception in 1995 through the conclusion of the 2012-13 school year, when he retired.

Bernstorf, who has been on the faculty at St. Paul’s School, an MIAA member, since 1995, served as the Crusaders’ athletic director for 23 years (1997-2020). During this time he oversaw the design and construction of numerous athletic facilities on the school’s Brooklandville campus, including a $6 million field house, a $1.4 million artificial grass game and practice field, squash courts, a baseball field and stadium, and stadium seating for a multipurpose game field. 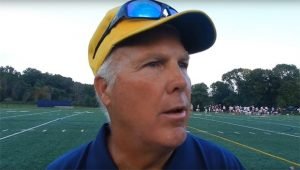 Bernstorf, of course, has a long history with the MIAA, serving as St. Paul’s liaison to the conference, in his role as athletic director, for more than two decades.

He was a member of the Executive Committee from 2002 thru 2010, serving as 2nd Vice President, 1st Vice President, President and Past President. In addition, he chaired the MIAA’s middle schools committee as well as the golf, ice hockey and squash committees at various times during his tenure.

Bernstorf is also one of the most successful head coaches in MIAA history, winning seven championships in three different sports. From 1996 thru 2009 he led the Crusaders’ baseball program and won three MIAA titles, including two in the A Conference after winning the B Conference in his first year. His 2002 club finished ranked No. 1 in Maryland and the 2003 team was ranked No. 17 on the East Coast by USA Today. His team also reached their conference finals in 1997, 2001 and 2005.

Bernstorf also led the St. Paul’s varsity football program, as head coach, from 1997 through 2014, compiling a record of 40-33-1 and winning the MIAA B Conference championship in 2012 and 2013. The 2012 team went undefeated and earned Bernstorf honors as VSN Football Co-Coach of the Year. He also was previously an assistant on the St. Paul’s football staff, contributing to championships in 1995, 1996, 2002 and 2003. Prior to coming to St. Paul’s in 1995, he also coached football at The Haverford School in Philadelphia and Columbus Academy in Ohio, where he won the Class A state title in 1987. His career record as a high school football head coach was 101-77-2.

After stepping down as Athletic Director at St. Paul’s, following the 2019-2020 school year, and returning to the classroom as a full-time teacher, he took over as the school’s varsity golf coach and led that team to MIAA A Conference championships in 2021 and 2022.

“I look forward to working with all the MIAA Athletic Directors to continue to make the MIAA one of the best high school leagues in the country and to grow our brand,” said Bernstorf. “Working with the AD’s, we will continue to provide outstanding education based athletics for all of our student-athletes.”

In high school, he was a two-sport athlete (football and baseball) and he went on to pitch in college for the baseball team at the University of Richmond.

Bernstorf’s experience within the MIAA was a major factor in his selection.

“We are pleased to have someone of Paul’s caliber to lead the MIAA,” said Calvert Hall College Principal Chuck Stembler, who chaired the search committee. “His experience, vision, and dedication to the league will be a wonderful asset to all those who work to serve the young people of the MIAA.”

The search committee also thanked Lee Dove for his service in the position over the last decade.

“We are grateful for Lee Dove’s service and leadership,” said St. Mary’s High School Principal Mindi Imes, who co-chaired the search. “He contributed to the current strength of the MIAA that facilitates healthy competition for more than 17,000 student athletes each year.”