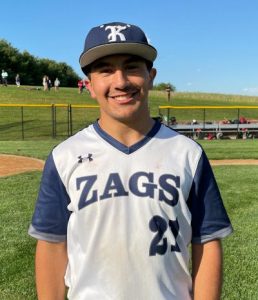 Junior Armand Ortiz pitched a three-hit complete game, struck out eight and hit a three-run home run to lead the Obezags to a 12-1 win over Concordia Prep in the MIAA C Conference baseball championship game.

Not only did the powerful right-hander toss a three-hit complete game, he whacked a three-run home run, well over the left-centerfield fence at Gerstell Academy, to cap an 11-run third inning for Key, which vaulted the Zags to a 12-1 lead over Concordia Prep. They went on to win the game, by the same 12-1 score, in five innings.

With the game tied 1-1, the Obezags sent 15 batters to the plate in third with the first nine reaching base and scoring.

Will Dowton ledoff the inning with a four-pitch walk, moved to second on a passed ball and moved to third on Jack Gallant’s bunt single. Collin McNabb and Ortiz followed with RBI singles before Sean Boomer boomed a double off the left-field fence to give Key a 5-1 lead. The next batter, Chris Williams, was hit by a pitch and that forced Concordia starter Caleb Couser from the mound.

His brother Andrew Couser took the bump next and he was greeted with a two-run double by Trey Brandon that was ripped down the left-field line. Lachlan Armstrong followed with a single and Luke Nespole loaded the bases with a bunt single, as the inning continued.

A pair of RBI groundouts pushed the Obezag lead to 9-1 and McNabb walked to put two on with two out for Ortiz who lit up a 1-1 offering that capped the scoring.

“I think it is years and years of prep,” said Ortiz of his team’s championship effort. “We’ve been waiting for this moment for a long time. All the practices, all of the hard work, we put in as team, led us here. We all came prepared. This entire week we have been, every day, trying to get in that mindset and I think we put it all together today.”

When told of his history repeating accomplishment, Ortiz responded, “I think that is pretty cool. Some things are meant to happen.

“I think all of this started last year in the playoffs. We had a very good regular season last year and in the playoffs we were complacent. We lost in the first round. We took out that regret and anger from last year and we used it. No longer was it us underestimating any teams. We came to every game ready to play at our best and we weren’t going to take it light on anyone.”

Boomer staked Key (16-2 overall) to a 1-0 lead with an RBI single in the bottom of the first after Ortiz retired the side in order in the top of the inning, striking out the first two Saints he faced.

A leadoff walk to Jacob Hofstetter in the top of second led to Concordia Prep’s only run. Hofstetter stole second and scored on a bounding single up the middle by Andrew Couser. Ortiz, who finished with eight strikeouts in the five innings, collected his third punch out to end the rally with the game tied, 1-1.

“Armand had an amazing game today, said McNabb, his catcher. “He really made my job super easy. A guy like Armand is really great. He hits his spots and makes my job really easy.”

Key coach Gary Gallant said his team, which went undefeated against league competition (14-0), took nothing for granted on Tuesday.

“Most of our guys were here last year and last year we went in as the two seed in the playoffs, and lost in the first round,” said Gallant, who completed his fourth year as the team’s head coach. “Anything can happen. We had a good roll through the season but there were games where some teams really gave us a good game and we had to survive them. You can never take any team for granted, especially Concordia Prep. They are strong and have been strong for many years.”

As far as his star player is concerned, Gallant said the Obezags have been able to rely on him all season.

“Armand is a special player. He has been doing it for us all season long. His ERA for the season is probably under one. He’s a special player that throws in the mid-80’s. He hits in the three hole for us. He hits for power; he hits for average. The kids really look up to him and he’s a great representative for the school on and off the baseball field.”

Concordia Prep head coach Peter Couser looked back on the third inning with regret but gave credit where it was due.

“Sometimes in life you wish you could have a mulligan. I wish we could have an inning back,” said Coach Couser. “The four pitch walk to start the inning hurt and we gave them extra outs, but I just have to tip my cap. Key’s a great school. Armand Ortiz, he’s a heck of a ballplayer and he’s a heck of a kid. They are well coached, they didn’t make mistakes and we did.”

Despite the lopsided score, Couser said his team never gave up.

“I appreciate my guys. They battled. They gave good at bats, even in the last inning when we were trying to claw to extend the game, but I told the kids, it does not take away from our season. To come back and be in this championship game for a third straight year is huge. And, to win two out of three, it will make us hungry for those guys who will be back next year.”