When Garrison Forest School determined it would not field a varsity softball team in 2017, it’s remaining players were left without a team. In an amazing gesture of sportsmanship, however, two of those student-athletes were given a new softball home, of sorts, with honorary positions with a rival program.

McDonogh School, which neighbors Garrison Forest in Owings Mills and competes against the Eagles in other sports as rivals in the Interscholastic Athletic Association of Maryland (IAAM), opened its arms to Garrison players Madison Wilson and Kayla Boswell.

Boswell was a team captain with the Grizzlies and a three-year varsity player, as a pitcher, catcher and first-baseman. A standout in club ball with the North Carroll Hot Shots, she is also the daughter of former Seton Keough softball and basketball coach Jackie Boswell, who now coaches the women’s basketball program at Stevenson University. 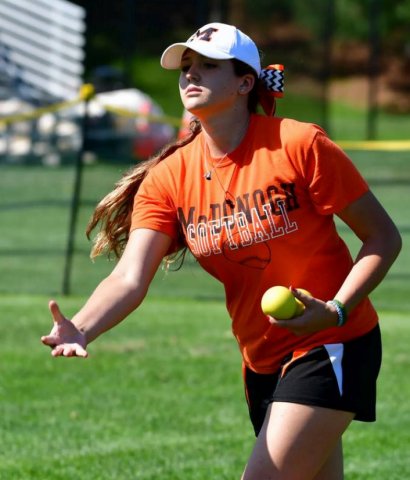 Wilson amassed more than 320 strikeouts as a pitcher at Garrison Forest, in just two seasons, and was on pace to have more than 100 career hits. She currently plays club ball for the New Jersey Intensity KOD 16U.

“I was really upset when we found out we weren’t going to have a team at Garrison because it was my senior year and I was really looking forward to seeing how successful we could be this year,” said Boswell. “Neither of us wanted to just give up though because we do love the game of softball.”

According to Wilson, the girls did everything in their power to round up enough players to field a team at Garison Forest.

“Kayla and I knew at the end of last year that it was going to be hard for us to field a team,” said Wilson. “This was because of the fact that we had seven seniors out of 12 players (the previous year). We knew that not many freshmen were going to be coming to play since at that time they had not had a middle school team in two years so it could not feed the high school program. We tried to gather up as many people as possible begging anyone to come play but no one was interested.”

Once word spread around school that there may not be a team, any girls who were considering softball decided to cast their lots with other sports. Wilson then suggested that the pair attempt to play for McDonogh, but under IAAM rules student-athletes must attend a school to play for one of its athletic teams. A petition to the IAAM was prepared and placed online, but when that was not successful Wilson and Boswell did accept an invitation to join the team in an honorary capacity.

“I am very passionate about softball because it is my home away from home. When I found out that there was not going to a team, I was determined to find any way I could for Kayla and I to play.

“The night I was told that we weren’t going to have a softball team, I was driving to Georgia to participate in a camp I found out around six that night. I looked up the IAAM rules to see if there was any way Kayla and I could play at another school and there was not. That day I typed up a petition from 6 pm to 11:30 pm only taking one break to eat. My goal was, and is, to persuade the IAAM to allow Kayla and I to play with another school.”

The pair attended every McDonogh practice and every game, showing up early and often times staying late. They participated in drills during practice and during games Wilson kept the official scorebook and Boswell tracked pitch counts and the pitches called by the coaches.  They also helped with pregame warmups on game day, including assisting with warming up pitchers.

“When Maddie and I first arrived at McDonogh, we felt completely accepted from Day 1,” said Boswell. “Everyone was so nice and I think we easily fit in with the team. We went to their team party, the team group chat, and I was even honored on Senior Day, which was so amazing. We made so many new friends on that team and I think I can speak for both of us that they created another home for us there.”

“I have never felt so much apart of a team than the one at McDonogh,” she said. “The first day we went to McDonogh the girls took us right in, introducing themselves and putting us right into practice. Kayla and I loved going to practice everyday no matter what was going on, it was our way of de-stressing and a place we could go and have fun. 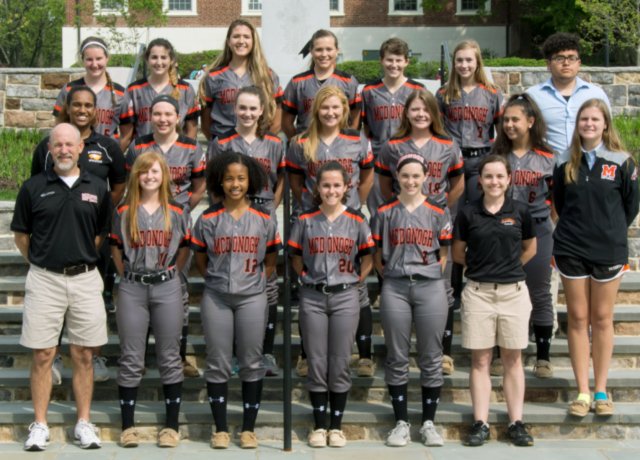 “If it wasn’t for McDonogh we would have never became as close as we have gotten over the past couple months. Kayla and I had already felt like we were one of the players but just not able to go on the field for a game. We truly knew we were apart of the team when their team picture for the yearbook was needed to be taken. Any other school would have not put us in the picture, but the girls insisted that we should be in it and in a uniform. That day Kayla and I were in a uniform feeling like we were one of the players. It might seem like just a small thing but it meant so much more to Kayla and I that we had found a softball home.”

McDonogh coach John Folfas was made aware of Wilson and Boswell by McDonogh athletic director Mickey Deegan, who wanted to explore the possibility of the girls practicing with his team to soften the blow of having their own program cut just prior to the season.

“The coaches and I told our team about what had happened at Garrison to Kayla and Madison,” said Folfas. “We explained to our team that they needed to put themselves in their position.  How would they feel, if the sport that they love, was suddenly cut from the school? We also asked our McDonogh girls how they would feel if another school, did or didn’t, give them this type of opportunity.  The team agreed that accepting Kayla and Madison, with open arms, was the right thing to do.”

Other than McDonogh catcher Maddison Gemmill, who had played some club ball with Wilson, none of the McDonogh players knew the Garrison girls, yet they became instant teammates.

“This experience definitely taught me about making the most out of a less than ideal situation,” said Boswell. “We didn’t have a team at our school but instead we found a team that accepted us. We weren’t able to play but I definitely learned almost a new aspect of the game just from observing and from doing the stats.

“I am going to Bridgewater College next year and playing softball there and I am super excited to see where the next chapter of my softball career will take me. I wouldn’t trade my experience at McDonogh for anything. I appreciate my new teammates and coaches for what they have done for me and Maddie for being with me every step of the way.”

According to Gemmill, the Garrison girls made an impression with their love of the game, making it easy for them to be accepted by the Eagles.

“In the beginning of the season, the team was skeptical of the Garrison girls playing with us, but considering the conditions, we accepted them with open arms,” said Gemmill. “After driving and attending every single practice, Maddie and Kayla have shown their true love for the sport. After playing for the Garrison softball team for three years, Kayla was unable to play a single game her senior year. This made this process even more upsetting for everyone involved. Yet, she attended every practice. This shows true heart and love for the sport and it is unbearable to see such kind, supportive teammates have to go through this.”

“These girls have worked hard to keep their dream alive,” added Folfas. “Although we are athletic rivals, we can be unified for the love of softball.  I’m sorry that these girls didn’t have a chance to play in a game due to the IAAM rules, because Kayla and Madison well deserved to play.”

AACS picks up its fifth win

Ubriaco is the choice at Blakefield