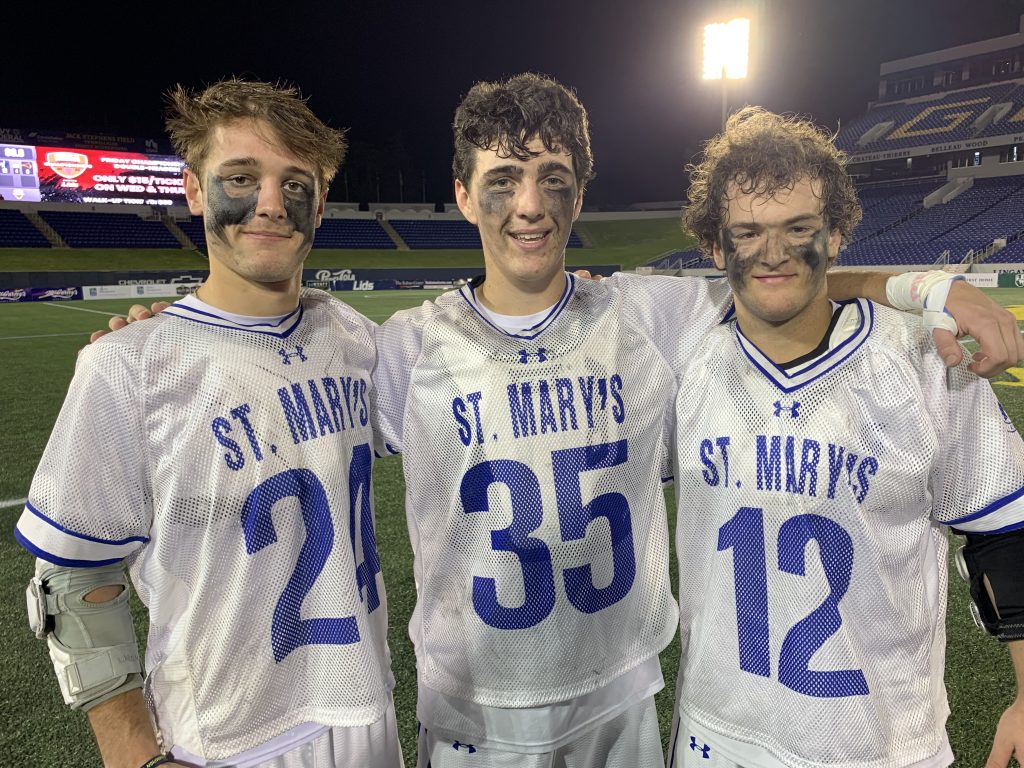 Behind four goals from junior attackman Jake Adams, a swarming defense, and an outstanding performance from senior goalie Zack Overend, No. 3 St. Mary’s stopped surging and top-ranked Calvert Hall College for a 12-9 victory in a MIAA A Conference semifinal Tuesday evening at US Navy-Marine Corps Memorial Stadium in Annapolis.

The second-seeded Saints (16-2), who lost two of their final three regular season matches, advance to the championship game Friday night against McDonogh. The fifth-seeded ended No. 2-ranked Boys’ Latin School’s reign as MIAA A champs with a 11-10 victory in the final second.

With the game tied at 3-3 halfway through the second quarter, Adams completed his first-half hat trick, and junior attack Nick Golinipounded home his first of two goals, helping the Saints to a 5-4 halftime lead. St. Mary’s offense kept clicking in the second half, and the defense clamped down hard causing numerous Cardinal turnovers, leading to a 8-6 advantage after three.

Calvert Hall (14-5) used an extra-man goal from senior middie EJ Vasile to cut the lead to 11-9 with 2:26 remaining giving the Cardinals hope, but Adams deposited his 4th goal off a 10-man ride to seal the deal with 1:24 left.

The Saints last won the crown in thee nation’s toughest lacrosse league in 2015. The Annapolis school held the area’s No. 1 ranking for several weeks before back-to-back losses to BL and Archbishop Spalding late in the regular season.

“We took three days off,” said Lilly, whose followed a bye with a victory over rival Severn School in the regular season finale last Tuesday. “We went golfing, some of us went to the beach. We needed to relax. We play much better when we’re relaxed.”

Adams credited his teammates’ unselfishness as the key Tuesday against Calvert Hall.

“All week in practice we’ve been working on ball movement,” Adams said. “Move it, spin it, and play St. Mary’s lacrosse.”

The Saints’ defense, led by a solid effort from goalie Overend, made Calvert Hall work for opportunities Tuesday.

Overend, who will play for High Point University next spring, stopped 11 shots.

“Defense gave me good looks,” said Overend, who credited defening iley Reese, George Acton, Dillon Torggler, Sam Palmisano, Brogan Stofa and Wyatt Cotton.”Being a goalie is all about your mindset. I couldn’t be nervous, I had come out and defensively do what we needed to do.”

Calvert Hall, looking to get the MIAA A final for the first time since the conclusion of its historic 3-peat (2017-2019), got two goals from Truitt Sunderland, Steele, Wray each scored twice.

“We rushed a little bit. I got to do a better job,” said Kelly. “I thought we played better in the second half. They had good opporunities and they executed. Their EMO was way better than ours and that was the difference in a lot of ways.”

Kelly was proud of how the Cardinals responded in the final weeks after a stunning loss to John Carroll School.

“I’m really proud of the kids. They taught me a lot,” said Kelly, the dean of MIAA A coaches in his 27th season. “We had a lot of kids injured, a lot of kids playing for each other. There’s no greater love than a man who laid his life for his friends. I thought our kids laid down their lives for each other, and they competed.”

When asked about the huge throng of supporters who made short trip from its downtown Annapolis campus to Navy’s stadium, Lilly said playing at its home field, Pascal Field, would’ve been better.

The Saints’ faithful stormed the field to celebrate Tuesday’s victory.

St. Mary’s, which lost to McDonogh School during the regular season, know it will need another high quality effort to hoist the elusive MIAA A championship plaque.

“It’s a phenomenal feeling, but at the end of the day it doesn’t mean squat because the game that really counts is [Friday],” Lilly said.