Oakland Mills ended competition on Friday night at the 30th Annual SnOverlea Wrestling Invitational, hosted by Overlea High School, nursing a four-point lead over Loyola Blakefield (No. 15 in the state per the Maryland State Wrestling Association). Heading into the final round of wrestling on Saturday, Loyola had trimmed that lead to two, 233.5-231.5. Both teams had six grapplers in the finals, including three head-to-head matchups. The unranked Scorpions, however, won two of those and saw five guys reach the top of the podium, while the Dons were only able to capture three championships. That made the difference, as the Scorpions won the title by 6.5 points, 265-258.5.

“One thing we wanted was composure,” Oakland Mills Coach Brad Howell said. “We wrestle every day in the room. We don’t wrestle all fired up. It’s about skill and technique. You can’t implement it when you’re out of your mind. You gotta be focused and composed. Even our warmups were all about our learning cards, and we had some drill cards the kids were working on. We wanted to see that implemented.

“I reminded them about a character trait we were focused on in phase three of the season, which is competitive. We wanted to teach them about being very competitive. So, it’s about doing what you do best and taking the fight to the guy. I thought we went out there and implemented what we needed to do. I was real proud of the boys throughout the tournament.”

Howell was especially proud of the effort in the finals.

“Our finals were excellent. We won five out of six in the finals. (It was a) good solid performance. Kyle going out there and teching that tough kid (Loyola’s Josh Aybar). We wrestled them for nothing a week ago, so I was real happy, he was scoring with all kinds of stuff. Rynn pinning his way through the tournament, Daiquan coming down wrestling Strand, looked pretty dominant in that performance. Goldfein’s been on a march. He’s been beating some real quality kids lately and continues to show us that he can compete with some of the best.”

The first of those head-to-head meetings with Loyola came at 106, and featured two wrestlers ranked by the MSWA, Oakland Mill’s No. 3 Daiquan Anderson and No. 12 Shawn Strand. Anderson, who was a 1A/2A state runner-up last year, controlled the match from the opening whistle, eventually downing Loyola’s private school state-placer, 10-4.

“(I wanted to) stay low,” Anderson said. “Don’t let him attack me and work my game. I did good. I believe I could do better, but it is what it is. Yes sir (the second title is better than the first). I’m debating if I’m going to be 13 or 106 for the rest of the year. I was strong, but losing that weight, I wasn’t too strong.”

Loyola and Oakland Mills met in a dual meet last week, and No. 4 Kyle Farace defeated the Dons’ Aybar, 4-0. Farace, a two-time 1A/2A state runner-up for the Scorpions, poured it on in this meeting, piling up the points en route to a 16-1 technical fall, and with it, the 132lb championship. The tournament title was the first in Farace’s high school career.

“In previous finals matches I didn’t mentally prepare well, but for this one I definitely feel like I was a lot more mentally prepared,” Farace added. “I wasn’t really focused on what he was doing. I was just focused on what I’m doing and how I’m going to implement my game. And just take my game, and as coach says, ‘Stuff it down his throat.’ It definitely feels good to get that monkey off my back. It’s always a bummer coming in second. I finally got first so it feels a lot better than second.”

John Rynn (145) made quick work of his finals opponent, Jaime Rice (Boys’ Latin). The two-time state placer picked up a 44 second fall to go with two pins in the earlier rounds to earn the tournament’s Outstanding Lightweight Award.

“(I wanted) to just keep pushing, never stop wrestling hard,” said Rynn. “I knew I just wanted to get done with it real quick. He was giving me the snap. I was just snapping him down, just to see if he would budge, and then he went down, so I just took the snap and went behind him. I was just working my game really. It was something new. I don’t usually do that snapdown to take him down, but I knew when I got him down I could turn him real quick. It’s my first time (winning Outstanding Wrestler) so it feels real good.”

Oakland Mills’ other champions were, Ben Goldfein (138) and Paul Johnson (182). Goldfein, who is listed in the “others to watch” section of the MSWA rankings, downed Western Tech’s Mohammed Sow, 9-5, in the finals. Sow upset No. 17 Zack Kauffman (Fallston), 3-2 in the ultimate tie-breaker period, of their semifinal match.

Johnson, unranked by the MSWA, pulled an upset in the finals of No. 16 Mervyn Crawford (Poly). The back-and-forth affair was one of the most exciting bouts of the finals. Johnson outlasted Crawford to the tune of a 14-11 score.
Anthony Morales (160) was second for the Scorpions. Khalyl Abdul-Malik (220) was third. Kyle Boothe (285) landed in the fourth spot. Taking fifth was Aaron Smith (195). Jalen Cornelius (113) and James Pender (152) placed sixth.

Loyola’s Taylor Randolph (160), a transfer from Sparrows Point, won the third finals meeting with Oakland Mills. Randolph (No. 22) and beat Morales (others to watch), 10-4, to secure his first tournament title with his new team. 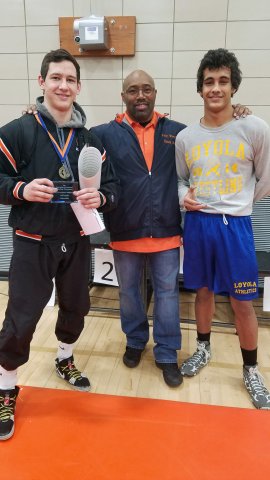 “About a week ago, I wrestled him, and he stayed away from me the whole match, so I only beat him by one,” Randolph continued. “But today he came out, he was shooting. I like it when people do that because it gives me more options. I just wrestled the way I know how to, and used his moves against him. I had a couple of little mistakes here and there, and he capitalized on them, but I was able to get out and get my head back in the game. It’s a good time. It’s the first tournament I’ve actually finished this year, and I’ve never wrestled here before. It’s the first year in a new school. It’s just a cool experience to win it with this team.”

The Dons’ other champions were, No. 18 Ryan Thomas (120) and No.4 Dominick Reyes (152). Reyes, two-time state-placer, pinned Lansdowne’s Raoul Meva 12 seconds into the second period. Reyes missed the state tournament last year after an injury at the MIAA tournament. The senior is wrestling with a vengeance this year. He pinned his way to the finals and the Outstanding Heavyweight Award.

“(I) mainly just (wanted to) wrestle hard,” Reyes said. “Loyola was behind, I think, five and a half points when I was on the mat. So, my main objective was to eventually pin the guy. But before that, I wanted to work my shots. I just wanted to wrestle my best. We have Curley and St. Paul’s coming up soon; Tuesday matter of fact. So, I just wanted to have a few good live matches in before we get into the real competition. (I’m) extremely grateful for any award I win, so first place here, no matter if it’s here or Mount Mat Madness, I appreciate just the ride. It’s my last year so I definitely appreciate the Outstanding Wrestler award too.”

Coming up short in the finals for Loyola were, Strand, Aybar, and Jason Litvak (170).

Western Tech had three wrestlers bring home gold, No. 17 Ike Kalu (170), No. 11 Noah Johnson (195), and No. 4 Chukwudi Kalu (285). Johnson and Chukwudi Kalu are returning state placers for the Wolverines. Ike Kalu battled Loyola’s No. 20 Litvak in the final round, walking away with a hard fought 5-4 win.

“Well, (I thought) he wasn’t the biggest wrestler so I’m gonna have to physical him out,” Ike Kalu remarked. “But for the first minute, he was stronger than me, and even bloodied my nose for a little bit. So, I was a little shook. After I got my nerves right, I got a takedown. After that my mindset was alright, (I was like) bet, he’s not no games, he’s serious. The last minute I was down by two, and my coach was like, ‘big move, big move.’ So, I did what I’ve always done throughout the season, double-unders, and when I got it, I did the trip. My top game is not that good, and I had to hold him down for about 30 seconds, but I dug deep. I got the win. That’s all that matters.”

Poly’s Terrell Mills (No. 9 at 113) faced Lansdowne’s Gorsha Reitterer (others to watch) in a finals match. Despite being sick before the match, Mills was still able to go home with a gold medal, tallying an 8-4 decision over Reitterer.

“I was (sick all day),” Mills said. “Since I lost last week, I was telling myself, I can’t come in second place two weeks in a row. I gotta push it out and still win. And that was all I was thinking, So, I had to just fight through it, because sometimes in life when you’re facing challenges you just gotta persevere. I feel as though I did pretty well. Right now I’m just trying to get prepared for states.”

Fallston’s Donavyn Hohman (No. 23) won the 126lb title with a pin over Darrius Thomas (Milford Mill) at the 2:14 mark of the second period. No. 18 Gerrard Nutter (New Town) survived a tough match with Thomas Weedon (Lansdowne) at 220lbs. Nutter edged Weedon, 9-8, to secure the crown.