Not much of a challenge 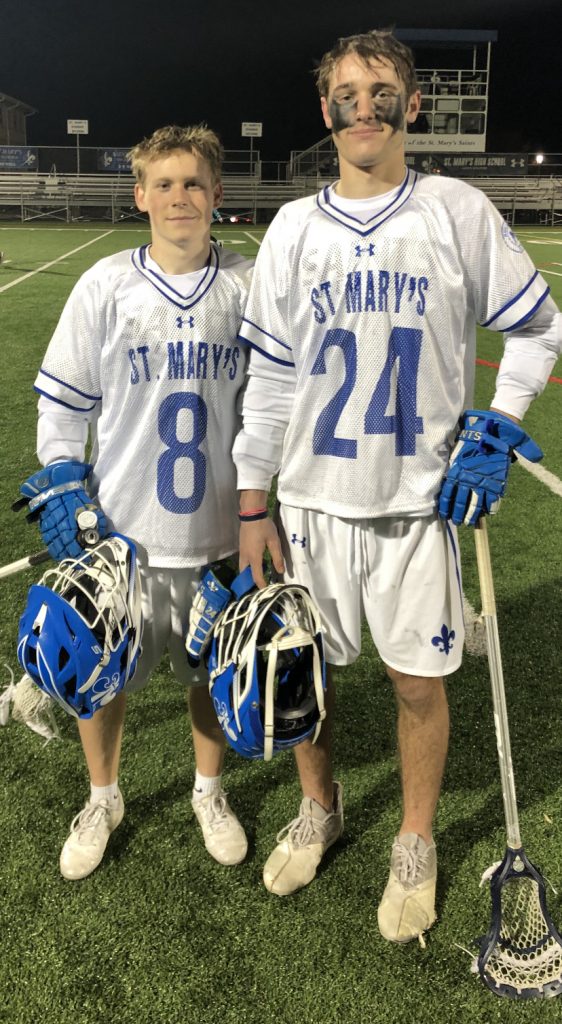 The Saints handed 10th-ranked Broadneck its first loss in a 16-4 decision, while the No. 8 Admirals ended Severna Park’s 29-game winning streak with a 13-8 victory in the opening match.

Severn blew open a close match in the third quarter as Lawrence Dring, Chase Hallam, Tanner Huber, and Luke Hayes each produced a pair of goals for the Admirals.

Hayes accounted for his two tallies in a four-goal run, turning a 9-6 lead late in the third into 13-6 with nine minutes, one second left in regulation. Andrew Beard added a goal and two assists for the Admirals (8-2 overall).

Enrique Villagomez’s five goals paced Severna Park (6-1), who’ve won the past five straight Class 4A state titles, and is the favorite to win the 3A crown next month at Loyola University. Kevin Bredeck, Ganon Cope and James Ruppert also tallied.

The Falcons’ last defeat was in 2019 to Archbishop Spalding in the Public/Private event. Severna Park rebounded with a victory over Severn and didn’t lose again, winning its fourth straight 4A state title.

Broadneck, poised to replace Severna Park as 4A champs, got a stern lesson from nationally-ranked St. Mary’s, which ran off six unanswered goals for a 10-2 halftime advantage.

Nick Golini erupted for a game-high seven goals for the undefeated Saints (9-0), which included a few near misses off the crossbar, to go along with an assist while Will Hopkins found the back of the net five times.

“Teddy Androus, he’s working really hard with Justin Webber at the X getting us the ball and when we get it, we’re nice and calm and composed,” Golini said. “We work hard, and we want it really bad. I’m just excited.”

While the Saints were lethal around the goal offensively, perhaps one of the biggest differences in the contest was St. Mary’s ability to swarm the Broadneck defenders in their attempt to work the ball to their attackers. The Saints’ attackers-turned-defenders forced the Bruins into numerous errant passes, or stripped possession of the ball, leading to transition opportunities for St. Mary’s and far fewer offensive chances for Broadneck, which was outshot, 47-20, for the match.

“We just had a tenacious attitude,” Hopkins said. “We would ride the ball back. Sometimes, it didn’t work and sometimes, we came up with the big one, and we got goals off it. I just think we did a lot of things really well, and the attack went after them pretty hard.”

Golini struck for a pair of goals in the first 3 ½ minutes of the match, and Hopkins added a third goal with 7:27 left in the first period for an early 3-0. The Bruins, following a timeout, answered with a pair of goals of their own from Jackson Shaw and Ryan Salazar to quickly trim that deficit that then grew to 4-2 by quarter’s end on a nifty wraparound shot from Hopkins off a feed from Golini.

St. Mary’s, ranked 17th nationally by Inside Lacrosse, took over the contest in the second period, exploding for six unanswered goals for a dominant eight-goal halftime advantage. Golini struck for a trio of goals in the quarter while Hopkins chipped in two and Jake Adams had one as the buzzer sounded. Adams scooped up a loose ball just outside the crease and fired clean as the second quarter came to a close.

“We pretty much mapped this game quarter by quarter and that big second quarter and then obviously some follies in the fourth when we’re trying to get back into playing how we went to play, right?” Bruins coach Jeff McGuire said. “It’s just catching and throwing on the clears for us and tough ground balls. When you’re playing 80 percent defense, you’re going to get run by here and there. They’re a talented team. Our guys played their hearts out, so we need a test like this now to get ready for matches.”

St. Mary’s ran its lead to 13-2 in the third quarter on a pair of transition goals by Adams and Hopkins and one from Golini in the set offense before Davis Fisher produced the first of his two goals to stem the tide for the Bruins (6-1).

Golini, Dom Rafter, and Casey Smith capped the scoring for the Saints in the fourth quarter; Fisher tossed in his second goal for the Bruins with 5:34 remaining in the contest.

The annual challenge, last played in 2019, continues Wednesday at Broadneck’s Lawrence E. Knight Stadium with the Bruins matching up with Severn, and Severna Park taking on St. Mary’s.