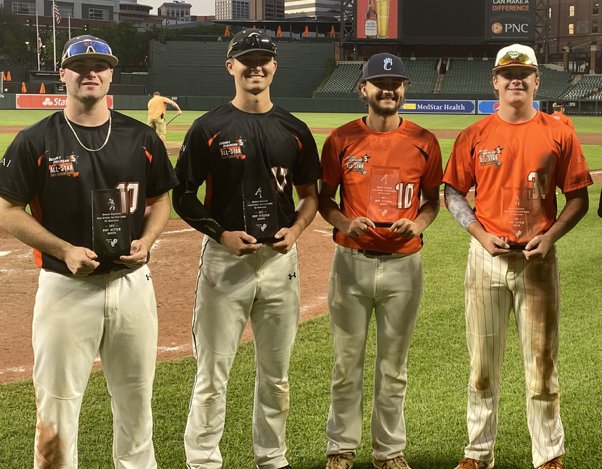 Good Counsel’s Liam Houghton (left) and Matt Archibald of John Carroll was the top hitter and pitcher, respectively, for the North All-Stars while Chesapeake-Anne Arundel’s Nick Karls and Reservoir’s Ben Davis were the South’s top players in the Brooks Robinson High School All-Star Game of Maryland Sunday. The North claimed a 4-1 decision at Oriole Park at Camden Yards.

As an incoming plebe at the United States Naval Academy, recent John Carroll School graduate Matt Archibald may one day deal with adversity created by the sudden appearance of surging water, but that is not a scenario the talented right-handed pitcher expected to contend with on the mound in his final appearance donning a Patriots cap.

While tossing warm-up pitches prior to the start of the second innings of Sunday’s Brooks Robinson High School All-Star Game at Oriole Park at Camden Yards, Archibald and the rest of the North All-Star infield had to take evasive action as the field’s sprinklers suddenly came to life with the intensity of a Nerf Super Soaker for a handful of minutes.

“When those sprinklers came on, I just tried to avoid getting wet,” said Archibald, who helped guide John Carroll to the MIAA A Conference Tournament finals a couple of weeks ago. “I did a pretty good job, but I still got a little wet. That was definitely an experience I won’t forget.”

The same can be said for his performance on the mound in the North’s 3-1 victory over the South. Archibald fired two scoreless innings for the North while recording five strikeouts, including fanning the side after giving up a lead-off double to right field by Broadneck’s Nick Stergiou in the top of the second inning, to earn his side’s Most Outstanding Pitcher award.

“I came out a little nervous and then the first warm-up pitch I threw, I was locked in,” said Archibald. “I felt good. I felt confident. I trusted my catcher . . . . I just wanted to advance with the fastball, get ahead, and I was able to take care of it today.

“Playing at a venue like this year is something you can only dream of and being able to do that at a young age is something I can’t describe and something I will never forget.”

Reservoir catcher Ben Davis expressed similar feelings after he earned the South team’s Most Valuable Player honors as the left-handed swinger belted a double to left-center field in the fourth inning and then scored his squad’s lone run in the top of the seventh on a single to center field by La Plata’s Chet Bowling.

Davis rocketed a line drive that went off the glove of the North’s shortstop and into left field to start the South team’s short-lived rally in the seventh. He then stole second base, and eventually scored on Bowling’s one-out base hit.

“I’ve thought about this game for a while, and I always wanted to play in it,” Davis said. “I just wanted to have fun and play my game and have a great time, and I did that today. I was looking for fastballs all day. I didn’t want to get cheated on any swings, especially here, so I was looking fastball, and I got a few.

“I’ve grown up an Orioles fan my entire life. Growing up, I became a catcher because of (former Baltimore catcher) Matt Weiters, so I love seeing this view from behind the pitcher. There’s no better stadium in baseball.”

Chesapeake’s Nick Karls took home the South’s Most Outstanding Pitcher honors as he worked two scoreless innings, allowing just one batter to reach base on a hit batsman in the first inning. He finished the outing with three strikeouts.

Liam Houghton of Good Counsel took home Most Valuable Player honors for the North squad by driving in two of his team’s runs on a double in the decisive fourth inning. Houghton belted a sharp ground ball down the left field line to bring home Towson’s Tariq Talley and Tuscarora’s Kyle Sanger for a 2-0 advantage that grew to three as Houghton eventually scored on a passed ball.

Talley started the three-run rally by legging out an infield single. He then reached second on a wild pitch and stole third base. Sanger walked and reached second on Talley’s steal to set the table for Houghton.

Also of note, Southern’s Michael Martin collected the first hit of the game and reached base twice, including a fourth inning walk.