After losing a big lead in a loss to Severn last year, No. 5 Gilman puts it all together in MIAA A Conference opener against the Admirals; King and Andrews combine for seven goals

by Nelson Coffin
It wasn’t just its much-heralded defense that helped launch No. 5 Gilman’s successful MIAA A Conference season-opener against Severn on Friday afternoon in Roland Park, although that group — featuring seniors Xander Martin, Logan Paff and Hank Bethel and juniors Jack Witherspoon, Wallace Halpert and Jack Stuzin — was indeed impressive in an 11-6 conquest of the seventh-ranked Admirals. 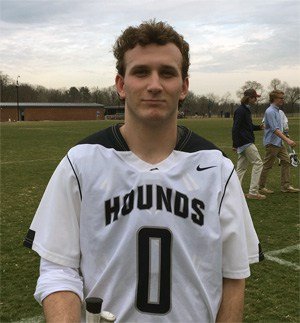 Gilman senior goalie Noah Klein and the Greyhound defense held Severn to four goals until the final two minutes of an A Conference opener on Friday in Roland Park. The Boston University commit had 11 saves for the Greyhounds.

And don’t forget Greyhound senior goalie Noah Klein.
The Boston University commit made some nice early stops among his 11 total saves to give his team confidence to move forward after senior attackman Jonathan Jarosz gave Severn its only lead of the game less than a minute after senior Noah Lastner secured the opening faceoff.
“Noah Klein played great,” Severn coach Joe Christie said. “We had some uncontested chances early and he stopped them.”
Gilman’s offense showed that it has some pop as well, especially junior attackman Sam King (4 goals), senior attackman Andy Andrews (3) and senior midfielder Will Godine (2).
“I think that we’re well balanced, goal through attack,” said Gilman coach Brooks Matthews, who is stepping down in May after his 15th season at the helm of his alma mater. “If one part of our game isn’t on, one of the others parts can pick it up.”
Considering how well junior Nick Tussing did at the the faceoff ‘X’ for the ‘Hounds (5-2, 1-0 conference), all three phases were working for them against the Admirals (2-4, 0-1).
Although it took a little while for the offense to get in synch, everything fell into place for Gilman once King and company started to click.
His first goal knotted the score with just under six minutes remaining in the opening period before Andrews put Gilman ahead for good less than a minute later after converting the first of two-way middie Paff’s two assists.
Andrews then made it 3-1 when he turned junior attackman Dutch Furlong’s feed into a goal with just 90 seconds left in the opening frame.
King stretched the lead to 4-1 on another slick move with just 11 seconds to go in the period.
Severn crept closer on a goal by junior attackman Colin Ervin early in the second quarter, although Gilman countered twice on goals by Godine and junior attackman Casey Doyle to pull ahead, 6-2.
Junior attackman Mike Whiteside finished a Jarosz feed to keep the Admirals within striking distance heading into the second half.
However, the gulf between the teams widened considerably when Andrews, junior attackman Billy Spilman and King produced the only three goals of the third quarter to balloon Gilman’s lead to 9-3 and all but put the game out of reach.
Having lost a big lead to Severn last year in a game that Matthews said cost the Greyhounds a playoff berth, there was little chance that Gilman would allow the Admirals a rally redux.
Klein said that the team “talked through the first goal” without losing its composure.
“We made adjustments,” he said. “I was really happy with our 6-on-6 defense.”
And, after facing the offense on almost a daily basis in practice, he knows that there’s plenty of firepower there as well.
“Sam King’s a dominant guy who’s going to Denver,” Klein said. “He frees things up for the other guys. We have a lot of really good guys.”
Klein added that because of last year, the Greyhounds were not about to let up.
“This win means a lot to us,” he said. “We’re more disciplined this year, we gave a good effort today and I think we’re finally getting some respect.”
Pictured above: Gilman senior midfielder James Schloeder (#11) prepares to pass the ball against Severn on Friday afternoon. The No. 5 ‘Hounds prevailed, 11-6, over the seventh-ranked Admirals.
NO. 5 GILMAN 11, NO. 7 SEVERN 6
Severn 1 2 0 3 — 6
Gilman 4 2 3 2 — 11
Goals: Severn-Jonathan Jarosz 2, Mikey Whiteside 2, Colin Ervin 2; Gilman-Sam King 4, Andy Andrews 3, Will Godine 2, Billy Spilman, Casey Doyle.
Assists: Severn-Kain Domenech, Jarosz, Henry Rentz; Gilman-Dutch Furlong 2, Logan Paff 2.
Saves: Severn-Lukas Sotiropoulos-Lawrence 12; Gilman-Noah Klein 11.