No. 9 John Carroll proves itself at Calvert Hall

Nothing elevates a football program faster than speed and strong quarterback play.

No. 6 John Carroll has an abundance of it all and proved just that Friday night as it went into Calvert Hall and out-played the No. 6 Cardinals and won, 28-21, in front of an over-flow crowd.

“I’ve got chills going through my body right now. I couldn’t be more proud,” said John Carroll head coach Keith Rawlings on the victory. “It’s a special year. We knew this was going to be a battle. We were facing the giants, but our kids came in here determined. They set goals a long time ago and these kids have really worked hard. It’s just a great win for our kids. It’s a great win for the John Carroll School.”

For the second week in a row, Rawlings’ son Kurt, the team’s senior quarterback, and his quartet of talented receivers, were the headliners, with Rawlings throwing four touchdown passes in the victory.

Senior Alex Rasmussen caught two of those touchdowns, as the Patriots (2-0, 0-0) scored one TD in each quarter. Josh Payne-White and Ky’el Hemby had the other two receptions.

“It’s hard for any team to cover our receivers, Ky’el, Josh, Niko (Rice), it’s unstoppable,” said Rasmussen. “We played really well, but we did not pay to our full potential and that’s the really scary thing. We can come out and beat anyone.”

“Those four are as good as you are going to find on a high school football team,” said Keith Rawlings of his receiving corps. “I believe they are all going to be Division I football players. There is a lot of interest in all four of those guys.” 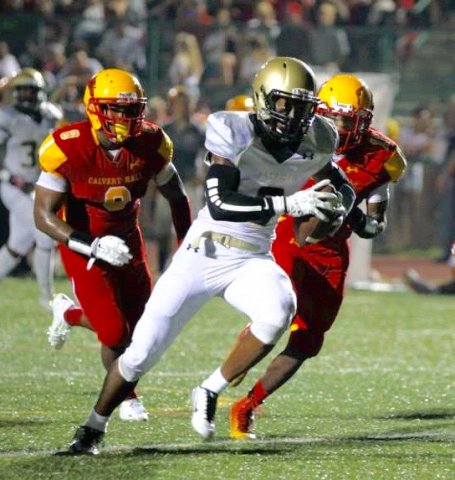 Kurt Rawlings, who was part of two championship teams at St. Paul’s as a wide receiver, transferred to John Carroll last year when his father returned to JC for his second stint as head football coach. With the move, Rawlings made the transition to quarterback. With a strong and accurate arm, great size, speed and elusiveness in the pocket, not to mention so many weapons, Rawlings is making big plays on a consistent basis.

One series in particular stood out. After Calvert Hall (0-2) scored in the final seconds of the first half to tie the game at 14-14, John Carroll surprised the Cardinals with an on-side kick to start the second half and it worked. On the ensuing drive, Rawlings converted two fourth down plays – one with a scrambling 15-yard completion to Rasmussen and the other with a 12-yard scamper. He then capped the drive with a beautiful 21-yard strike to Payne-White for the go-ahead score. The Patriots never trailed again.

Calvert Hall actually drew first blood. After forcing John Carroll to punt on the game’s opening series, the Cardinals drove 45 yards in eight plays with junior quarterback Ben Brooks plunging over from 1-yard out to stake the Cardinals to a 7-0 lead.

From there, the Calvert Hall offense struggled until late in the second quarter, when it took over at it’s own 43 with just 1:23 remaining in the first half. Facing third-and-15 from his own 38, Brooks connected with sophomore Chris Cooper under the Patriots’ coverage. Cooper made one tackler miss and then sprinted 42-yard down field before being pushed out of bounds at the Patriots 10. One play later, Brooks connected with James Crowley for a 10-yard touchdown pass.

Calvert Hall’s other touchdown came at the end of a 10-play drive midway through the fourth quarter. Brooks was 4-for-4 for 54 yards on the march, which was capped by a 1-yard touchdown run by BJ Watson.

Next week, John Carroll will be home to play its first Friday night contest under its new lights, against Delmar.

Friends and Concordia advance in MIAA B soccer playoffs