No. 7 St. Frances wins an emotional showdown with Gilman

The story lines for Friday’s MIAA A Conference football showdown between No. 7 St. Frances Academy and host Gilman School were plentiful, as the Panthers, lead by the majority of the same coaching staff that had guided Gilman to regional and national prominence over the past decade-plus, visited Roland Park for an emotional battle with the host Greyhounds.

Gilman, which is rebuilding under new head coach Tim Holley, the school’s longtime athletic director, entered the contest as a decided underdog, but the Greyhounds turned in an inspired performance, even jumping out to an early 10-0 lead. St. Frances, however, ultimately had too much size and depth, as the Panthers gradually wore down their hosts and grounded out a 27-10 victory.

“It was definitely an emotional day for a lot of us. I’m very proud of both teams,” said first year St. Frances head coach Henry Russell, a Gilman alum who was the Greyhounds’ longtime Associate Head Coach under former Head Coach Biff Poggi. “I thought our kids played great. Gilman kind of shocked us early and we got our things righted and we played real well from midway through the first to the end of the game.”

“I think there was probably a little more emotion in this game than most games, but football is an emotional game,” said Holley. “There is a great love and respect between the former staff and the old players, and the current staff and the former staff. It was a little tense leading up to the game, probably, but once everybody got on the field there were hugs and we just wanted to have a good a football game, hopefully well coached and played by both teams. I think that is what happened.”

Gilman scored on the game’s opening possession as it drove from its own 20 to the St. Frances 11, in 10 plays, before senior Adero Mandal booted a 26-yard field goal, less than four minutes into the contest. The Greyhounds really made things interesting on their third series, as junior Brandon Madison powered off right tackle and raced into daylight on his way to a 98-yard touchdown run, staking Gilman to a 10-0 lead.

St. Frances’ comeback began on the ensuing kickoff when junior Randy Fields broke off a 65-yard return, setting the Panthers up with a first-and-10 at the Gilman 33. Three plays later senior Gary Brightwell scored on a 10-yard run. When quarterback Adrian Ace Baldwin completed a 2-point conversion pass to Fields, St. Frances was back within two, at 10-8.

Early in the second quarter, St. Frances took the lead for good on a 9-yard touchdown pass from Ace Baldwin to junior Terrell Smith and the Panthers built a 20-10 halftime lead when junior wide receiver Tyree Henry made an incredible leaping grab in the back of the end zone with 1 minute, 18 seconds left in the second quarter. 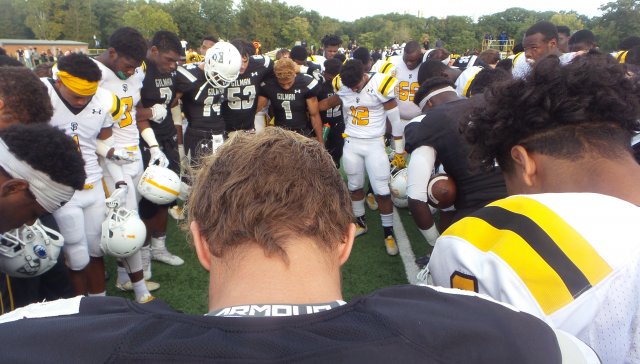 Unfortunately, Henry, a transfer from Stephen Decatur who has begun to pile up Division 1 scholarship offers, was seriously injured on the second play of the third quarter after a short reception. Henry, who is 6-feet-4, 240, appeared to absorb a helmet-to-helmet blow as he fought for yardage along the Gilman sideline. He was momentarily knocked unconscious and when he regained consciousness he advised medical personnel that he could not move or feel his legs.

The incident, which delayed the contest approximately 45 minutes, left players and fans visibly shaken and both teams gather in unity at midfield and prayed for Henry’s well-being. Before being transported to the hospital, Henry was immobilized, but, according to St. Frances athletic director Nick Myles, some feeling had returned to his legs.

“He went to the hospital, so we have to check on him and see how he’s doing,” said Russell after the game. “We just need a lot of prayers for him and hope he is OK.”

When the game and the opening drive of the third quarter resumed, St. Frances really got its running game in gear, completing an 81-yard, 12 play drive with a 3-yard scoring run by Brightwell. Brightwell carried the ball six times for 29 yards on the drive and his second score. The speedy back finished the contest with 98 yards rushing on 22 carries. Freshman Omar Savage also gave the Panthers excellent production in the running game, carrying 20 times for 87 yards.

Russell expanded on the emotions of the day.

Pride was the optimum feeling for Holley as well.

“I am proud. We put up a great effort. It was an emotional day for a lot of different reasons,” said Holley. “They are a very good football team and a very well coached football team, but we didn’t die.

“We got out quickly. I think we did wear down a little bit, but they have very good players and they do a lot of good things. We’re getting better. We’re strapping up every day, plugging along like the tortoise versus the hare, but I am very proud of the kids’ effort and I am very proud of what they are trying to accomplish.”

St. Frances (6-1 overall) is now 2-0 in the MIAA A Conference heading into next Friday’s massive showdown at No. 1 McDonogh School. Gilman (1-5, 0-2 MIAA A) will go on the road next Friday as it travels to Calvert Hall College.

One more game at Reitz