No. 6 Curley stays undefeated in the MIAA A Conference Petryszak drives in four with a pair of doubles; Gaeta hits a two-run home run as Friars defeat No. 4 Mount St. Joe

Visiting Archbishop Curley remained undefeated in MIAA A Conference baseball with a resounding 11-5 win over No. 4 Mount St. Joseph on Saturday afternoon in Irvington.

The game was nip and tuck and tied, 3-3, after five innings of play, before Coach Joe Gaeta’s Friars (11-4 overall, 4-0 MIAA A) erupted with six runs in the top of the sixth to put the game out of reach.

Coach Phil Kraska’s Gaels (9-5 overall, 3-3 MIAA A) were coming off a tough and pressure packed one run loss at Calvert Hall on Friday night, when the Cardinals long time coach Lou Eckerl made history with his 461st of his career win in a Calvert Hall uniform.

On Saturday, it was a bases-loaded double off the bat of Curley third-baseman John Petryszak that broke open the close game.

Petryszak had two doubles and four RBI on the day, and catcher Zach Gaeta hit a two-run home run and finished with three RBI. In addition, clean-up hitter Ryan Edmonds chipped in with two hits, two RBI, and three runs scored, while lead-off batter Harry Middlebrooks was 2-for-3 with a run scored.

“I knew I had to break the game open [ in the sixth], because earlier in the game, I came up short,” said Petryszak. “I was looking for something I could hit in the gap and I hit a fast ball.”

Zach Gaeta said that moving into a tie for first [with Archbishop Spalding] is a result of hard work. “We put in the work day in and day out, and we have the will to win.” 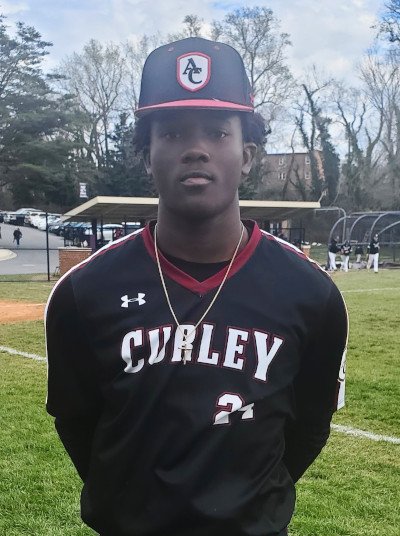 “My curve ball was working and that’s what usually gets me by,” said Gladden. “I had good command of my fast ball.”

“We got a good pitching performance [from Gladden ] and that set the pace, and we supported him today,” said Coach Joe Gaeta.

On the quick 4-0 league start on the season, Gaeta added, “Everything is close in the MIAA, and we were fortunate that we got some timely hits today. Keeping it going, will take consistency, approach, and focus,. It’s a long season.”

Kraska’s Gaels entered the weekend at 3-1 in the Conference.

“You’re not going to win when you give up eight walks and make three errors,” said Kraska. “We’re going to continue to push hard and keep going, and set our sights on the playoffs.”

Shortstop Zach Wainio had two hits and scored two runs for the Gaels, and catcher Jack Bahouth had a single and two RBI.

The Friars will travel to No. 4 Calvert Hall on Monday to take on the Cardinals. Next Wednesday, the Mount will face top-ranked Archbishop Spalding in Anne Arundel County.

Pictured above: John Petryszak (left) smacked two doubles and drove in four runs and catcher Zach Gaeta had a home run and three RBI to lead the Curley offense in its 11-5 win at St. Joe on Saturday.