After opening MIAA A Conference lacrosse play with two consecutive losses, including a surprising 14-13 setback at Mount St. Joseph, 5th-ranked St. Paul’s is now surging. On Saturday, the Crusaders won their fourth straight game, as they were lead by the outstanding play of junior goalkeeper Alex Rode in a 13-6 victory at Gilman.

In a physical battle between two storied programs, St. Paul’s stuffed Gilman early, building a 9-0 first half lead to put a damper on the Greyhounds’ Alumni Weekend festivities. Rode, who has already committed to the University of Virginia, made six first half saves, often frustrating the Greyhounds at point blank range, and finished with 14 for the game. 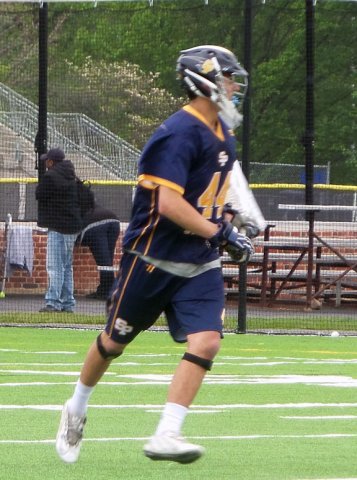 Like any great goalie would, Rode passed most of the credit to the defenders in front of him.

“I think I played OK. I played pretty good, but our defense played great and they zoned it up and let me get shots I thought I could save,” said Rode. “They’re physical and they played good.”

Rode also said the Crusaders have reached a great place in their season, with a four game winning streak.

“We definitely put ourselves in a hole, losing two off the bat, but the team’s coming together, we’re meshing well and we’re just trying to win one game at a time because that is what we need to do right now.”

Senior attackman Mitch Gordon put the Crusaders on the board in the game’s opening minute and scored 2 of his 3 goals in the opening quarter, as St. Paul’s pitched 5-0 shutout in the opening stanza.

“That’s important,” said St. Paul’s coach Rick Brocato in reference to his team’s fast start on Saturday. “We were excited to play and to be here. It’s a great new facility here and it’s a family day, so we knew we had to match their intensity, because they were going to be excited to play in front of a homecoming crowd.”

Senior Patrick Karey also scored three times for St. Paul’s and Joe Pollard had a pair of goals, while Keegan Pearl and John Faus each had 1 goal and 1 assist. In addition, Tyler Rockhill, Brendan Tschrene and Riley Gaeger had 1 goal each.

Gilman’s best quarter was the third when it outscored the Crusaders 3-1, but it was too little too late as they trailed 10-2 at the half.

On the other hand, St. Paul’s may be turning it on at just the right time, according to Brocato.

“We feel like we’re getting some things done that we need done in practice and we’re playing well,” said the Crusaders’ veteran head coach. “The first 14 games we had 13 different lineups. It’s really hard to get any continuity going there, but I was really proud of the kids for sticking together when everybody around them was doubting them. This league is about survival of the fittest and murders row.”

With the win St. Paul’s (10-5 overall) improved to 4-2 in the league and is now tied with Calvert Hall for third place, while McDonogh and Boys’ Latin share first place at 6-0. The Crusaders will attempt to keep their run going on Tuesday when they visiting Severn.

The Greyhounds (2-11 overall) fell to 2-4 in the conference. They are currently tied for sixth place with Severn, so the playoffs remain possible. Next up for Gilman will be a key home game, on Tuesday, against Mount St. Joe.