No. 4 St. Paul’s continued its successful 2013 return to the MIAA A Conference, Monday, topping No. 13 Calvert Hall, 3-2, at Paul Angelo Russo Staidum, behind a pair of goals by Nate Hall.

Despite the two tallies by Hall, the winning goal was netted by Brady White with three minutes to go in regulation as the Crusaders.

Hall’s goals both came in the first 13 minutes of the contest and St. Paul’s (5-2, 4-2) held its 2-0 advantage until the Cardinals’  Brad McKim scored on a feed from Camilo Sanchez, at the 28:51 mark of the second half.  Ten minutes later, Joshua Bender converted a penalty kick to tie it up for the Cardinals (3-3-1, 1-2-1), but White spoiled the comeback with his winner, on an assist from Hall.

On his first goal, Hall said, “There was a scramble in the middle, and Brady (White) slotted the ball over to me.”  On his second tally, the junior forward said, “I got the ball down the line, and got into the box, and took a quick shot.”

Hall also had the assist on the winning score by White.  White said, “I saw Nate on the side and he saw me in the middle and got the ball to me.”

White praised the play of the Cardinals on their gallant comeback. “Calvert Hall gave an incredible effort; they came back well and gave us all that we could handle.”

Bender said that the Cardinals played well, but they just came up short.

The Cardnials will face top-ranked McDonogh in Owings Mills on Wednesday, while the Crusaders next conference outing is a week away at Archbishop Spalding, next Monday. 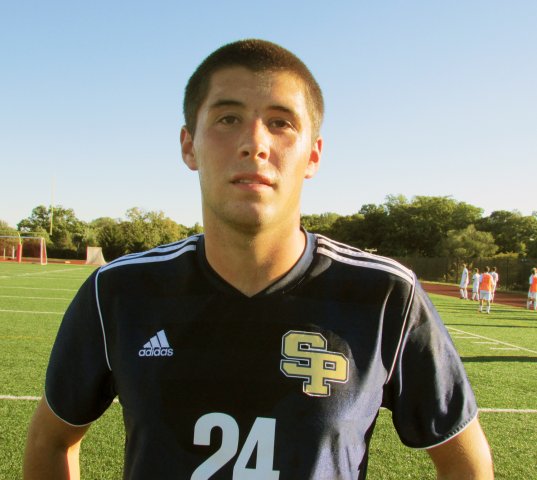