No. 2 Curley scores a pair in the second half to down Boys’ Latin

Anderson scores both goals to lift the Friars

by Joe DiBlasi
Making its first visit to Boys’ Latin since the Lakers enter the MIAA A Conference this fall No. 2 Archbishop Curley got a pair of second half goals from senior forward Jalen Anderson to prevail, 2-0, Wednesday afternoon in Roland Park. 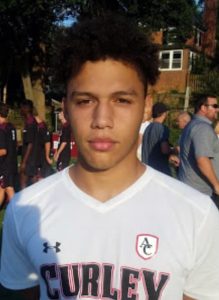 Senior Jalen Anderson scored both Curley goals, in the second half, as the Friars defeated Boys’ Latin, 2-1.

The two teams played a scoreless first half, but Anderson broke the ice 10 minutes into the second half on a perfect ball from Justin Karas.
“Justin made an incredible step, up to the ball,” said Anderson of the first score. “He won the ball around a 30-30 and he took on the defender, and played a beautiful ball in for me to finish.”
On his Insurance goal, with 8:33 to go in the game, Anderson gave all the credit to senior midfielder Dylan Sloan.
“Dylan played a great ball [on a free kick],” he said. “It was an amazing, perfect spot-on, and I was able to get in position to head it in.”
Curley’s veteran coach Barry Stitz said that his team played very well in spurts.
“We moved the ball well and created some good chances but didn’t finish,” said Stitz. “We were actually out of sync a few times.
“I brought in some players off the bench who really stepped up. Jason Karas had the assist on Jalen’s first goal, Sal Schianodacopa gave us 30 good minutes in the back, and Anthony Schlee created some problems for Boys Latin today.”
Stitz also praised the Lakers.
“They’re coming up from the B conference, and they play very hard. They gave themselves a chance to win today. This was not an easy win for us.”
Laker coach Aaron Urban-Zukerberg lauded the play of his keeper Nate Brown, who started in the nets for the first time this season, after coming back from a shoulder injury suffered during pre-season training.
Brown, a senior captain, had 12 saves on the day and he kept Lakers in the game throughout.
“He changes the dynamic in the goal for us,” said Urban-Zuketberg. “His presence in the goal, his voice, his leadership; he’s fantastic.”
Coach Urban-Zuketberg said that his players need to get comfortable in the new conference setting.
“They’re seeing how different it is to watch an A conference game, as opposed to playing between the lines and in an A conference game. They know what a difference it is now in the speed of play, the competitiveness and the physicality between the A and the B.”
In addition to the Lakers moving up to the A, the situation in the A conference is also different this year for the Friars.
With two five-team divisions now established in the a conference, coach Stitz said he prefers to play each team twice, as it has always been in the past.
“Now you only play the teams in your division twice and you play the teams in the other division once,” said Stitz.
The new format may help Stitz, since Curley is off to a 3-0 start in their division.
“We have John Carroll at home on Friday, and if we can get to 4-0, all four wins would be wins against teams in our division I’m not sold on the new format but we’ll see how it plays out.”
NO. 2 ARCHBISHOP CURLEY 2, BOYS’ LATIN 0
AC 0 2 — 2
BL 0 0 — 0
GOALS: AC- Anderson 2.
ASSISTS: AC- Karas.
SAVES: AC-Denholm 5; BL- Brown 12.