Archbishop Spalding and Calvert Hall, ranked No. 1 and No. 2, respectively, in the VSN Baseball Top 20, have clearly been the top two teams in the MIAA A Conference this spring. Spalding, however, has been just that much better, as the two time defending A Conference champs completed a regular season sweep of the Cardinals, Friday night in Towson, with a 3-0 victory at Carlo Crispino Stadium.

LaVale Hodges blasted a 3-run first inning home run for the Cavaliers and neither team would score again. Spalding’s Zach Thompson tossed the shutout, going the distance with 7 strikeouts while allowing just 3 base hits.

Spalding center-fielder Billy Godrick greeted Calvert Hall starter Ben Weber with a line single to center to start the game and promptly stole second base. David Harding then walked in advance of Hodges, who powered a high fly-ball over the left-field fence as the Cavs jumped up immediately.

“I think it was a slider. He left it right down the middle, so I hit it,” said Hodges of the pitch he hit out. “It’s always good to help your pitcher out. We scored some runs and he didn’t have to pitch behind.”

Weber allowed another single in the inning but got out of it without further damage. He would last 3.2 innings, allowing 5 hits while striking out 5 and walking one. Matt Hentschel pitched the final 3.1 innings for the Cardinals, allowing just one hit and striking out four.

Spalding finished with 6 hits with no one having more than one. In addition to Hodges’ home run, Nick Vermillion had a double. AC Chavis led Calvert Hall’s lineup with a 2-for-3 performance.

According to Hodges, Spalding expects a tough challenge every time out. 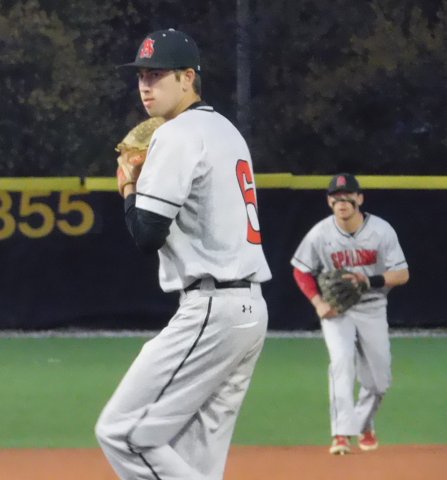 “We come to practice everyday having the mindset that we have to get better, work harder because this league is very hard and every team comes to play, throwing their best pitchers at us,” added the senior.

For his part, Thompson appreciated the early support.

“The first three batters getting to home plate, that was awesome,” said Thompson, who is now 6-0. “It’s hard not to throw strikes when you’ve got guys scoring for you like that.”

Spalding is now an eye-popping 18-2 on the season and 9-1 in the A Conference. The Cavaliers own a 2-game lead on the second place Cardinals (11-5 overall, 7-2 MIAA) as well as the tie-break, so they appear well on their way to entering the post-season as the top-seed.

Blittersdorf drives in four to lead John Carrol past Loyola