At some point all great teams have to overcome adversity and top-ranked Mount St. Joseph did just that, Monday, on the soccer pitch at Loyola Blakefield.

Playing without one of its top offensive playmakers, senior Jake Mazzei, who is recovering from a concussion, and receiving an inspired challenge from No. 14 Loyola Blakefield at one of the toughest road venues in the MIAA, the Gaels persevered through a scoreless regulation to escape with a 1-0 overtime victory that kept them atop the MIAA A Conference soccer standings.

Junior Tolo Iluyomade scored the game winner with 5 minutes, 14 seconds remaining in the first overtime, as he got his foot to a corner kick, played to the near post by Ian Reger, and elevated it into the top of the net to set off a St. Joe victory celebration.

Iluyomade had been inserted into the contest just prior to the corner kick, which was created by a strong run down the right side by junior Tyler Collins.

“Coach told me to go in the 6-yard box. I went there and I saw Ian. He kicked the ball and I knew I could get there and I just tried to get a foot on it,” said Iluyomade of his winning score. “We just kept fighting. We knew we would get the goal. We knew we could stop Loyola from getting an opportunity and when our time came we would score.”

“This year we have a really good team. Anybody off the bench can come in and they can improve the team. They can all make plays and help us win the game.”

Loyola (3-6, 3-6), which defeated Calvert Hall when it was ranked No. 1 earlier this season, seems to save its best performances for the top teams. The Dons more than held their own in the opening half, especially the first and last 10 minutes and had the Gaels on the ropes frequently in the second half, forcing St. Joe senior goalkeeper Nick DeShong to make nine saves.

Thomas Dendrinos and Marci Desormeaux each made several great runs, as the Dons got the ball deep on each wing and played the it back into the box. Unfortunately for Loyola, they could not beat DeShong.

“This is probably our best 80 minutes. I thought, for the most part, we had a fair amount of possessions. I thought we created eight to a dozen good opportunities,” said Loyola coach Lee Tschantret. “Their keeper is a very good keeper. Nick is a great keeper and he made a lot of good saves and their defenders made some sliding blocks. We missed a couple of one-on-ones and those things come back to haunt you against a team like this.”

St. Joe coach Mike St. Martin credited the victory to his team’s depth and ability to keep after their opponent to the end. 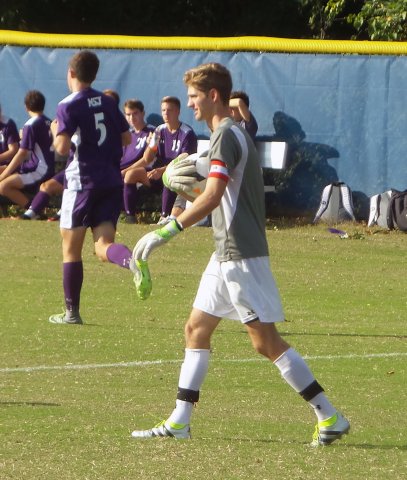 “I think we had some opportunities in the first half we didn’t take advantage of. I think over the final third, we didn’t connect as well as we could have, but we have 25 guys on the team for a reason,” said St. Martin. “Tolu did a great job. I subbed him right before that corner kick and he did a great job making a near post run and a great ball by Ian Reger to put it in there, and a great finish.”

According to St. Martin, a win at Blakefield is always hard-earned.

“This is a tough place to play. It’s tough to come here, on this field, and play. It’s a little different than on our turf field, but to get a win here is huge. It keeps us atop the MIAA A and to do it in overtime that way, it’s a big win.”

The win separates St. Joe from a first place tie with Archbishop Curley and Calvert Hall, giving the Gaels 22 points, three of ahead of both the Friars and Cardinals. Loyola, despite it’s strong performances against all three top teams, is currently in seventh place with 9 points and would not make the playoffs if the postseason started today. The Dons, however, are just one-point back of sixth-place John Carroll and only two behind fifth-place Gilman with nearly half of the regular season to play.

The Gaels will travel to Westminster on Tuesday for a non-conference game before returning home on Friday for a rematch with No. 4 McDonogh, which handed them their only league loss thus far.

Loyola also has a busy week. The Dons will host Archbishop Spalding on Wednesday and visit No. 2 Curley on Friday.

Spalding boys take down No. 18 Severn for first win

Heavenly crown for the Saints

A win for Pete