In addition to a long line of fans waiting to get inside Paul Angelo Russo Stadium in Towson on Friday night, the fanfare surrounding the 15th annual Reif Alumni Cup was a sight to behold.

And the action inside between the top two soccer teams in the Baltimore metropolitan area — No. 1 Calvert Hall College and second-ranked Archbishop Curley — was just as intense with the host Cardinals hanging on to first place in the MIAA A Conference after an entertaining 2-1 victory.

Perhaps feeding off the standing-room-only crowd estimated to be more than 4,000 strong, Calvert Hall took the opening tap and came close to scoring within the first 15 seconds of the match.

Just 30 seconds later, the Cardinals (5-1 overall and MIAA A) did take a 1-0 advantage on a solid shot by senior midfield/forward Brady O’Connor propelled past Curley senior keeper Ben Gentry.

“We were playing for something a little bit more than just ourselves tonight, and the boys came through with an early goal, and that really helped us,” Calvert Hall coach Rich Zinkand said when asked about the emotions surrounding the team because of the death of junior midfielder Trey Satllings’ father earlier in the week and because of the electricity in the jam-packed stadium. “We told the boys just to embrace it, because they might never play in this atmosphere again.”

From Curley’s perspective, it could not have been a worse beginning.

“We dug ourselves a hole there,” said Archbishop Curley coach Barry Stitz. “You just can’t afford to do that.”

Quickly regaining their poise after the initial shock, the Friars (6-1-1, 3-1-1 MIAA A) began their assault on the Cardinal goal, nearly notching the equalizer when a ball hopped over a defender and rolled toward the goal where it was struck toward Calvert Hall goalie Kyle Cooper.

The senior scrambled into position to make an awkward-looking but effective kick-save to keep Curley off the board until the final minute of the first half.

That’s when junior midfielder Nick Balcer laced a shot into the far corner from 10 yards out to knot the score and tamp down the home crowd’s enthusiasm.

Given the recent history of a series that is now all even at 7-7-1, it’s no wonder that Calvert Hall was so intent on building a winning streak of the type they snapped last year in prevailing, 3-1.

Senior forward Ben Alexander scored twice in that victory to end a five-game series skid for the Cardinals, although the Curley defense played the University of Kentucky-bound star to a standstill in Friday’s match until the 58th minute on Friday night.

On a long free kick by senior midfielder Chris Carroll into the mouth of the goal, Alexander knifed through a crowd to head the ball past junior Nathan Wdzieczkowski, who typically has platooned with Gentry this season for the Friars.

Carroll also assisted Alexander twice in a 3-2 overtime victory over McDonogh School last week, including the game-winner in overtime.

“Believe it or not, last year was our first year playing together, but we’ve been playing against each other since we were 8 (years old),” he said. “But we’ve been winning, and that’s been nice.”

After taking the lead, Calvert Hall, despite giving up late goals in a recent win over McDonogh and a loss to Loyola Blakefield three days earlier, did not pack it in and attempt to clog Curley’s offensive third.

Instead they authored several counterattacks while the Friars strived to even the score in a match that featured pleasing offensive maneuvers by both sides. 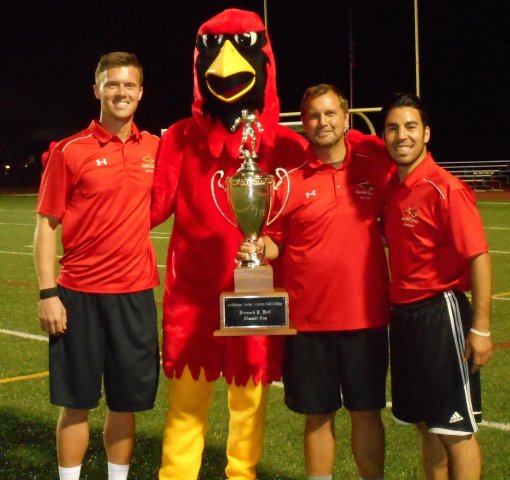 Curley had several promising opportunities in the late going, including a 40-yard rocket on a direct kick by senior midfielder Alejandro Arbelaez that drifted wide, a 20-yard sizzler that missed high by senior forward Matt Bummet and a 10-yard offering by senior midfielder Brenden Hollingsworth that was also smoked wide.

“We felt this game was really bigger than us,” Carroll said, echoing his coach’s words. “We had to do it for Trey.” 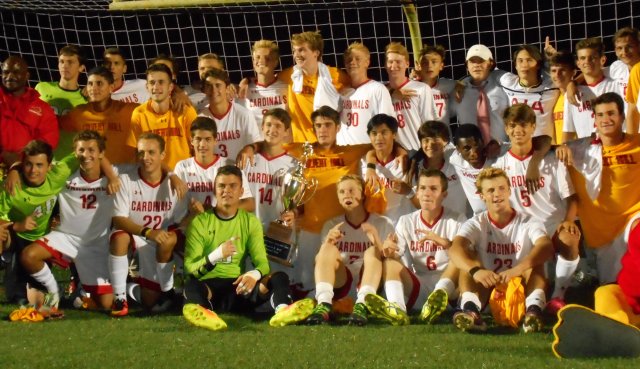 Curley storms back to upend John Carroll in football opener