Last year Mount St. Joseph (No. 1 per the Maryland State Wrestling Association) defeated No. 5 McDonogh in a dual meet for the first time in quite a few years. The Gaels were not able to follow that up with the tournament crown as McDonogh enjoyed a magical final round and walked away with the Lehigh Cup. Up by 18 going into the final round, the Gaels made sure the Eagles would not enjoy such magic this year, as St. Joe completed the sweep for the MIAA tournament crown on Saturday at the Smith Center on the campus of Mt. St. Joe.

The Gaels, who had a tournament high nine finalists, saw all 14 of their grapplers reach the podium, while the Eagles pushed 12 to the awards stand. That difference proved to be the edge as St. Joe outpointed their rival by 13, 286-273.

“I was so happy for our seniors, Shawn Orem and Neil Schuster to finish with back to back MIAA titles,” Gaels coach Harry Barnabae said. “They still recalled the seesaw loss to McDonogh in last year’s tournament. The team was determined not to have that happen again. We knew we needed the entire team to step it up, and they did, as all 14 wrestlers placed.

“Connor Strong, who missed most of the season due to an injury, wrestled very well and captured 113lbs as a freshman. I feel the future is very bright for Connor. Paul Warner, stepped up a weight class to wrestle heavyweight.  Paul barely weighs 200lbs but used his quickness to finish fourth, which was huge for our team. I felt all our finalists had strong performances throughout the tournament. And the others battled back to place in the top four. Congrats to the McDonogh team, as they always come prepared. I’m sure we shall see more of the same as we compete in the state tournament next weekend.”

The way the scoring played out, when Schuster stepped on the mat, a win by him would clinch the title for St. Joe. He delivered with his second title, edging McDonogh’s No. 12 Dominic Solis, 1-0, after winning by major-decision in their prior meetings. Schuster also won the Edward T. Russell Trophy for earning the most team points of any wrestler in the tournament.

“I had no idea (about his match being the potential clincher). That’s kinda scary,” Schuster added. “Thinking about it now, no, I had no idea. The second title is alright, but winning as a team is way bigger for me. We kinda had a heartbreaker last year, didn’t want that to happen again. My senior year it’s nice to bring it home. I got in on him a couple times, but wasn’t able to finish. We went out of bounds, I think, once or twice. (I) wasn’t incredibly happy with it, but I got it done. I did what I needed to do.”

Strong defeated McDonogh’s Sean Scott (No. 19), 7-2, for his title. It was his second win over Scott this year. The first was in their dual meet, 9-2.

“I feel really good about it (winning his first MIAA title),” Strong added. “Training hard this week. Coming back from a shoulder injury, so it means a lot to get this title and I worked really hard for it so I’m pretty excited. I felt like I wrestled pretty well. I focused on go behinds off bad shots, so I wasn’t hanging around in bad ties and stuff like that. I would have liked to get to my turns a little more, and maybe gone neutral in the second period, but overall I felt pretty good.”

Orem downed No. 3 Caden Mareno (McDonogh) for the third time this season, and his second straight MIAA crown. This one was in overtime, 7-5. The previous meeting at FloWrestling’s Who’s #1 also went overtime, with the same score. Orem beat Mareno 11-4 in their first match.

“Everything was for the team,” said Orem. “I knew the team score was tight. I knew having a head to head (with McDonogh) was big, so I just wanted to get it done for the team. He’s a tough kid, so I knew I had to wrestle pretty tough and I got it done. There was nothing to be upset with.”

Kable, a sophomore, won his second MIAA Championship with a 5-3 win over St. Joe’s Porter. Kable lost the first match with Porter, but has now won the last two.

“It feels pretty good (the second title),” said Kable. “I feel really honored to be in this situation. I felt pretty good (with the match) except for that first takedown. He caught me by surprise, but I felt I did a good job by coming back. My gameplan was to attack from neutral. I wanted to get out from bottom every time, which I did, and that’s really it.”

Devaney became a three-time MIAA champ with a dominant, 12-1, win over St. Paul’s Dylan Blau. The senior, who is headed to the University of Maryland in the fall, pinned all three of his opponents en route to the finals.

“It feels awesome to win my third MIAA title,” Devaney added. “I really enjoy coming to Mt. St. Joe and competing. I felt good this tournament. I was having fun and everything was positive. I was just making sure I did what I needed to do in order to score points. I thought the team continued to progress. We are coming together at the right time. I really can’t believe this was my last MIAA tournament. I still feel like a freshman. I’m very grateful to be part of such a passionate team.”

“It was awesome,” St. Paul’s coach Rob Eiter said. “The kids wrestled hard. I was real proud of them today. Yesterday, we didn’t wrestle at our best. But they came back and showed that we should be here. It’s great (the six champions), but we got next week to worry about now. It just shows the progress that the kids have made in the program and kinda where we’re at and where we’re going.”

Heard won what was arguably the toughest weight of the tournament. In the semifinals, he pinned No.  9 Braeden Alevizatos (Gilman). Alevizatos beat Heard, 5-4, in their dual meet. In the finals, Heard rolled to a 12-5 win over McDonogh’s Gorvett.

“I’ve been working hard all season trying to get ready for the postseason,” Heard added. “I changed everything this summer. I want to be the best I can be, so (I) just keep chugging along trying to win titles, chasing titles. I hope to get a state title next week. I hope to get a national title the following week. (I want) to just get better from here, every time I step foot on the mat.”

Tiongson’s stellar performance throughout the tournament earned him his second MIAA crown and the Charles R. Gamper Outstanding Wrestler Trophy.

“I felt like I wrestled well,” Tiongson continued. “I felt pretty solid out there. I felt like I was hitting my technique well. I just felt like everything was working together pretty well for me. Last year, I think I pinned or teched everybody the whole tournament, and my last match (this year) I only won by 14. But it was a tougher kid for sure in the finals this year than it was last year. This (the outstanding wrestler award) is really nice. Finally, a little bit of recognition. I worked hard all four years and finally get something for it, other than first place. A little recognition from all the coaches feels good.”

Kalishman won his finals match by pitching a shutout against St. Joe’s Stith, 9-0.

“It’s been a long ride with plenty of ups and downs along the way,” Kalishman remarked. “I’ve worked hard, and I have a lot of people to thank along the way. I attribute a lot of the success I’ve had on the mat to my coaches throughout high school, in addition to Dan Ricker, who got me into wrestling. I haven’t achieved my goals for the year yet, and look forward to the rest of the postseason.”

Spalding’s PJ Truntich (120, No. 6) won his first championship after being second last year. The sophomore picked up the only pin in the finals when he decked McDonogh’s Leventhal with 14 seconds left in the first period.

“I’ve been working hard this year, so it feels good,” Truntich stated. “States next week, so that’s big stuff. I felt pretty good. First period pin, but I just gotta keep working hard and get better. I was a little slow off the start, but it turned out pretty good.”

Another first-time champion was Loyola’s Dominick Reyes (152, No. 5). Reyes reversed an overtime loss to Curley’s Josh Laubach (No. 4) from two weeks ago with a 7-5 win.

“It’s an amazing experience,” said Reyes. “I’ve wanted to win a MIAA championship the last four years of my life really, and to cap it off my senior year just feels amazing. Especially, when a year ago at this same tournament, I suffered an injury that cost me the rest of my season. As for the match, I felt like I needed to open up and work my shots a lot more. Josh is a great wrestler. He had beaten me just last week in overtime because I was wrestling his style of wrestling.

“This time, too, I felt like I wrestled timidly and wrestled his style of wrestling. But throughout periods of the match, I was picturing myself having my hand raised, feeling those emotions, seeing the look on my coaches’ faces, etc., and it eventually motivated me to pull through for the win. With no slight to Josh or anyone I wrestled, I felt like I did not wrestle nowhere near my best, nonetheless, it got the job done. I look forward to competing at States and National Preps, and leaving it all on the mat with no regrets. It’s my senior year, so I’d like to leave no “could’ve, should’ve, would’ve” behind in these last two tournaments.”

Barnabae reflected on the journey from a team that was unranked when he took over, to restoring St. Joe to its previous standing of a state power.

“My coaching staff and I had developed wrestlers for twelve years prior to taking the head position at Mt. St. Joe. Many of them had very successful high school careers and continued to wrestle in college. So, in the beginning it was important to continue to develop from within. Our junior league program plays an important role in our success as six of the varsity starters are from the junior league Titans. When you add our coaching staff to a group of young, talented men that wrestle together as a team, then you have a winning formula. I am very fortunate to be here at St. Joe.” 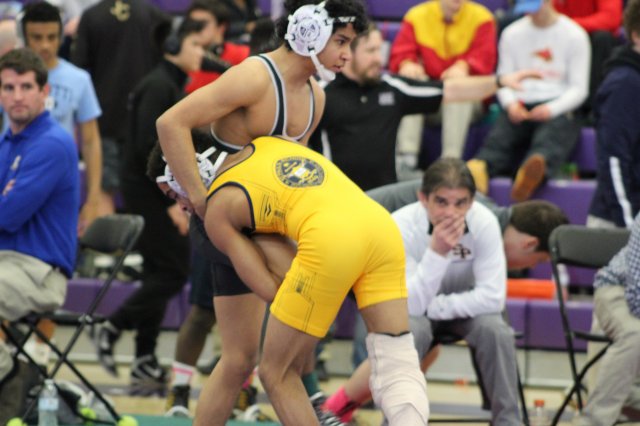 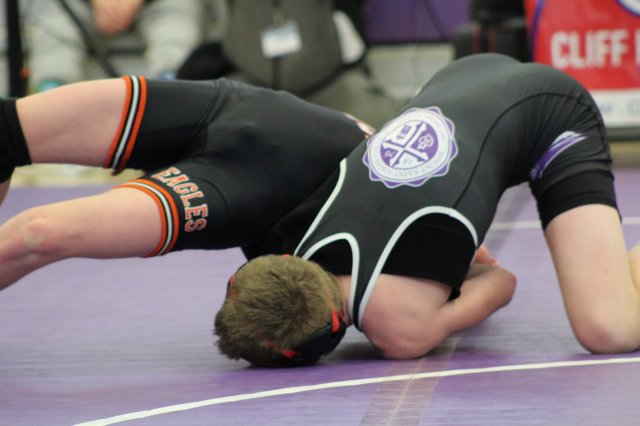 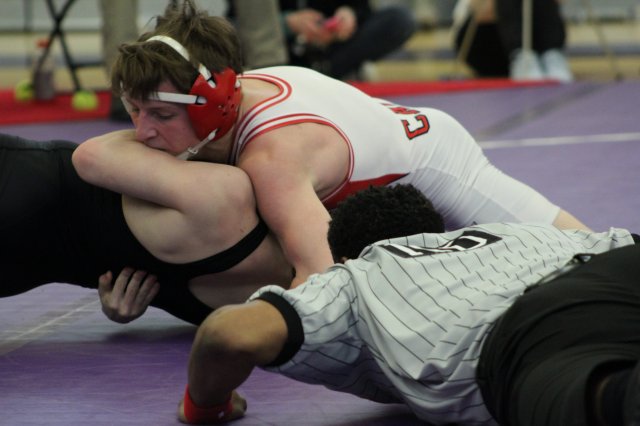 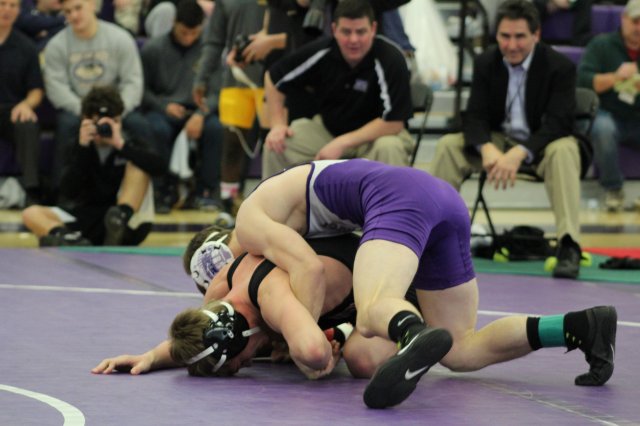 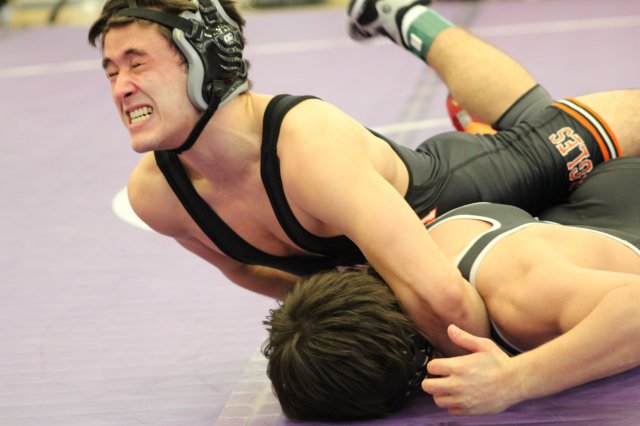 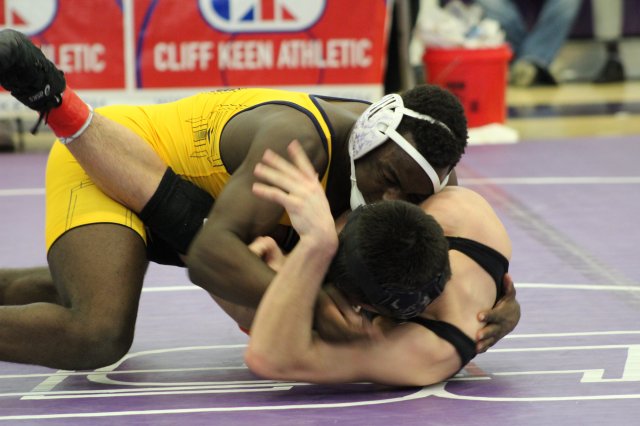 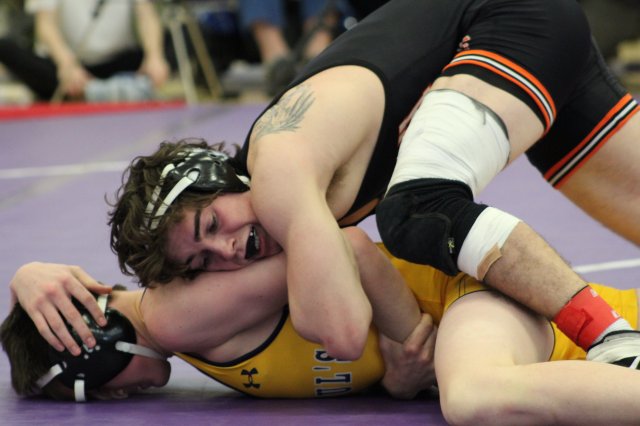 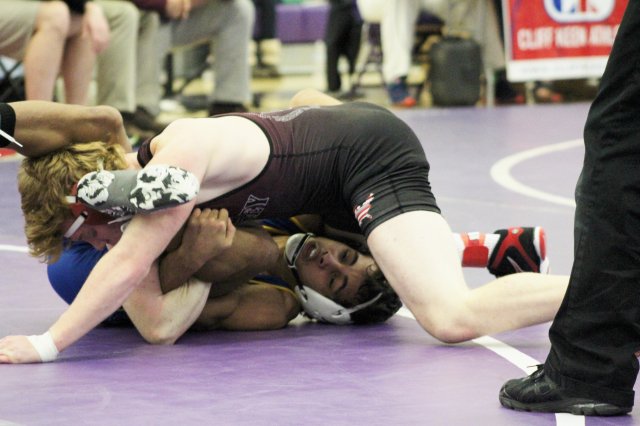 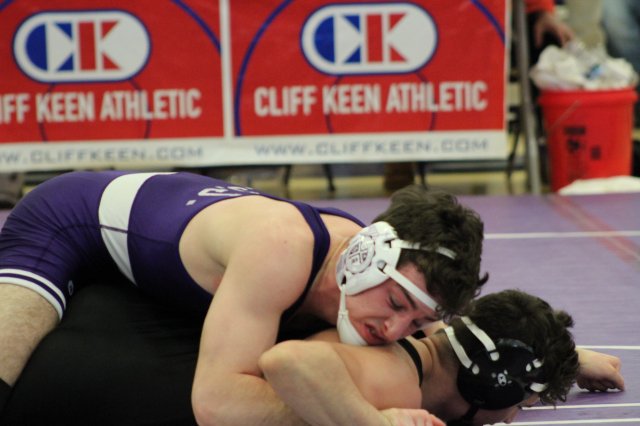 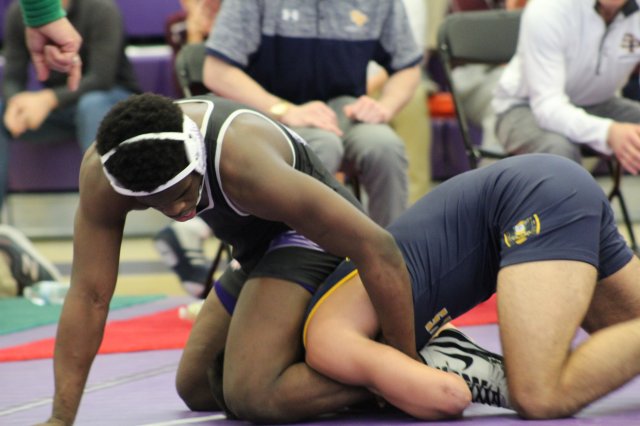 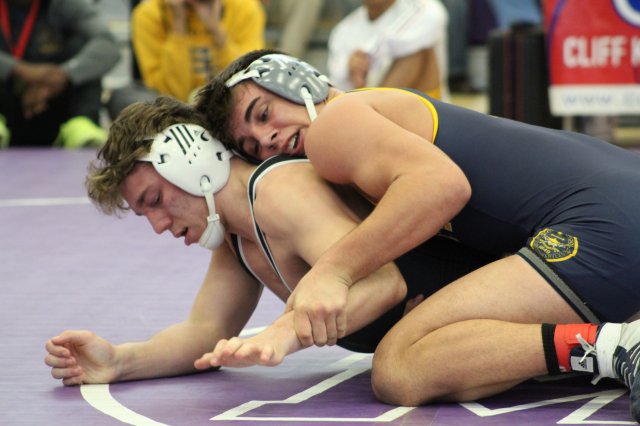 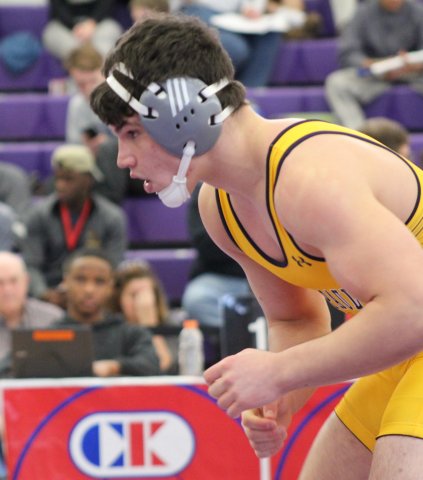 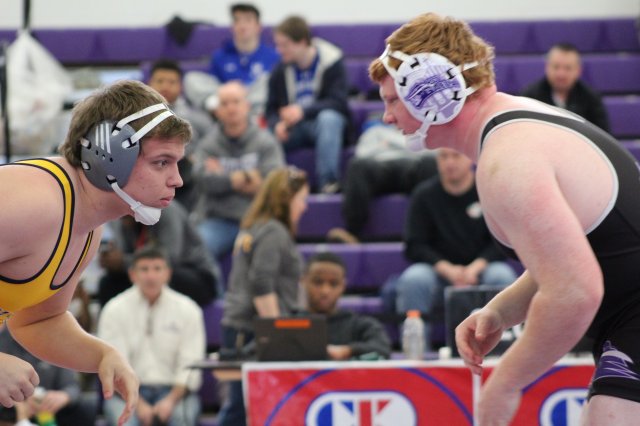 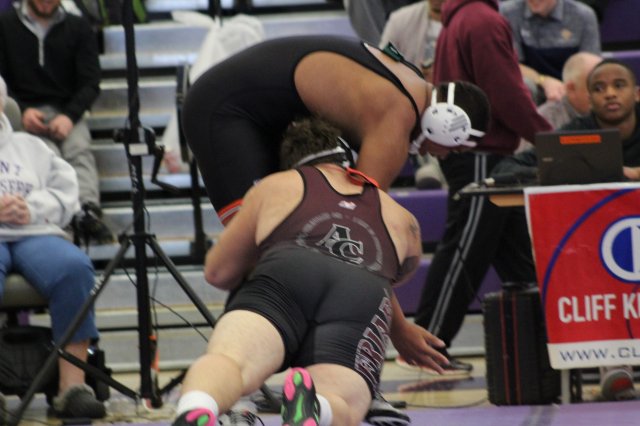 BL completes the 3-peat in MIAA B baseball

Gilman clinches the second seed for MIAA A baseball playoffs