When Loyola (No. 1 in the Maryland State Wrestling Association’s rankings) and No. 3 Mount St. Joseph met at the Bauerlein Duals in mid-December, the Gaels were considered by many to be the area’s and the state’s best team. In recent seasons, Loyola has been climbing the local and state rankings at a steady and impressive clip. That meeting, which the Dons won by a single point, 37-36, pushed Loyola to the No. 1 position in the state.

That Saturday morning meeting came down to the final bout with Loyola trailing by four, 36-32. Jimmy Douglas played the role of hero that day with a tech-fall. The expectation on Wednesday afternoon at Loyola was more of the same.

St. Joe, however, authored a different script and left with a 37-31 MIAA A Conference victory. 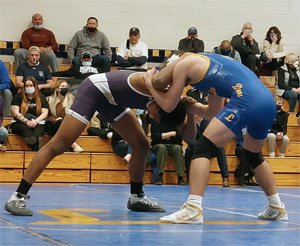 “Loyola has a strong team therefore, we knew coming into the match that we would need a total team effort,” St. Joe coach Harry Barnabae said. “We knew we would have to wrestle our best and secure bonus points whenever possible. Will Hudson’s come from behind victory at 106 is a testament to the team’s determination and drive.”

St. Joe took an early lead, but the Dons came back eventually taking a lead into the last two weights. And yep, you guessed it, this Barn Burner came down to the last match, where No. 1 Carter Nogle secured the fall at 113lbs over No. 6 Logan Kisner with two seconds left in the first period. Interestingly, Carter almost pinned Kisner in the same time as their first encounter (1:52).

“I’m thinking, I’m very glad, there were a few people it would have been good if it came down to them, but I think that I was one of the best (options),” Carter said about his match deciding the meet. “It was very exciting for me.

“I knew coming into that 106lb match, we had to win that, and not necessarily by that pin that tied the score. I was saying before the match, “As long we are down by no more than five points, I would be able to come in clutch for the team. We’re definitely capable of coming in at the end of the year and ending on top at states.”

This meeting was part of a tri-meet with John Carroll, who the Gaels beat 72-12. The hosts downed the Patriots 75-3. So, with two matches wrestled earlier, this one kicked off at 120lbs and No.1 Coleman Nogle wasted little time getting St. Joe off to a positive start with a 44 second decking of Kyle Zhong.

“I was excited to see that 120 was the first weight class in the dual,” remarked Coleman. “I always expect six (points for a fall). Six minutes is a long time to be with me on the mat without getting pinned, so I knew eventually I was going to get it and it felt good starting off the dual in a good way.”

The good vibes continued for the Gaels at 126lbs. On paper, St. Joe’s Evan Eldridge (No. 6) was considered the favorite over an opponent who was moving up a weight, Brandyn Fish (No. 8 at 120). Even with that information, this was still considered a swing match given it would be Eldridge’s first time on the mat since the first week of December.

How would his conditioning hold up? Would there be rust? Picking this one up would be huge for Loyola. Fish was keeping the upset hope alive, going into the third period only down by one, 2-1. Eldridge chose bottom, escaped, and eventually scored the takedown for a 5-1 victory to extend the Gaels’ lead to 9-0.

“I wish I could have done a little bit more, but I love being with the team,” Eldridge said. “Our chemistry is great. We have great underclassmen, and they were really clutch at the very end. I just love to be here. I was a little nervous but I’m pretty confident in my wrestling so once I got on the mat everything kicked back in and I felt like myself again being out there.”

Douglas (No. 8 at 126) would have to climb a greater hill this time to be a savior for his squad as he was facing off with No. 2 Jacob Wright (132). Wright posted all his points in the first period and kept Douglas off the board with a 5-0 shutout. The win put St. Joe up 12-0. 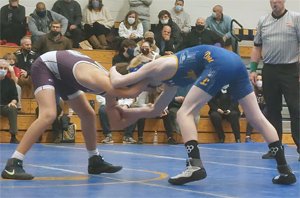 St. Joe’s William Hudson (left) came from behind to pin Loyola’s Cayden Fryer in their 106lb. match, tying the team score with one match to go in the Gaels’ 37-31 victory over the Dons.

Nicolas Barnabae (No. 4) mud-slided Ryan Kness in 33 seconds at 152lbs to take the momentum back from the Dons.

“I was thinking to myself I need a pin,” Barnabae said. “I was just going to go out and do what I do. I just wanted to go out there and wrestle, you know. My head was in the game.”

No. 12 Austin Lewis trailed No. 18 Dallas Mattheu 2-1 after the first period of their 160lb bout. That score rolled into the third after Lewis rode the Don out in the second. Lewis chose neutral to start the final frame. The Gael earned a takedown and the 3-2 lead, which is how things ended, and with it the St. Joe lead grew to nine, 21-12.

St. Joe’s Bryce Phillips (No. 1 at 182) put on a takedown clinic in his showdown with Cole Myers (No. 3 at 170), recording eight in the book while posting a valuable and unexpected major-decision, 19-7.

Staring at a 25-18 deficit, No. 1 Damon Nelson took to the mat hoping to pin No. 10 Ashton Knight at 195lbs. Nelson was holding a 12-0 lead late in the match. Knight was hit for stalling a second time resulting in a point for Nelson.

Up 13-0, the Don’s coaching staff pleaded for Nelson to get one more takedown, and the extra team point. The crowd came alive, cheering him on, but Nelson could not get Knight off his feet and settled for the major-decision.

Loyola finally got one of those swing matches to go their way at 220lbs. No. 22 Alex Fichter took a 5-0 lead, but No. 17 Spencer Toth was not going to lay down. The Gael battled hard, but Fichter walked away the victor, 11-8. Fichter’s work had drawn the score to a tie once more, 25-25.

The Dons probably weren’t expecting bonus points in the heavyweight match. Afterall, it featured their grappler, No. 5 Luke Randazzo squaring off with No. 7 Gavin Bage. In fact, given the closeness of their rankings and Bage’s recent runner-up finish at the War On The Shore, the Gaels were thinking upset.

Randazzo was not going to have any of that, though. A quick spurt of action shortly into the second period led to a 2:33 fall for the freshman, and Loyola’s first lead of the evening, 31-25.

Despite the outcome of their earlier meeting, a second period pin for St. Joe’s William Hudson, the Dons felt good about their chances at 106lbs. In Cayden Farver’s initial dustup with Hudson, he was holding a 5-0 lead before being reversed to his back. A win here would clinch the victory for the team.

After a scoreless first period, Hudson chose top. Farver escaped and worked for the takedown and a 3-0 lead. The action moved out of bounds and the Loyola coaches, with visions of the past dancing in their heads, implored Farver to concentrate on the basics, nothing fancy.

What played out next happened in a painfully slow-motion way for the Loyola faithful. Hudson pulled a reversal that left Farver in a bad spot. The Gael followed through and planted Farver with 29 seconds left in the stanza, 3:31.

As disbelief rushed over Loyola, the St. Joe bench erupted as Hudson had literally brought them back from the brink of defeat. With the score tied back up, 31-31, the team felt pretty confident this win spelled victory for them as Carter Nogle had pinned his awaiting opponent, Kisner, in December.

“I just knew he made a couple of mistakes (last time we wrestled),” Hudson continued. “I was thinking in the match, ‘I’m going to catch him and pin him.’ I wrestled decent. I kinda blanked during the beginning of the match.

“But, I really want to thank Carter Nogle because even after I pinned him the match was tied and I just knew, Carter, one of the top guys in the country would get it done for the team. I was excited. I saw everybody erupt. I was like dang, this is awesome. It was just a great feeling.

“Naturally, you prepare during the week for momentum swings during the entire match,” Coach Barnabae elaborated. “The key was for our wrestlers to stay focused on their individual match and support their teammates while they are competing. I felt the team did a very nice job in both of these areas. Having Evan Eldridge returning to lineup was a huge help. He is one of the team captains and secured his 100th victory in tonight’s win.”

For now, the state’s top designation will have to wait. No. 2 St. Mary’s-Ryken finished ahead of St. Joe at the East Coast Catholic Classic in Richmond, VA a few weeks ago. This result now catapults them to the No. 1 position, with St. Joe No. 2 and Loyola at three.

For Loyola, that fall from No. 1 to No. 3 stings, but the match illustrates the Dons are legitimate contenders for the state title to end the year back in the No. 1 seat.

“It was a great match and it’s what you hope for when two of the best teams in the state square off,” said Loyola coach Steve Truitt. “I told our guys that I was proud of their effort and loved how we competed. We win and lose as a team. Losing hurts but we have to use the loss as motivation. The MIAA’s are in a few weeks and we will dedicate ourselves to get better every day. I love my guys, I believe in them, and I’m excited to see what we can do in the stretch run.”

“I knew back in December we had four of our starters out,” Coleman Nogle added. “They beat us by one at that tournament, but we knew if they beat that version of us it would be different come later in the season. Today, we only won by six. We came in planning to dominate more but at the end of the day we got it done.”

Pictured above: Loyola’s Cole Myers (left) and St. Joe’s Bryce Phillips lock up in their match at 182. Phillips scored 8 takedowns in the match and secured a 19-7 major decision.