Aggressive base running by second-seeded Our Lady of Mount Carmel threw Friends for a loop in the C Conference championship softball game on Tuesday evening at Harford Community College in Bel Air.

Every time the Cougars (10-4, 5-1 conference) put the ball in play, they were bound and determined to take an extra base — and they frequently did just that in overcoming a 3-0 deficit to beat the Quakers, 8-3, and earn the program’s first title in 34 years. 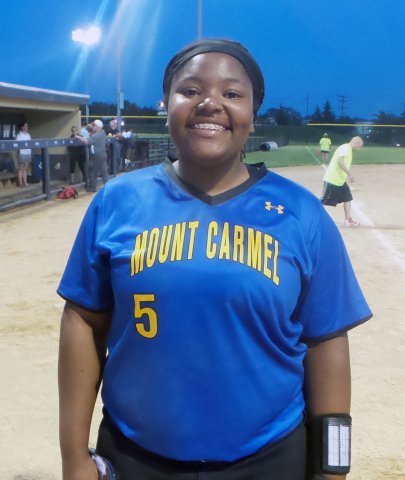 Senior pitcher Lakira Mitchell, who is heading to Grambling University on a softball scholarship, scattered five hits and allowed two earned runs to pick up the victory.

She did not give up a hit over the final four innings.

“I used more pitches,” Mitchell said about changing her repertoire during the game. “I used a curveball, fastball and screwball, but the curveball was working best. I knew I had to pick up my team.”

The right-hander also helped her own cause by going 3-for-4 at the plate with a pair of doubles, a single and an RBI.

Her efforts made a hard-luck loser out of Friends junior Tyler Rifkin, who did not yield an earned run but was still tagged with the loss for the fourth seeds.

A slew of Quaker errors were the culprit.

Friends assistant coach John Meil, filling in for head coach Ken Zalis, said the team was hoping to win the game for Zalis.

“We just made some mistakes (in the field) and then it all snowballed,” Meil said. “Tyler puts her heart and soul into the game, but we just had too many mistakes.”

The Quakers (8-4, 3-3) nicked Mitchell for a run in the second after senior infielder Madison Moore doubled and eventually scored on a groundout by freshman Olivia Nengel.

After Rifkin tripled to open the third, she came home on fellow junior Katie Capizzi’s single to right. The third Quaker run scooted home on junior Lucy Meigs’ pop single to give Friends a 3-0 advantage.

This started to unravel for the Quakers in the fourth when Mitchell doubled and scored on an error.

The Cougars added two runs in the fifth without a hit and piled on five more in the sixth on just two hits and four miscues.

Mount Carmel assistant coach Linda McGinnis knew that once Mitchell made an adjustment to her work in the circle, the Cougars were in good hands.

“She was a little off in the beginning,” McGinnis said. “And then everything clicked.”