Mount St. Joseph High basketball team had one more item to take care of Friday afternoon before heading to Florida for the upcoming holiday break. With pesky Boys’ Latin School waiting its turn to take a shot at knocking off the area’s top-ranked team, the Gaels knew they couldn’t let down their guard.

Despite a gritty performance by the 15th-ranked Lakers, Mount St. Joseph claimed its 11th straight win with a 71-58 victory in the Maryland Interscholastic Athletic Association A Conference Black Division battle in Roland Park. Sophomore guard James Bishop scored 22 points for the Gaels (11-0 overall, 6-0 MIAA A), and University of Maryland commit Darryl Morsell finished with 14.

Before South Beach, Mount St. Joseph had to shake off BL in Roland Park. The Gaels never trailed Friday, opening up a 31-22 halftime advantage, but the Lakers (7-3, 2-3 MIAA A) were stubborn enough to claw back to trail 38-35 in the third quarter on a three-point play by junior guard Connor Walsh.

Mount St. Joseph answered with a 15-5 run filed by a Bishop three-ball and a no-look pass inside by Kendall McMillan to Smith to build a 53-40 gap heading into the final period.vTwice Boys’ Latin whittled the lead to seven points — three-pointers by junior forward Kenny Lewis and Brasher — before the Gaels closed the game with a 10-4 blitz that included another soft Bishop jumper and Jackson’s baseline bomb.

A block by Gaels guard Tyree Myers led to a big defensive stop down the stretch as well, and it all added up to another win for a team that had some problems dealing with the Lakers’ 2-3 and 3-2 zone alignments slowing the tempo.

Bishop continued his breakout campaign, scoring in a variety of ways Friday.

“He’s big-time,” Mount St. Joseph coach Pat Clatchey. “He can play. He’s smooth and confident — and efficient. He doesn’t need many shots to get his points.”

After bolting to a 13-4 advantage five minutes after the opening tip, it appeared that the Gaels might run roughshod over the Lakers until the hosts cut the deficit to 17-15 early in the second quarter after two baskets by promising freshman forward Brandon Murray.

Boys’ Latin coach Cliff Rees said that there is no easy way to stop the Gaels.

“With some teams, you can say they don’t shoot that well or they don’t have size,” Rees said. “But you can’t do that with them because they have size, they shoot well — they have it all.”

The coach added that stopping Bishop is easier said than done.

“We knew he was a shooter,” he said. “The thing we didn’t want to do is give him open looks, but we lost him a couple of times.”

Still, the Lakers have already matched their conference win total in their second year in the A Conference. 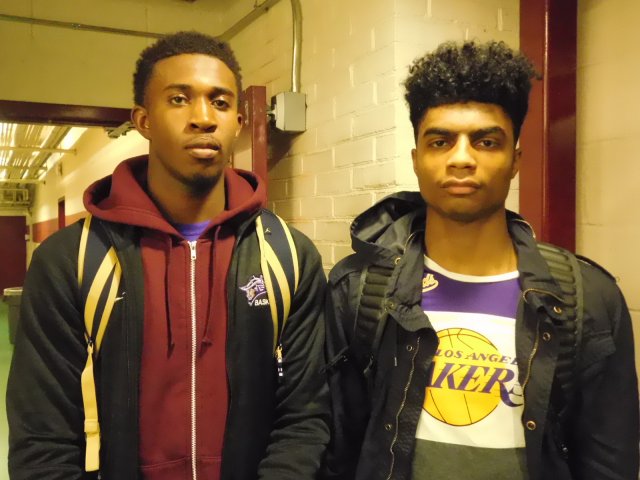 “I love playing against the best,” Rees said. “Our expectation is to win close games, and I thought we played well for 22 or 24 minutes. But we can’t lose to St. Joe by 13 points. Our goal is still to get to the playoffs, and it won’t be easy. But the kids really get excited playing teams like St. Joe.”

Gems of the diamond

Dons make it two straight in MIAA, one at a time