The participants in Sunday’s 35th annual Brooks Robinson All-Star Game, to be played at Oriole Park at Camden Yards, would not be born for another 15-16 years after Robinson, often referred to as the “greatest third-baseman ever,” was inducted into the National Baseball Hall of Fame in 1983.

Robinson’s legend, however, has only grown in the three-plus decades since he was enshrined among baseball’s immortals. During a press conference in the Camden Yards Warehouse, Thursday, today’s rising stars were every bit in awe of meeting No. 5 as their fathers and grandfathers would have been before them.

Cameras clicked and Brooksie smiled for every shot as he presented each player on the North and South squads with their game jerseys and congratulated them on their selection.

Harmon added that he has a few thrills he is looking forward to on Sunday. 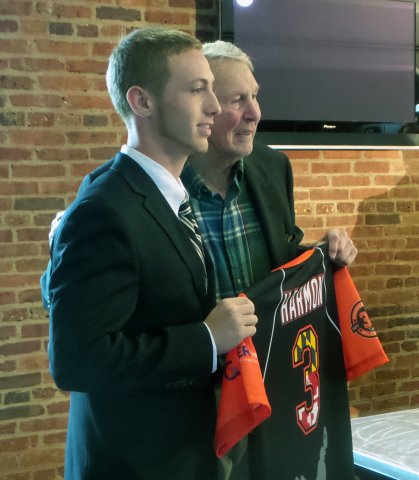 “Seeing my name on the scoreboard. I have been waiting for that day my entire life,” added Harmon. “I’m seeing the first pitch at 85 down the middle and me taking it over the fence.”

One player who understands the tradition is Calvert Hall pitcher Trevor Sprinkle, whose dad played in the Hearst All-Star Game, which was the precursor to the Brooks Robinson event.

Sprinkle also discussed the rush he anticipates when stepping on the Oriole Park mound.

While the game will be exciting for all of the players, it is a final hurrah for five members of the 3-time MIAA A Conference champion Archbishop Spalding squad. Bill Godrick, David Harding, Barrett Smith, Carter Sears and Tyler Blohm are all on the South roster, giving them one final opportunity to play with each other.

Bloom, VSN’s 2016 Pitcher of the Year, echoed those sentiments. 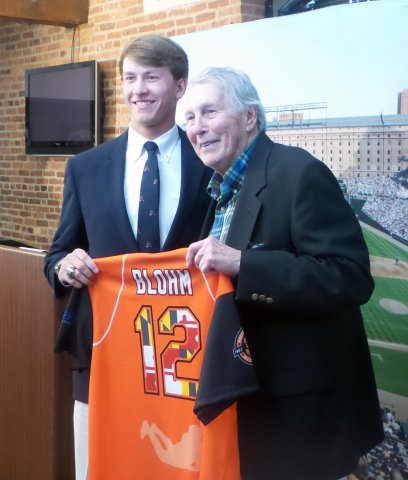 “It’s going to be an awesome experience. Growing up around here and always going to Orioles’ games, I think it is awesome to actually get a chance to play on the field,” said Blohm. “And, playing with the guys I grew up playing with, since I was 8-years old, I think it makes it even more special. Playing alongside them and getting to do it one more time before we all go off to college.”

Blohm, who is committed to pitch for the University of Maryland, was also drafted last week by the Orioles in the 17th round of the Major League 1st Year Player Draft. Should he forgo college to sign a professional contract, this may be just his first appearance at Camden Yards.

“It’s an awesome opportunity. I am not sure what I am going to do yet,” added Blohm. “As of right now it’s split, but whatever decision I make I am going to work as hard as I can to get through it. I am excited and looking forward to the future.”

Blohm got some food for thought from none other than Robinson, as he encouraged all of the players assembled on Thursday to give strong consideration to pursuing their education, during his opening remarks.

“In 1955 I had a four-year scholarship to the University of Arkansas to play basketball. I don’t even know if they had baseball at that time,” said Robinson, who ultimately passed on the scholarship to pursue his baseball career. “Think about going to college. That’s really what I missed. I would have been a lot better off in so many ways had I had a college education. It worked out fine for me, but I think I would have been a lot better off with a college education.”

Regardless of what this class of Brooks Robinson All-Stars does next, they are now part of an elite fraternity that includes many current and former major leaguers. They will also walk away with lifelong memories, as they live out their most treasured childhood dreams by playing in a major league ballpark.

Sunday’s game will take place following the major league game between the Orioles and Toronto Blue Jays, which is scheduled for a 1:05 p.m. start.

McDonogh and Mount St. Joe combine for six place winners at the Ironman