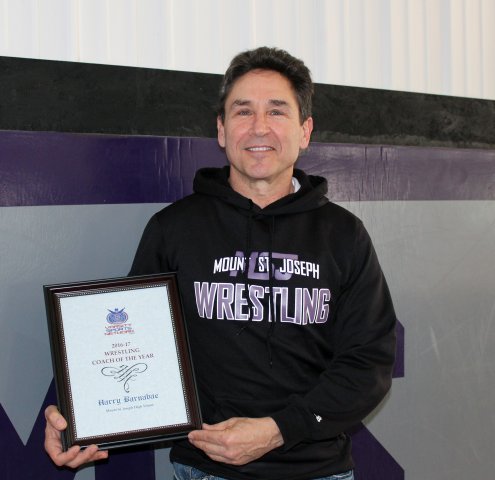 Mount St. Joseph has a long tradition of wrestling excellence in Maryland. That standing sunk to lows never seen at St. Joe prior to Harry Barnabae taking over as head coach in 2011. At that point, the once proud Gaels were no longer in the state rankings compiled by the Maryland State Wrestling Association.

Barnabae was a part of that winning tradition, capturing two MSA Championships, a National Prep title and a Fargo National Greco-Roman crown. The team, which was coached by Neil Adleberg during that era, won the team title at the National Prep Championships three-times.

“I knew we had our work cut out for us,” Barnabae said. “I was surprised that the team was unranked in the state. However, I knew that the school academically was in a position to attract the right student-athletes. Those that wanted to attend college and take it to the next level. We just needed to put together a quality coaching staff together, and offer them the platform to succeed.”

The winning ways returned completely this year, as St. Joe went wire-to-wire as the No. 1 team in the state per the Maryland State Wrestling Association. The Gaels won both the MIAA Dual Meet and Conference tournament titles, as well as the MIS (private school states) crown. At the state tournament, all 14 wrestlers placed in the top six of their weight classes, earning trips to the National Prep tournament.

“I was so proud of this team and what they accomplished. Each and every wrestler was instrumental in the overall success of the team. I recall mentioning to Shawn Orem that by the time he was a senior he would be on one of the best wrestling teams in the school’s history. I would have to say that this team arguably is one of the top five teams I have seen over the past 40 years. They truly worked together to win a state title. Pushing each other to do their best. Since the beginning of the season the team’s ultimate goal was to finish No. 1. Through our senior leadership, Orem and Neil Schuster, they were able to stay focused and accomplished just that.”

During the season, MSJ won titles at Lake Norman and Bubba Bunting dual tournaments, captured the War on the Shore title over 4A/3A state champions Damascus and 2016 private school state champions Good Counsel. In addition, the Gaels were runner-ups to Blair Academy at Mount Mat Madness and placed fourth at the National Prep tournament (the highest finish of any Maryland team).

“It’s been quite an honor to come back to a school so rich in wrestling tradition and be able to contribute to a program that has had so many successful coaches, wrestlers, and team championships over the past 40 years. I thought it would take four to five years to get the program competitive again. I knew there was talent in our Titan junior league program, however, those wrestlers were several years away from high School. So, we had to build the program from the beginning and it started with a core of very driven wrestlers. Initially it was Tyler Rill, Dan Hawkins, Alex Barnabae, Shane Lowman and Seth Rowell. Soon after, we added Zeke Salvo, Logan Rill and Sam Rowell. Once the Trybus twins arrived we were on the right path.

“In my opinion, we have the most accomplished coaching staff in the state of Maryland with two former St. Joe head coaches, Jay Braunstein and Alan Smith being added to the staff. Both coached state champion and national caliber teams. We also have assistants that are former Division 1 college wrestlers, Chris Combs, Brad Mutchnik, Kevin Johnson, Tyler Tippet,  Sean Forrester, Phil Turner and Gus Merino. It’s a terrific room to be a part of.”

The future is bright for the Gaels whose season ending lineup featured eight freshmen and sophomores. Barnabae cultivated most of these wrestlers through the Titans junior league program that operates out of Mt. St. Joe.

“I began coaching junior league in 1999 at the encouragement of my close friend Jay Braunstein, who at the time was the head coach of Archbishop Spalding High School. The team was called the Rebels and we were the feeder program for Spalding for 10 years until we moved to St. Joe. The first three dual meets, we lost each by over 100 points. I didn’t think you could score that many points in a wrestling match. Three years later that same group of kids went undefeated and were the top four in the state.  Now, almost 20 years later, many of them bring their kids to the Titans program for training.”

Five-run third drives No. 2 Spalding to a win over DeMatha