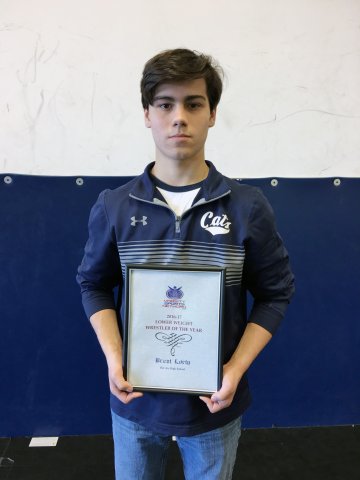 The Varsity Sports Network 2016-17 Lower Weight Wrestler of the Year, Bel Air’s Brent Lorin, is on pace to do something only one other Maryland wrestler has been able to accomplish; finish his career undefeated. The sophomore, who is 90-0, is on pace to join Owings Mill’s Steve Kessler in the ranks of undefeated four-time state champions. Lorin finished the season as the No. 1 113lber in the state by the Maryland State Wrestling Association.

“(I’m surprised) a little bit.,” Lorin said. “There’s a larger age group in high school. It took a lot of work to get there, but I think in junior league and as I progressed into high school I kept working hard so my skill-set got better. At the end, I was able to win that state title. I think it was a lot of hard work. It was a little bit surprising I would say. It’s insane (the 90-0 record). It’s an incredible accomplishment and it’s really nice to see all of the hard work that I’ve been putting into practice pay off.”

As a freshman, Lorin won the 106lb 4A/3A state title with a 4-2 win over Springbrook’s Christian Balmoris. In the semifinals, he handed Bethesda-Chevy Chase’s Eli Guttentag his only loss of the season, 3-1.

For an encore, Lorin won his second UCBAC title, dominating the field picking up two pins and a 21-6 technical-fall in the finals over Rising Sun’s 2A/1A state placer Jon Price. The Bobcats’ second 4A/3A East Region crown was won in similarly dominant fashion. After receiving a forfeit in the quarterfinals, Lorin used a major-decision, 18-6, over Anne Arundel County Champion Nick Schardt (Broadneck) to reach the finals. Lorin registered a fall in the first period of his finals match over Calvin Brumfield (South River).

In the 113lb state final, Lorin had his closest bout of the post-season, winning 3-2 over Parkdale’s county and region champion Axel Giron to cap off a 46-0 season.

Lorin, who’s best finish in the state tournament throughout junior leagues was second as an eighth grader, knows there’s a target on his back and the road ahead will be filled with challengers wanting to give him his first loss.

“You can’t always just expect to win a match, so you always know that any match is going to be a good match at that high level. You gotta really prepare for it, and if you’re not working hard and you’re not putting the time in you can’t expect to win. I definitely didn’t expect to win, but I knew that if I put in the work and effort that I could.

“It’s an incredible honor to be selected among so many talented light weight wrestlers. It came as sort of a shock that I was chosen,” said Lorin of his VSN award. “I’m incredibly proud to be selected, and it’s a great feeling to have my hard work throughout the season pay off in such a major way.”

Bel Air coach Craig Reddish feels like Lorin will only grow from this point forward.

“Brent is as unassuming a wrestler as I have ever coached,” said Reddish. “Brent is a high achiever in all things he does. He is driven and motivated to accomplish his goals and works hard to achieve them. He leads by example with a quiet steady approach. Brent is a thinker and analyzes the sport of wrestling technically. He is a great teammate and is willing to do anything to help the team. I think he will become more vocal in the future after letting the seniors have the opportunity to vocally lead the team. He understands who he is and what is expected of him. He is a reliable young man with the highest character. For someone who has accomplished so much on and off the mat, I am amazed how humble he is. He is on the path to becoming the most accomplished Bel Air Wrestler in school history. He makes everyone around him better.”

Calvert Hall triumphs in the District

Second half rally pushes Glenelg Country past No. 13 Pallotti