Once the exclusive domain of the nation’s premiere boys’ lacrosse programs, the PNC Lacrosse Invitational has diversified in a big way for 2017.

The annual showcase double-header played at Loyola University Maryland’s Ridley Athletic Complex, and broadcast to a regional television audience on the CW54, has added a girls game for the first time and what a game it is.

The event, scheduled for April 8th, will open with a 5:00 p.m. showdown between McDonogh School of Owings Mills, the nation’s top-ranked girls program, and Good Counsel of Washington, D.C., ranked No. 4 nationally, according to USA Today.

The boys will take center stage at 7:00 p.m. as the MIAA’s Loyola Blakefield, ranked No. 16 in the country, will tangle with Potomac’s Bullis School, which enters the season ranked No. 13 in the nation.

Wednesday morning at The Mount Washington Tavern, Corrigan Sports, the event’s promoter, hosted a press luncheon featuring coaches and players from all four teams, as well executives of PNC. 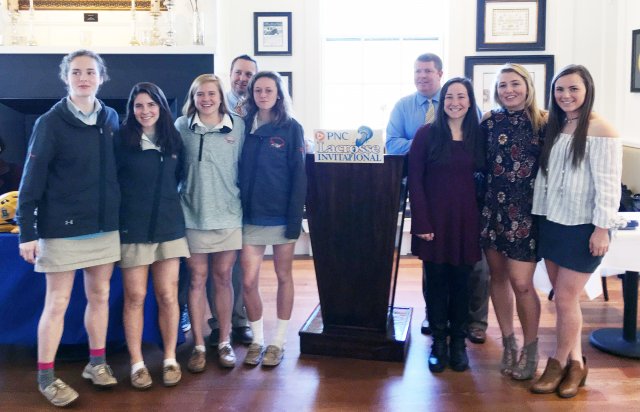 “We’re very excited to add a girls game to this event,” said Laura Gamble, PNC regional president for Greater Maryland. “It is something that was very important to us. PNC is committed to supporting Maryland’s lacrosse legacy by bringing together regional powerhouses for a heightened level of competition among the schools and to bolster the sport throughout the region.”

Having a press conference to promote a single game, even one as exciting as a match-up with Good Counsel, runs contrary to how McDonogh coach Chris Robinson normally helps his team navigate the pressure of maintaining a winning streak that is drawing attention from across the high school sports landscape.

“For us, it’s always trying to dodge that bullet of 155 in a row and win the next game,” said Robinson. “With my team captains sitting there, I just want to shelter them a little bit and say, no, we’re worried about our first game, but we are excited about this game.”

The Eagles will actually play 10 times before meeting the Falcons, starting with three strong opponents (Vero Beach, Fla., Milton, Ga. and Hill Academy, Canada) during a season-opening trip to Florida, starting March 15th, but McDonogh will be favored to enter the PNC Classic at 10-0.

“Certainly, we are playing a long-time rival, the best out of Washington, D.C., Good Counsel, and a long-time friend in Mike Haight,” said Robinson. “We know every time we go against Good Counsel, we’re going against a team which is extremely fast, very aggressive, well coached. It’s going to be a battle for that night. We’re returning a lot of great talent. We’re going to try to take it one game at a time, try to deflect the pressure, and hopefully come out on top in each game of the season.”

As far as Good Counsel is concerned, playing McDonogh is a challenge the Falcons embrace.

“We’re very, very happy about being invited to this daunting task of playing a team that has won 155 games,” said Falcons’ head coach Mike Haight. “We’re very honored to be playing at Loyola in a televised game. We’re going to do our best to dethrone the 20 year run of McDonogh, or whatever it may be at this point. Chris has done a phenomenal job and we envy his program and, hopefully, we’ll give him a great match-up come April 8th.”

Similar to the girls’ game, the boys’ game will feature dozens of Division I athletes.

Bullis is coming off the must successful season in the school’s history, as the Bulldogs posted a record of 21-2, won the IAC championship and finished the year as the No. 5 team in the country. They also defeated both MIAA finalists, topping Boys’ Latin in last year’s PNC Invitational and, later, topping eventual champion McDonogh.

“We’re going to have our hands full,” said Bullis coach Jeff Bellistri of the match-up with Loyola. “This is a great opportunity for us to showcase what we can do.”

Loyola enters its second season under head coach Ben Rubeor, a former Don standout who won a MIAA A Conference title as a player and a national championship as a star at the University of Virginia. Before returning to Blakefield, he coached at St. Mary’s for three seasons, winning the 2015 MIAA A Conference crown.

The Dons started quickly last spring, but struggled down the stretch and finished 9-7. Loyola, however, did qualify for the A Conference playoffs as they gained experience.

Rubeor believes the PNC Invitational is another valuable experience for his players and the other participating teams.

“It is a very, very special opportunity for boys and girls to be able compete on a big stage, on TV in a high pressure situation, against some very good competition,” said Rubeor. “We had a disappointing end to last season. I will say I have never seen a group of boys, that I have worked with, work harder in the offseason.

“We understand the challenge we have ahead of us. We are playing an extremely well coached, smart, intelligent team in Bullis. I am certainly excited to test ourselves against one of the best programs in the nation. I think it is a neat opportunity that two teams from two different areas, who have great history and tradition are able to suit up and go against each other.”

Pallotti gets a much needed win